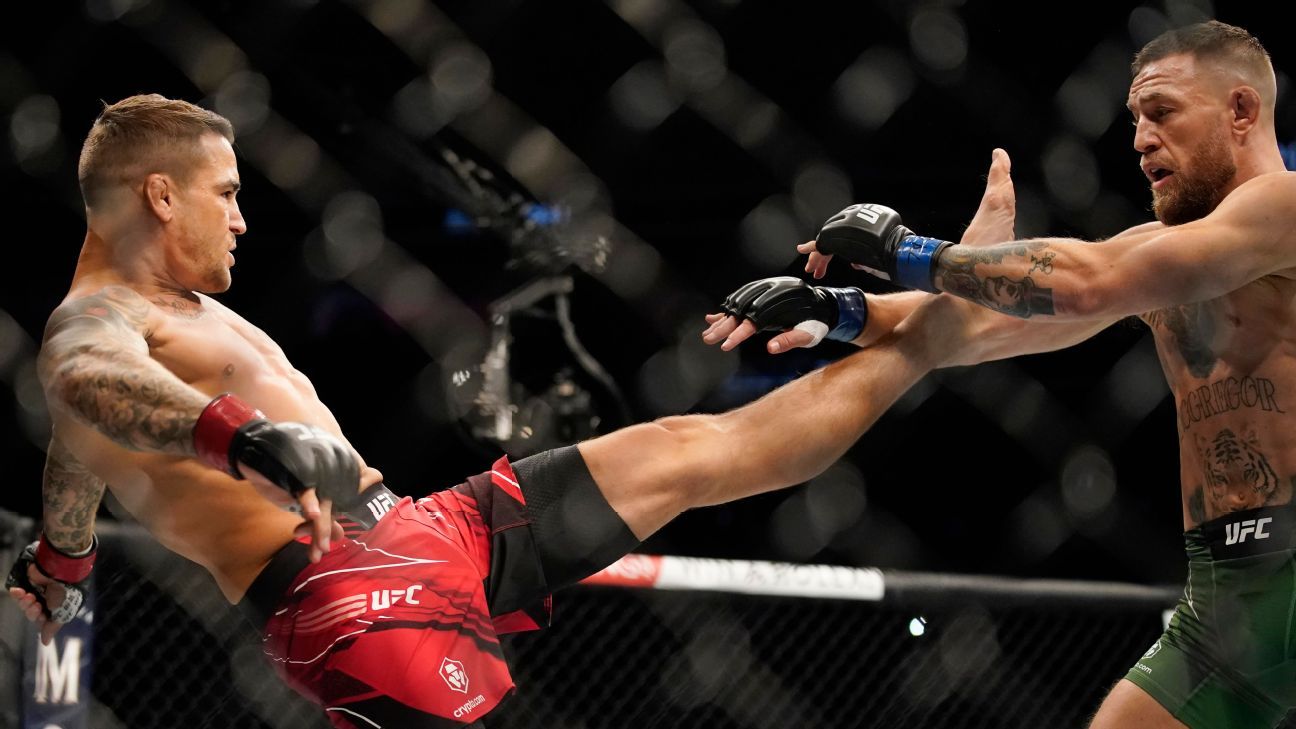 The UFC 264 main event only lasted one round, but Dustin Poirier did plenty in his victory over Conor McGregor to prove he deserves the first title shot at Charles Oliveira. Is Poirier already the best lightweight in the world?

As for McGregor, the misstep that caused a serious leg injury brought the fight to an abrupt end. Is an elite version of McGregor a thing of the past? And where does he go from here?

There were also consequences lower down the card. Sean O’Malley laid a history-making amount of damage on Kris Moutinho, and then called out Rob Font post-fight. Is it time for O’Malley to step up and see where he stands against a top-10 bantamweight?

Finally, the weekend was a mixed back for Irene Aldana. She picked up one of the most impressive victories of her career over Yana Kunitskaya, but after coming in four pounds over the limit, her future title hopes are a little dicier. Was the performance impressive enough to cover for the mistake?

Our panel of Brett Okamoto, Marc Raimondi, Jeff Wagenheim and Carlos Contreras Legaspi checks in on some of the biggest stories of the weekend to separate what’s real from what’s not.

The Conor McGregor of the past is gone forever

Stephen A. Smith reacts to Conor McGregor’s loss to Dustin Poirier and explains why he believes McGregor’s career to be on the downslide.

Raimondi: Coming into UFC 264, the question asked most was if the “old” Conor McGregor was back. The former two-division UFC champion was talking trash again. He seemed motivated. Intense. McGregor certainly appeared focused. Even if it was all a ruse and more effective in getting himself hyped up than getting into Dustin Poirier’s head, there was the vibe last week in Las Vegas that McGregor — in front of a full crowd for the first time in 18 months — was turning back the clock, and the killer instinct that marked the hottest rise in the history of mixed martial arts had returned.

McGregor looked loose as he walked to the Octagon on Saturday night. He brought back the arm-waving “Billi Strut.” And when the fight began, he reintroduced the kicking game that made him so dynamic as he tore through the UFC featherweight division from 2013 to 2015. McGregor landed nice front kicks to Poirier’s body, attacked Poirier’s legs and even landed a spinning back kick to the gut. This, it appeared, was hard evidence that a fire had been lit under McGregor. He had listened to the constructive criticism and went back to the old formula.

And then, just as quickly as that all manifested itself, the fight was over. Poirier got McGregor to the ground, and after landing hard ground and pound, Poirier let McGregor up to his feet and landed a combination that wobbled McGregor. When McGregor attempted to stabilize his left leg on the canvas, it buckled, and twisted gruesomely. McGregor collapsed to the mat and Poirier followed up with more punches.

McGregor somehow survived the round, but referee Herb Dean saw the Irishman was badly injured and called for the bell. Officially, Poirier had won by TKO (doctor’s stoppage).

It was an unceremonious end to what could have been an impressive comeback story. Of course, credit needs to be given to Poirier, who is quite possibly the best lightweight MMA fighter on Earth right now. The sold-out crowd at T-Mobile Arena came away unsatisfied. The sense of closure that usually comes with a trilogy fight was not there. Even Poirier admitted as much afterward. UFC president Dana White said there would likely be a fourth bout when McGregor heals up.

Dana White says he cannot confirm, but a rematch between Dustin Poirier and Conor McGregor is possible.

If and when that happens, we have to face the reality that McGregor, the most electrifying star in the history of UFC, will never be the same again, so I’ll say this statement is real.

This does not mean I don’t think McGregor can return to an elite fighting level. He will have the best medical care and rehab possible. If he wants to, he can come back strong. But the superstar that McGregor used to be has to be put in the rear-view mirror.

That display with Joe Rogan in the Octagon after the fight was not it. McGregor was still taking crass shots at Poirier’s wife, Jolie. He was still saying he was going to kill Poirier. Enough of that. McGregor used to be classy in defeat; that was certainly not the case at UFC 264.

We know now that rehashing the same tired fight-week act is not going to get him back there. McGregor is going to be on the shelf for a little bit, so he’ll have plenty of time to plan what could be an impressive story of resurgence. If anyone can do it, it’s McGregor.

Dustin Poirier is the best lightweight in the world

Wagenheim: The real answer here is, “We’ll see when Poirier challenges Charles Oliveira for the UFC championship later this year.” But who can wait for that reckoning to come? So if I’m asked to speculate based on what I know — or at least believe — right now, I’m going to say this is real. Yes, Oliveira owns the belt, but Poirier turned down an opportunity to compete for the title when it was vacant in the spring so he could make a fortune by completing his Conor McGregor trilogy.

Now, I want to point out that I’m not elevating my opinion of Poirier based on his second straight finish of McGregor on Saturday. At this point, it’s difficult to assess exactly what level of test the largely inactive McGregor presents, as his three losses in four fights came against the steel of the division (Poirier twice, Khabib Nurgmagomedov), but all were dominant finishes. No, Poirier was the top guy even before the weekend. He’s been situated ahead of Oliveira in both of ESPN’s top-10 rankings — lightweight and pound-for-pound — for many months..

That’s not to slight Oliveira, whose belt-winning performance in May was his ninth straight victory. It’s not to slight the man he defeated, Michael Chandler, or even fellow top contenders Justin Gaethje or Beneil Dariush. And let’s not forget the rising Islam Makhachev, the 19-1 Nurmagomedov training partner. Every one of them is formidable. I think Makhachev, in particular, has a championship run in his future. But right now Dustin Poirier, whose only loss in his last 10 bouts came against Nurmagomedov, is the man at the top at 155 pounds.

Sean O’Malley is ready for a Top 10 opponent

Okamoto: Real. I mean, the true answer to this one is … we don’t know. We don’t know whether O’Malley is ready to hang with the best of the division. But he’s “ready” from the sense of … it’s time to find out.

I’m not usually a fan of rushing young talent. Especially in the UFC, when the difference between fighting unranked opponents and opponents in the Top 10 is very significant. Oftentimes, these young prospects can really benefit from taking it slow and acquiring experience before they go title chasing. But in the case of O’Malley, he’s passed the eye test so many times at this point, it’s appropriate to throw him a real test.

He spoke Rob Font’s name post-fight on Saturday, which is an ambitious callout, no doubt. Frankly, I would have to favor Font in that matchup right now, as he’s more than proved he’s one of the best 135-ers in the world.

Is O’Malley in the same class as him? As of right now, at this moment, you can’t definitively say he is. But based on what I’ve seen out of O’Malley so far, I don’t think it would be inappropriate to throw him to the wolves and see how he fares, especially because that’s what he’s asking for.

Legaspi: Not real. She took a step back on Friday when she missed weight by over four pounds. Even though her performance against Yana Kutnitskaya at UFC 264 was arguably the best of her career — she showed power and recovered her effectiveness on the takedown defense — the promotion would likely want to see her make championship weight again before making her the next title challenger.

She had a fight scheduled for early June this year against former featherweight champion Germaine de Randamie, before de Randamie required surgery on her hand and stepped down. If de Randemie is ready to make a comeback by the end of this year, that could be the fight for Aldana to prove she’s worth that opportunity.

Still, the outcomes of the Amanda Nunes-Julianna Peña and the Aspen Ladd–Macy Chiasson fights in the upcoming weeks could change the circumstances in a hurry, and potentially in Aldana’s favor.

One thing to keep an eye on that’s outside of Aldana’s direct control is her appeal among the Mexican fan base. Brandon Moreno recently proved the impact of those fans, and Aldana is the only one bringing the hype to that potentially potent market among the women’s bantamweight contenders.