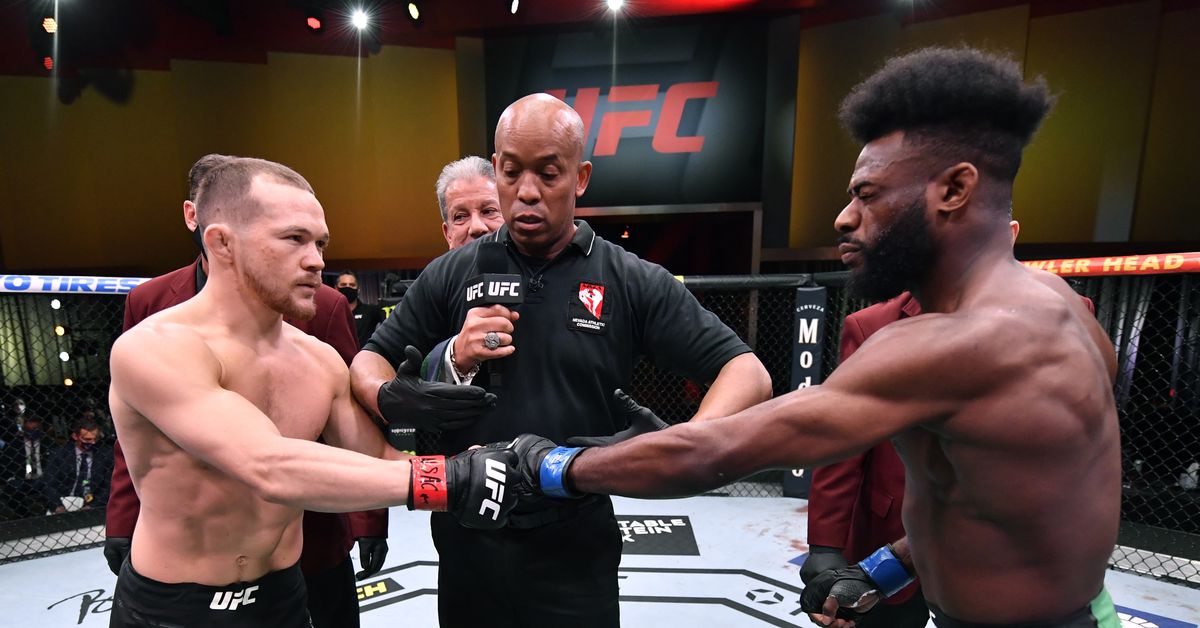 With a surgically repaired neck, UFC bantamweight champion Aljamain Sterling feels like a new person, and he’s ready to get his saga with Petr Yan all the way over with.

Things were personal between the former and current champ long before they stepped into the octagon in March at UFC 259. But things have only gotten more bitter after Sterling claimed the title via disqualification after Yan illegally kneed him in the head. Yan has accused Sterling of exaggerating his injury based on the knowledge that he’d win the belt if he couldn’t continue, and Sterling has been forced to defend himself against a small army of trolls and fans who questioned his character that night. None have been more prominent than the ex-champ, who got himself in hot water by filming a homeless man and calling him Sterling in a video he tweeted and later deleted.

“I don’t hate anybody. At the end of the day, we’re all chasing the same dream. But when it comes to people I would like to hang out with and I wouldn’t mind sharing a beer with, I think he’s a pretty sh*tty person outside of the sport, and I think his character speaks volumes about who he is as a person and as an individual. For me, I know what it’s like to be at the bottom, and I’ve worked super hard to get to this position, so for him to do that to other people who he doesn’t know, he can go f*ck himself.”

Now that he’s no longer seized by constant pain, Sterling is open to an Oct. 30 date in Abu Dhabi proposed by UFC President Dana White. Although he’d rather face his rival on home turf in November at a UFC event targeted for Madison Square Garden, he indicated ongoing trouble with getting cleared by the New York State Athletic Commission. Fighting Yan on Fight Island would put them on relatively equal footing, he said, because Yan also trains stateside.

The rivalry probably won’t come to an end whatever happens this fall, but Sterling believes he can prove he is worthy of holding the undisputed title with a win over Yan. The ex-champ had his best chance, he said, and by connecting with that knee missed his shot.

“I didn’t fall out of the sky and jump into a Dana White privilege opportunity to fight for a world title and get gifted with a guy who’s stupid enough to become the champion and not know the rules,” he said. “That’s on him.

“He had a layup. That was the worst performance that I could remember in a very long time, and he had a slam dunk to bring it home and solidify everything and shut up all the critics for himself, because he never fought anyone in the top-five. I fought three guys in the top-five. I beat them all, but I’m the paper champ. It’s ironic, but at the end of the day, I think this is a blessing in disguise. I feel good, I feel healthy, and I can’t wait to just remind the world what I’ve done was no accident and what he’s done, he got here with the Dana White privilege, and I can’t wait to shut him up.”

Concerning. Priscila Cachoeira’s ex-girlfriend has made some serious allegations.

Wolverine out. Omari Akhmedov’s time in the UFC has come to an end.

Get hyped for UFC Vegas 31 with some highlight-reel footage.

No love lost between Islam Makhachev and Rafael dos Anjos.

Logan Paul says he was more worried about Ben Askren than Tyron Woodley.

That’s one way to meet Khabib.

The Bully has bigger fish to fry.

A few things you didn’t know about A.J. McKee.

Some stiff midyear competition for “Knockout of 2021,” but in terms of significance, Adriano Moraes is tough to beat.

Some refreshing honesty from the West Linn gangster.

Chimaev Anticipates Meeting ‘The Reaper’ In Next Fight
Jan Blachowicz is grateful for the title shot 🙏
Breaking down McGregor vs. Chandler on TUF and in the Octagon
Classic McGregor Beats ‘Very Hittable’ Chandler
Despite Loss, Fedor At Peace With Retirement