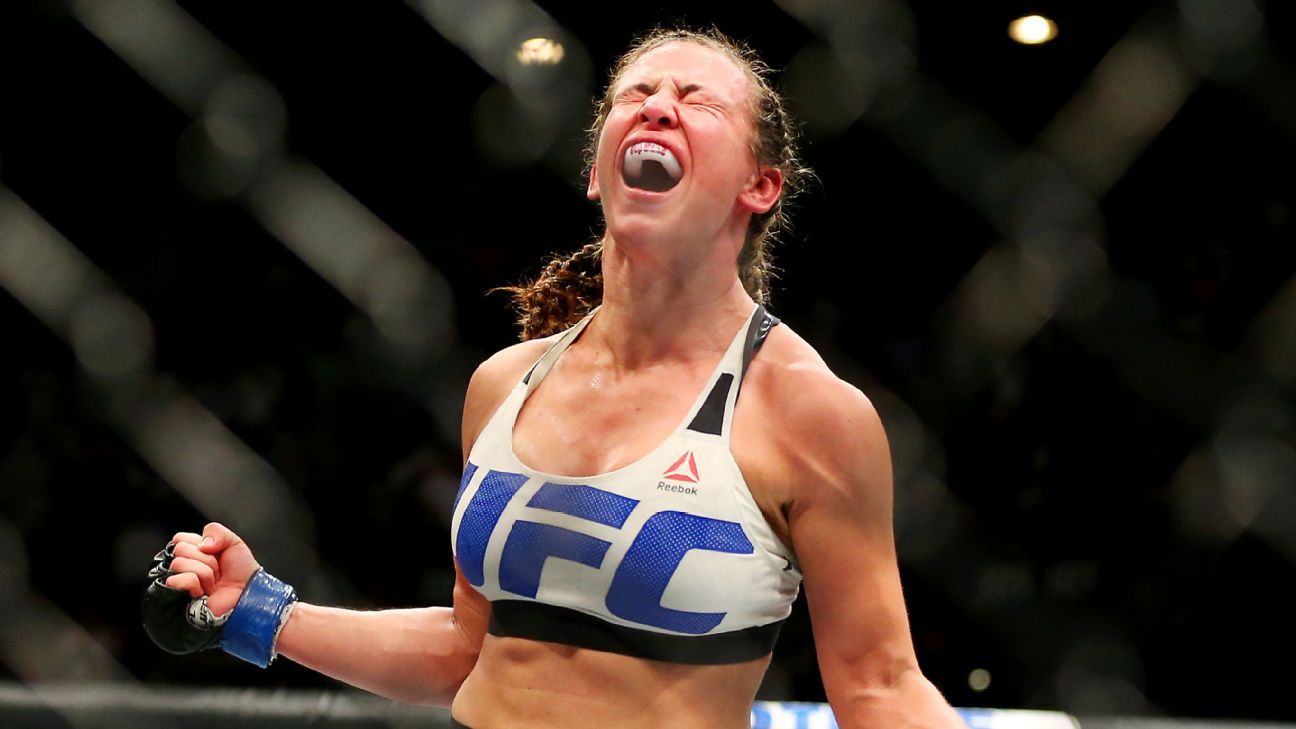 The women’s bantamweight division in the UFC has been in need of new blood for some time now — but no one would have guessed Miesha Tate would be the one to fill the void.

But that’s what it feels like going into Saturday’s UFC Fight Night in Las Vegas, where Tate (18-7) will make her first UFC appearance in more than four years. Now the mother of two, she will face Marion Reneau (9-7-1) in the co-main event under a headlining lightweight bout between rising star Islam Makhachev and Thiago Moises.

In a twist of irony, Tate’s first fight back will also serve as the final fight of Reneau’s career, as the 44-year-old has announced she intends to retire immediately after.

Tate, 34, is hardly a young prospect for this 135-pound division. In fact, she’s a bona fide pioneer of women’s MMA. She rose to prominence over a decade ago, when she won a one-night tournament to earn a shot at the Strikeforce championship. In 2011, she won that title by defeating Marloes Coenen, at a time when women weren’t even competing in the UFC yet.

One could argue that Tate’s career was pretty much a perfect story, just as she left it when she retired in 2016. She did lose, twice, to her greatest rival, Ronda Rousey, but those fights did a lot to elevate the female side of MMA.

And after losing to Rousey for the second time in 2013, Tate showed the heart and determination she was known for by grinding out a five-fight win streak that culminated in an upset victory over Holly Holm at UFC 196 for the UFC championship. And even though she lost her only two bouts after that — high-profile matchups against Amanda Nunes at UFC 200 and against Raquel Pennington in the first UFC event ever held at New York’s Madison Square Garden — Tate’s legacy was set. Rock solid. Nothing more to prove.

Her return, in the co-main event of a relatively quiet UFC Fight Night at the Apex, came unexpectedly. Tate always seemed very content in her decision to walk away. But it is nevertheless a very welcome return, as the UFC’s 135-pound division is short on contenders — the result of Nunes’ complete dominance over the past four years.

Will Tate emerge as an actual title threat? Who knows. She’s made it clear that getting back to a title is the purpose of this comeback. But regardless of how this goes, it doesn’t feel like one of those MMA comebacks that leave you with more concern than excitement. Tate doesn’t need to fight. This isn’t an example of a fighter who felt lost after leaving the sport. She appears to be here for reasons that are very healthy.

And however the comeback ends up going, it’s nice to see her back.

The fights are on ESPN and ESPN+, with the main card starting at 10 p.m. ET and the prelims at 7 p.m.

When Khabib Nurmagomedov abruptly retired from the sport following a successful title defense in October, which boosted his record to 29-0, it was surprising for a number of reasons. One is that at age 32 he was in the prime of his career. But it was also surprising because of that 30-0 goal of Abdulmanap Nurmagomedov — Khabib’s father and coach — who died in July 2020.

According to Khabib Nurmagomedov, however, the final number of his victories was not the critical part of Abdulmanap’s plan. The main goal was for Nurmagomedov to retire, vacate his title and see his longtime friend, teammate and fellow-Dagestan native Makhachev become his successor.

“I told Islam, ‘You a little bit late, brother. You only top 10. You’re supposed to be top three.’ This guy is late.”

Main event by the numbers

5: Fighters who have won eight straight bouts in the UFC lightweight division. If Makhachev wins on Saturday, he will be the sixth.

0.77: Strikes absorbed by Makhachev per minute in the UFC, the fewest of any fighter in the promotion’s history.

52.5: Percentage of Makhachev’s total time in the Octagon when he has been in control of his opponent. It is the second-highest control time for an active lightweight.

1.31: Submissions by Moises per 15 minutes, the seventh-highest rate among active UFC lightweights.

3: Consecutive wins by Moises. Adding a win Saturday would tie for the second-longest winning streak of his career.

“What’s funny is that Islam is not cocky; he will never be cocky. But he is what I like to call ‘feeling himself’ right now,” said UFC middleweight Deron Winn, who trains with Makhachev at American Kickboxing Academy. “He’s got that kind of swag when he walks in. It’s like, ‘Oh, Islam is here now.’ And I’ve watched him smash everybody in sparring. Every round. You could almost say — and Khabib Nurmagomedov will give me so much s— for saying this — but you could almost say his striking is better than Khabib’s was when he was at this point in his career.”

Check out how Winn and other experts break down the main event and predict a winner.

Miesha Tate’s return by the numbers

1,961: Days it will have been on fight night since Tate last won a fight (submission of Holly Holm for UFC women’s bantamweight title on March 5, 2016). Tate’s most recent fight was a loss to Raquel Pennington on Nov. 12 of that year — 1,709 days ago.

11: Submission attempts by Tate, the most in UFC women’s bantamweight history. She averages 1.31 submissions per 15 minutes, the second-highest rate ever in the division, behind only her good friend Ronda (3.03).

37:06: Control time for Tate, the fifth most all time in the women’s bantamweight division.

Five more things you should know (from ESPN Stats & Info)

1. Jeremy Stephens was supposed to fight Drakkar Klose in April, but he shoved Klose during a prefight faceoff and injured him, prompting the cancellation of the bout. Now the veteran lightweight is back for his 47th career appearance, looking for his first win in six fights dating to February 2018. Stephens (28-18, 1 NC) takes on 18-1 Mateusz Gamrot, who is coming off an April knockout of Scott Holtzman.

3. Billy Quarantillo, who had an eight-fight winning streak snapped in a loss to Gavin Tucker in December, will try to get back on track against featherweight Gabriel Benitez, who is coming off a knockout of Justin Jaynes that same month.

4. Daniel Rodriguez has won 10 of his past 11 fights, most recently beating Mike Perry in April. He takes on welterweight Preston Parsons, who is making his UFC debut — and has a loss to Perry on his record.

5. Amanda Lemos, who is on a three-fight winning streak, faces Montserrat Conejo in what promises to be a striker vs. grappler matchup. Lemos lands over six significant strikes per minute, while Conejo averages four takedowns per 15 minutes with an 80% accuracy rate.