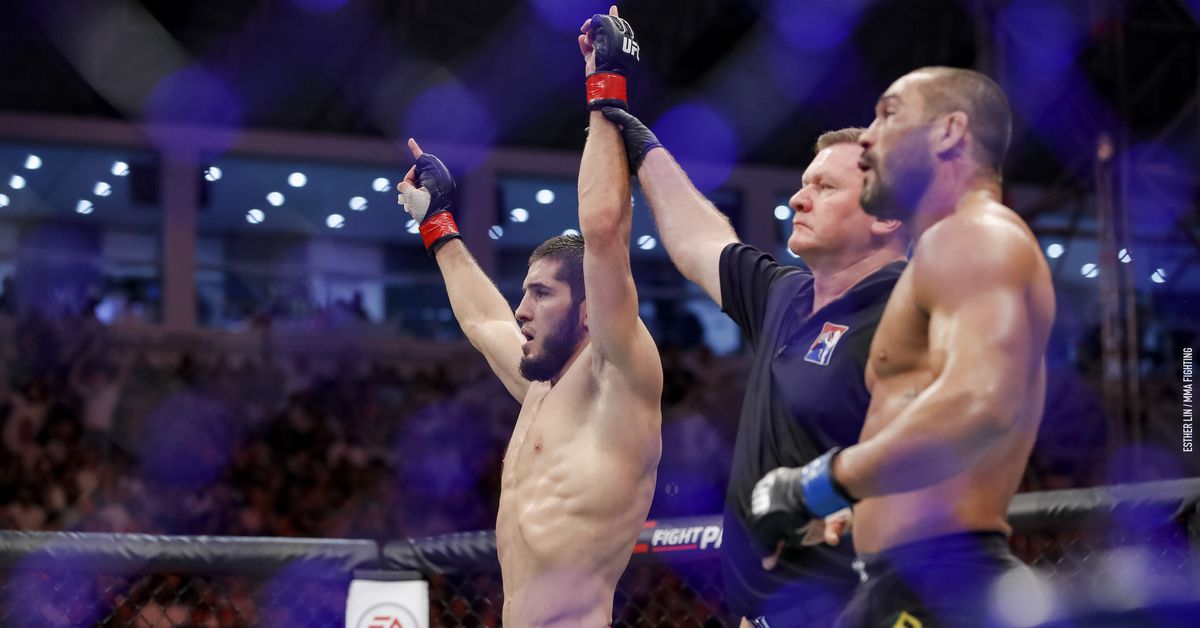 What better way to recover from a Conor McGregor fight week hangover than by focusing on two fighters who are actually relevant in the lightweight rankings?

Harsh, I know, but it’s time to cast off the drama that has pervaded the past few days and at least for a moment divert our attention to the contenders competing in Saturday’s UFC Vegas 31 main event, Islam Makhachev and Thiago Moises.

Makhachev, currently No. 7 in MMA Fighting’s Global Rankings, has thus far lived up to the hype as the second coming of Khabib Nurmagomedov; more importantly, he’s building his resume the same way, dominating whoever the UFC puts in front of him until a top-10 opponent is forced to finally face him.

Moises might not fit that criteria, but he’s a stiff test all the same. A wizard on the ground, he’ll make Makhachev work to keep him there while avoiding danger. It’s an appropriate test for the Russian fighter that many have pegged as a future champion.

In the co-main event, former UFC bantamweight champion Miesha Tate returns from a hiatus of over 1700 days after retiring in 2016 to pursue other opportunities and start a family. At 34, Tate is still in prime shape to make a run at the top, especially considering the dearth of contenders at 135 pounds. Her new beginning marks the end of opponent Marion Reneau’s time as a competitor as Reneau has announced this will be her retirement bout at the age of 44.

Where: UFC APEX in Las Vegas

When: Saturday, July 17. The entire event airs on ESPN and ESPN+, beginning with a six-fight preliminary card at 7 p.m. ET, followed by a five-fight main card at 10 p.m. ET.

Islam Makhachev is the real deal.

A victim of his own success, the rapidly evolving Sambo master has yet to show much weakness outside of a distant KO loss to Adriano Martins, and his style should work well even against the dangerous Thiago Moises. Moises can attack with a variety of submissions from the bottom, certainly, but he’ll be swimming upstream every time Makhachev puts him on his back, which should be early and often.

On the feet, Moises’ excellent striking defense gives him a chance and he has plenty of raw power in his hands and feet. Makhachev also knows how to avoid damage during exchanges, so this could be a standup chess match until it goes to the ground. Were one of these two men to win by a surprising knockout, I would pick Moises to do it.

But I see this one going the distance and if that’s the case, Makhachev has all the tools to take Moises apart one round at a time. The march to an inevitable title shot continues.

This is a fine piece of matchmaking and the perfect return test for Miesha Tate.

From what we know of Tate, she should have Reneau beat on paper. She’s a better wrestler, has always had great submissions, and she’ll have an athleticism edge as well. The big question is, well, can she still fight?

That might seem like a silly thing to ask of a women’s MMA pioneer who has held world titles in the UFC and Strikeforce, but we can’t discount the fact that it will be almost five years between fights when Tate steps into the cage again on Saturday. Can she pull the trigger again or will she freeze like she did against Raquel Pennington? How will she react when a gritty Reneau stays in her face for three rounds? Will she be thrown off by the fact that there are no fans at UFC APEX? Her most recent fight was at Madison Square Garden!

Again, on paper, Tate is the better fighter. We know this. But she’s going to get cracked at some point and how she reacts to that will tell us not just the story of the fight, but how the rest of her comeback could go.

It won’t be easy, but Tate by decision.

UFC fans are just scraping the surface of what Mateusz Gamrot is capable of. That said, he’s going to have to be mindful of a freshly motivated Jeremy Stephens.

Perhaps that’s giving Stephens too much credit, but he hasn’t won a fight in over three years and this is his first time in a while he’s facing an opponent that isn’t ranked top-10 in their division. If he can’t step up for this fight, there might be no motivating him. Stephens’ hands are as fearsome as ever, though Gamrot isn’t likely to shy away from a firefight.

Gamrot will be wise to stay patient and load up his left hand in anticipation of Stephens leaving himself vulnerable because that will happen at some point. I see Gamrot as the more patient striker. If this goes to a decision, he’ll have a clear edge, but I’m thinking he puts Stephens down inside the distance.

If the plan was to give Rodolfo Vieira a bounce-back opponent who will give him the opportunity to show off his grappling skills, then the matchmakers came to the right place.

Dustin Stoltzfus is a strong grappler in his own right and a grinder. If Vieira is careless with his cardio like in his loss to Anthony Hernandez, he could easily stumble into another loss. Stoltzfus can be creative with his submissions too and he won’t hesitate to take a risk against Vieira.

However, Stoltzfus’ willingness to grapple could also be his downfall. Vieira is an absolute python on the mat and he’ll be hunting for a quick finish to wash the bitter taste of his first career loss out of his mouth. There could be some fun scrambles and gorgeous transitions in this one, but in the end I see Vieira snagging the submission and getting back on track.

Gabriel Benitez couldn’t have made his return to 145 pounds more difficult.

First, he’s stepping in on about six weeks’ notice for an injured Herbert Burns and second, he’s facing one of the UFC featherweight division’s most promising newcomers in Billy Quarantillo.

Quarantillo has proven to be a ridiculously tough out since signing on from the Contender Series. He’s light on his feet, a hard hitter, and he can be unpredictable. On the other side, the more experienced Benitez knows a thing or two about masking his strikes and surprising opponents with an explosive flurry. These two are going to have a hell of a time figuring each other out.

On the ground, I’d give Quarantillo the edge, but Benitez is no slouch down there. The Ultimate Fighter: Latin America winner is quick to attack with submissions and he’s plenty strong especially back at featherweight. There could be some stalemates on the ground and along the fence, so expect this one to take place primarily on the feet.

This Fight of the Night candidate is the toughest pick on the card for me. I’ll go with Quarantillo to push the pace as the fight goes on and pull away in the second or third round en route to a finish or a comfortable decision win.