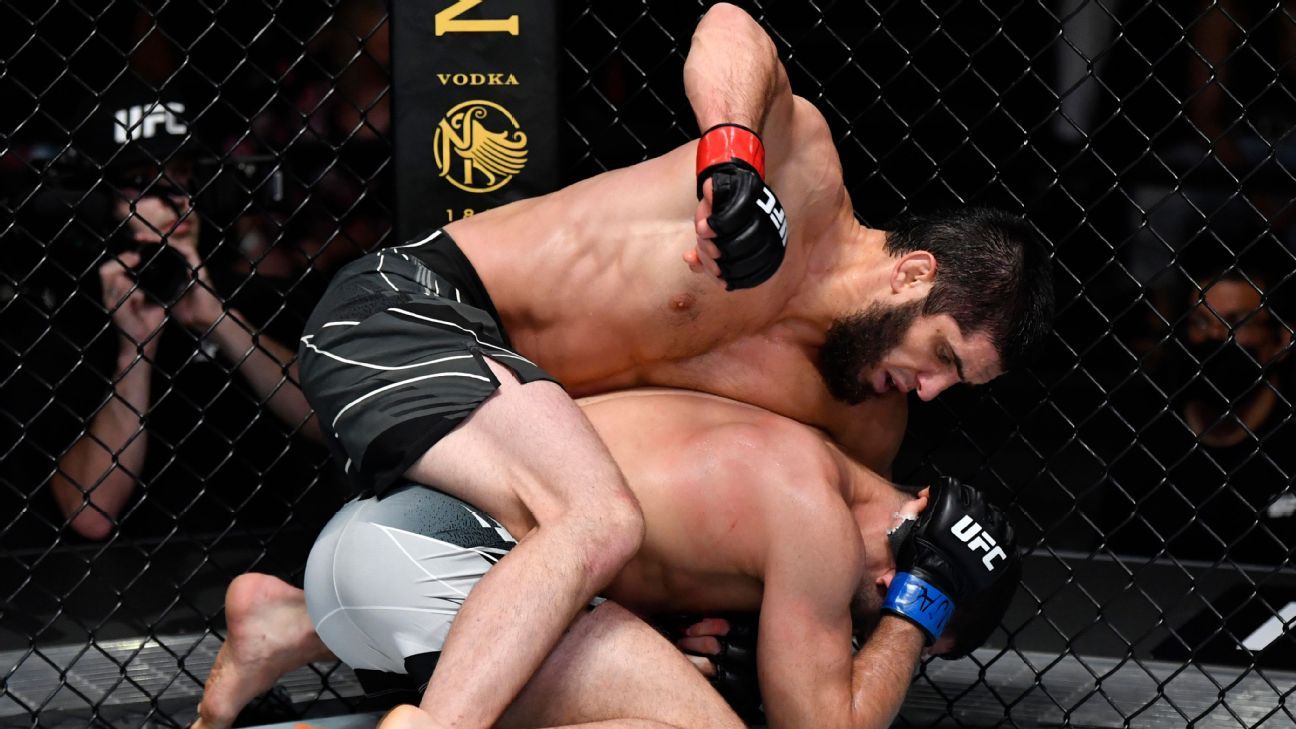 All eyes were on Islam Makhachev on Saturday night. Heading into his first UFC main event, those surrounding the fight game talked up the Dagestani star and pupil of Khabib Nurmagomedov. He answered all questions and thoroughly dominated Thiago Moises before ultimately submitting him in the fourth round.

The top of the lightweight division is officially on notice, as are the strawweights who watched as Amanda Lemos scored another knockout victory. Lemos’ power is eye-opening, and it’s likely that her next fight, which she hopes will come later this year, will be against a top contender in the division.

But perhaps the biggest statement of the night was made by Miesha Tate. Returning after five years away from the sport, Tate looked like she never left and coasted to a third-round finish against Marion Reneau. Will Tate meet a familiar face in her next fight in the Octagon? Did she immediately join the title contenders with this first step back?

Makhachev is a future lightweight champion

Okamoto: I feel like Islam Makhachev could fight for the title tomorrow. He’s ready. And I would say it’s more likely than not that he ultimately will win the championship.

All fights from UFC Fight Night: Makhachev vs. Moises are available to watch on ESPN+.

Right now, I don’t think oddsmakers would favor a single lightweight over Makhachev. I think he’d be the favorite against Charles Oliveira, Dustin Poirier, Justin Gaethje, Michael Chandler — all of them. When Makhachev was scheduled to fight Rafael dos Anjos last year, he was favored by more than 5-to-1.

What did he prove on Saturday in his win over Thiago Moises? Nothing too wild that we already didn’t know — but it was reminiscent of his former teammate and current coach Khabib Nurmagomedov in that you’re forced to really try to look for areas to nitpick. Moises was able to hold him against the fence a bit in the second round, I guess? Moises nearly took his back for a split second, before completely losing the position. What else can you point to?

We used to do the same with Nurmagomedov. Hey, Michael Johnson hit him one time, and it looked like maybe he was rocked for half a second. He wasn’t able to finish some of his competition, even when they were clearly overmatched. Could his cardio last during a longer fight? We nitpicked, and then when Nurmagomedov entered his true prime — age 30, his championship run — he dominated the best of the division in a way that showed he was several levels above.

Will Makhachev do the same? Honestly, that’s the expectation at this point. Because I’m looking for things to critique here, and I’m not finding many. And I bet the rest of the UFC lightweights aren’t finding many either.

The best fight for Makhachev now, in my opinion, would be Tony Ferguson. And before you say I’m kicking Ferguson while he’s down — he’s lost three in a row — I think it would actually be the best fight for Ferguson to take. Yes, the challenge is great, but so is the upside.

Ferguson is in the worst slump of his career, but interest would be sky high for a fight between him and Makhachev. Nurmagomedov vs. Ferguson fell apart five times — it’s the fight that got away in mixed martial arts. Revisiting it, in a way, with Makhachev vs. Ferguson would be huge. And imagine if Ferguson pulled it out. He’d jump right back into title contention. All that said, however, I’m guessing Makhachev’s next fight will be against Rafael Dos Anjos.

Raimondi: Miesha Tate had not fought since 2016, a lopsided loss to Raquel Pennington at UFC 205. She retired afterward. After nearly five years away, the expectations for her return were tempered — as they should have been. Tate had two kids while away, and was working as an executive with ONE Championship in Singapore. Her comeback, when it was announced in March, seemed to come out of nowhere. But the former women’s bantamweight champion — and one of the most popular female fighters in MMA history — shattered those expectations completely.

Tate dominated Marion Reneau on Saturday night in her return bout. She looked as good as she ever did, despite the lengthy layoff of 1,708 days, which is the longest gap between UFC fights for anyone who didn’t compete in another promotion in between. Reneau had never been finished before. Tate, meanwhile, has never been much of a finisher. She didn’t have a TKO victory in the UFC before Saturday night.

Tate deserves a ton of credit. She put in the work. She was clearly in tremendous shape. She also seems like she’s in a good place in her life as a mom with her partner Johnny Nunez. It’s obvious this isn’t just a money grab for her — she’s serious about a comeback.

After winning against Reneau, she reiterated that she has returned not just for this win, but to try and win back the title. Amanda Nunes has been the champion since she stopped Tate via submission at UFC 200 in July 2016. Who knows what’s next for Tate, but it’ll likely be a big fight. Holly Holm, whom Tate beat for the title, has already expressed interest in a rematch. That could end up being a title eliminator. It’s crazy to think Tate could be challenging for a shot at the belt in 2022, or even late 2021. But it doesn’t seem all that wild after seeing how good she looked Saturday.

Women’s bantamweight is a sluggish division. Nunes has dominated everyone in her path. Things have been stagnant, seemingly since Tate left. Well, “Cupcake” is back now and giving that weight class a much-needed shot in the arm. There are many more interesting matchups now than there were before Saturday at women’s 135 pounds, and it seems we’re looking at some exciting, unexpected times to come in that division.

Mularski: Amanda Lemos showed up and showed out for the 500th women’s UFC fight with a 35-second KO over Montserrat Conejo, the second fastest finish in UFC’s strawweight history. There’s no doubt her force and accuracy make her a top contender in the strawweight division, and even a potential champion. Lemos now has four straight wins, which is tied for the 3rd-longest active UFC win streak in the division.

Lemos showed off her striking power with a knockout of Livinha Souza on March 6. On Saturday, she proved it was no fluke. Lemos is an accurate striker, and as she progresses her power will allow her to match up well with two of the other heavy strikers at the top of the strawweight division — champion Rose Namajunas and Zhang Weili.

“I don’t know why two top 5 opponents refused to face me, but I’m here, I’m waiting,” she said. “I want to fight. No matter who my opponent is. If they didn’t want to face me now, there will be a time when they won’t be able to run away from me.”

She’s right. If she keeps this up, the top contenders in the division will need to take a fight with her if they want to hold their place in line. Lemos said she wants to fight in October, hopefully on Fight Island, and after this current run of knockouts she’s become must-see and a potential star in the marking.