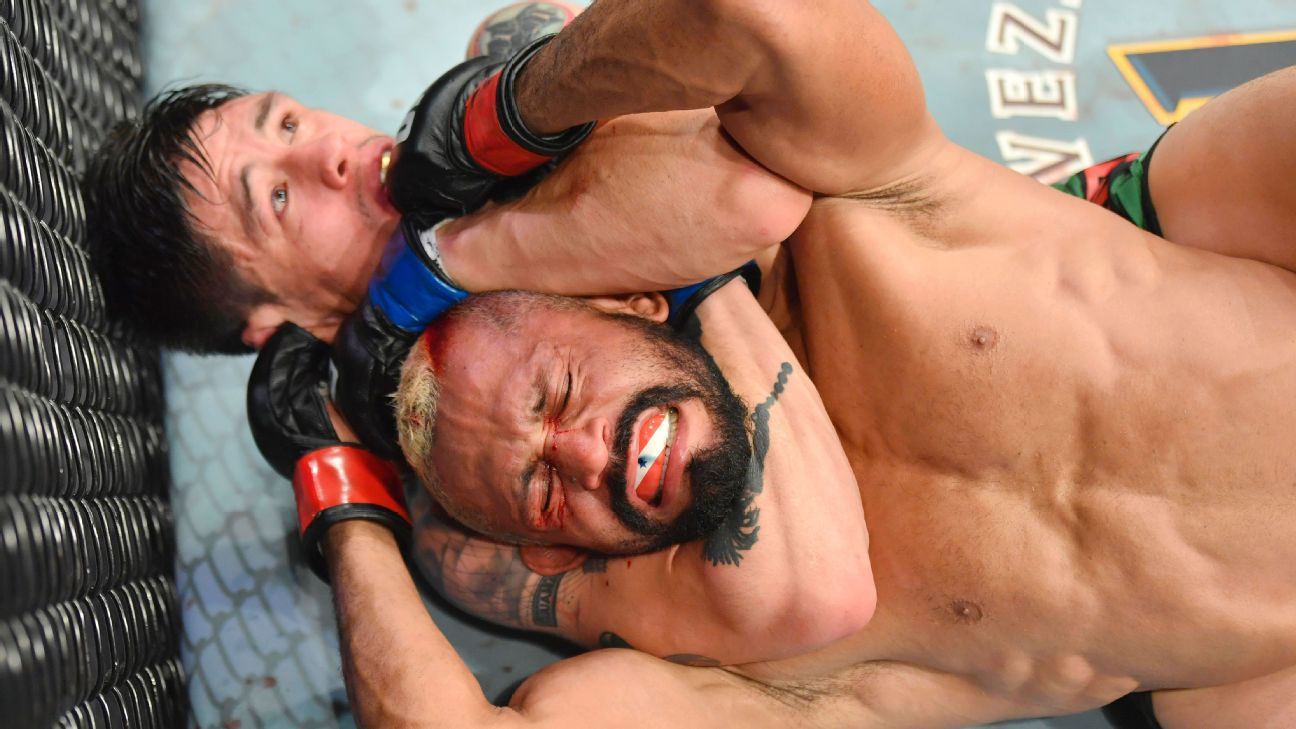 LOS ANGELES — Brandon Moreno is not sure who will be his first challenger. But he believes the man whom he took the belt from might need to do more to deserve a shot.

Moreno, the new UFC flyweight champion, said Tuesday at a media lunch that he knows Deiveson Figueiredo wants a trilogy fight for the belt. He said he’s open to that if that’s what the UFC wants to do, but he believes Figueiredo needs to shore up his résumé before another crack at the title. Moreno stopped Figueiredo by third-round submission at UFC 263 on June 12 to win the flyweight gold and become the first-ever Mexican-born champion in UFC history.

“The next name? I don’t know,” Moreno said. “There are a lot of possibilities. I think it’s obvious Figueiredo wants the next one, because he lost the last one. But man, last fight I dominated him since the first minutes of the first round. I dominated him — in the striking, in grappling, in wrestling. Obviously, I’m open to fight again with him. But I think he needs to fight again with somebody [else].”

Another potential opponent has popped up recently. Cody Garbrandt, the popular former bantamweight champion, has expressed his interest in moving down to flyweight. Garbrandt was actually scheduled to fight Figueuredo for the flyweight title last year before withdrawing due to a severe bout with COVID-19. Garbrandt has dropped four of five, but remains a draw and one of the most exciting fighters in the lower weight classes.

“Cody Garbrandt wants to come to the division,” Moreno said. “It’s a huge fight, because I know he’s not in the best part of his career, but he’s a good name. He’s a former champ. He has a really good brand behind him. He’s an option.”

Moreno (19-5-2) fought Figueiredo to a majority draw at UFC 256 last December, which set up the rematch last month. The 27-year-old is unbeaten in seven straight fights. He said he’d like to return to the UFC in November. Currently, he’s on a lengthy media tour, which included him attending a soccer game in Los Angeles involving the Mexican national team and meeting Mexican president Andres Manuel Lopez Obrador two weeks ago. Moreno said he plans on getting back to his Tijuana gym, Entram, beginning in August.

“I don’t care the name,” Moreno said. “I just want to fight on that date.”