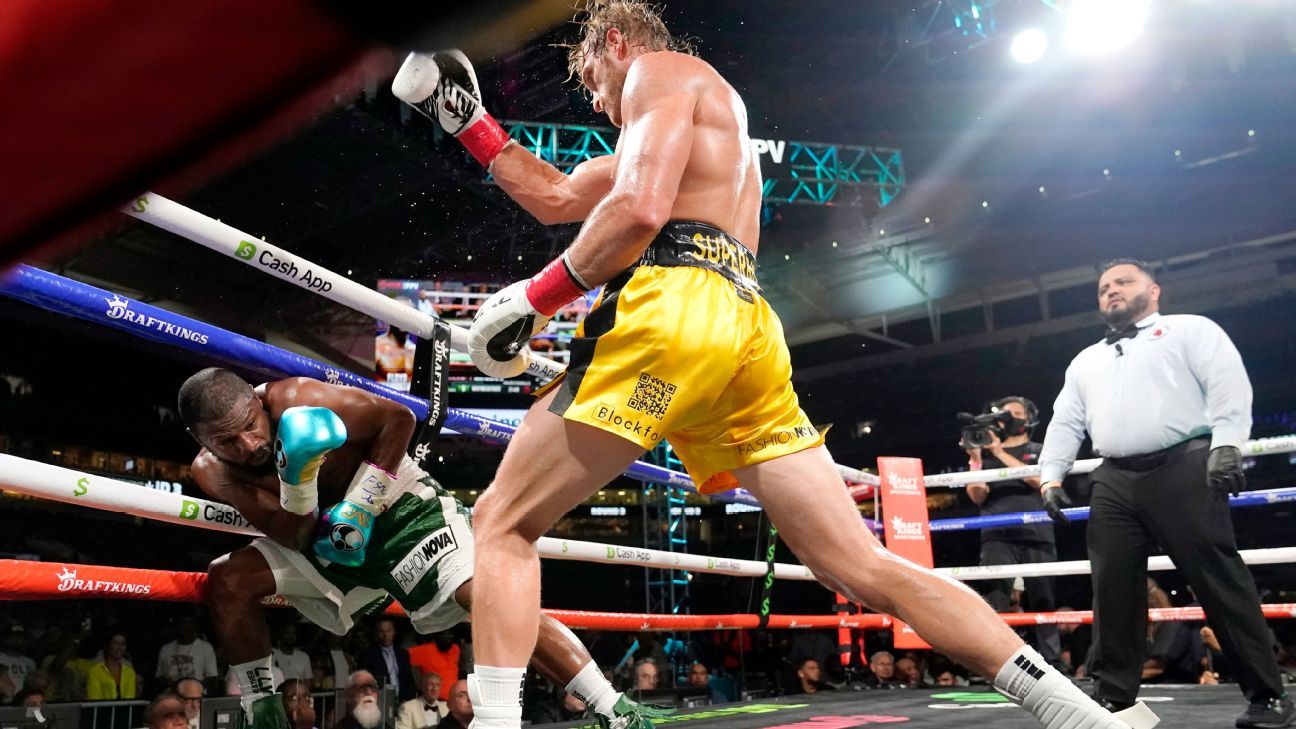 Logan Paul and Anderson Silva aren’t boxers by trade, but they could meet in the ring.

Paul, 26, competed in an exhibition boxing event with Hall of Fame fighter Floyd Mayweather in June, a Showtime pay-per-view that was a tremendous commercial success.

The bout, which was an unsanctioned fight with no official winner, lasted the eight-round distance.

“I’ll be putting on prizefights,” Paul said following the event when asked what was next. “I’m sure there’s a list of opponents on Twitter, people chirping, saying this, saying that. I’ll pick one, make ’em get f—in’ embarrassed.”

Paul’s weight limit for that meeting was 190 pounds; Mayweather’s was 160.

There’s no determination if the event with Silva — assuming a deal is completed — would be a sanctioned boxing match or a novelty exhibition.

“We just haven’t got there yet,” Levin said.

Paul is 0-1 as a pro fighter, his loss coming via decision against fellow social media personality KSI in November 2019. Since then, Paul has pushed beyond the social media sphere with an appearance at WrestleMania 37 in April, followed by the exhibition with Mayweather.

His younger brother, Jake, is 3-0 as a professional fighter and is starting to gain some traction in the boxing world. The 24-year-old scored a first-round knockout of former UFC fighter Ben Askren in April. He’s set to face former UFC champion Tyron Woodley on Aug. 29 in Cleveland, a hometown fight for Paul on Showtime PPV.

Silva, a former UFC middleweight champion who holds the record for longest title reign in the organization’s history (2,457 days), scored an upset of Julio Cesar Chavez Jr. last month in Guadalajara. Chavez, a former middleweight boxing titleholder, is well past his best days, but considering Silva’s age (46) and limited boxing experience (third pro fight), it was an impressive achievement.

“I love fighting and boxing is my dream for many, many years,” Silva said after the eight-round split-decision victory, a bout contested at 182 pounds. “I need to prove my respect for boxing.”

“The Spider” made his pro boxing debut in 1998. More than seven years later, he competed in the boxing ring again, this time scoring a second-round KO in 2005. The Brazilian made his UFC debut the following year.

Silva is one of the most recognizable draws in MMA history, with 18 headline appearances on UFC PPV. He suffered a fourth-round TKO defeat to Uriah Hall in October — his seventh loss in his last nine outings in the Octagon — and was released by the UFC one month later.

UFC fans WILL BE UPSET, after UFC superstar out of UFC 286 PPV, Jon Jones and Ciryl Gane reactions
Hill Invites Pereira To 205: ‘I’ll Knock Him Out’
UFC fans ARE SHOCKED after latest UFC suspension, Francis Ngannou gets new offers, Aljamain Sterling
BKFC 35 results and free live video stream (8 p.m. ET)
Conor McGregor accused of attacking woman on his yacht in July: ‘He is a criminal’