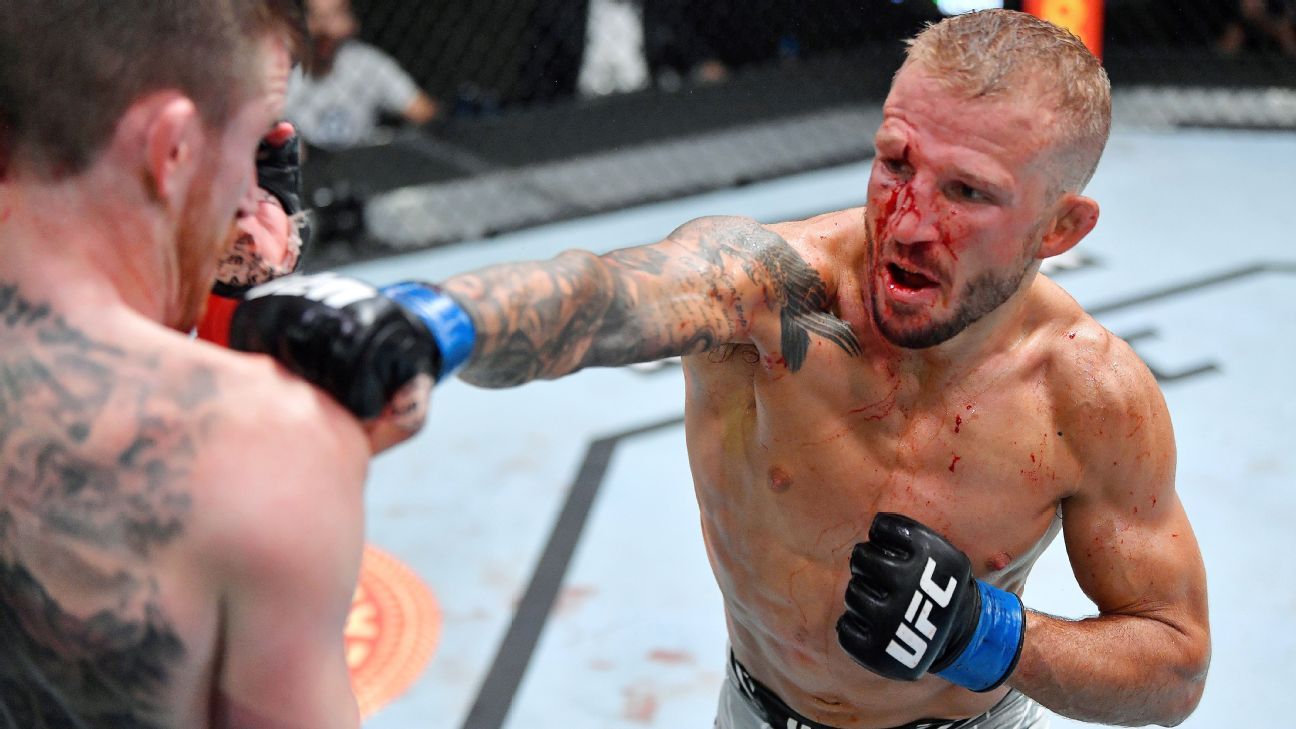 Saturday’s UFC Fight Night main event between TJ Dillashaw and Cory Sandhagen lived up to the lofty expectations surrounding one of the most anticipated fights of the year.

Dillashaw emerged victorious by split decision, potentially setting himself up for a future shot to reclaim a title he never lost inside the cage. But should his suspension for EPO doping prevent Dillashaw from being able to hop right back to the top after paying the price of two years in the prime of his career?

The main card was tight throughout, with an additional majority decision and split decision among the results. Maycee Barber claimed that split decision over Miranda Maverick, and it was far from the clear victory she was after. But was it enough to put Barber back on the right track in her career?

Finally, on a night of top prospects, two stood out.

Dillashaw served his time, now time for a title shot

Raimondi: TJ Dillashaw cheated. He injected himself with EPO, got caught, was stripped of his UFC bantamweight title and handed a two-year suspension from USADA. Dillashaw admitted he used the prohibited substance, and that he did so in order to drop from bantamweight to flyweight.

That issue is likely to hang over Dillashaw’s head for the duration of his career. Every opponent will likely bring it up. No one is saying that it should be forgotten about, or that Dillashaw was treated unfairly. He was not. But he also served his time. And after his performance Saturday, a split decision win over Cory Sandhagen, Dillashaw deserves another shot at the title he never lost in the Octagon. 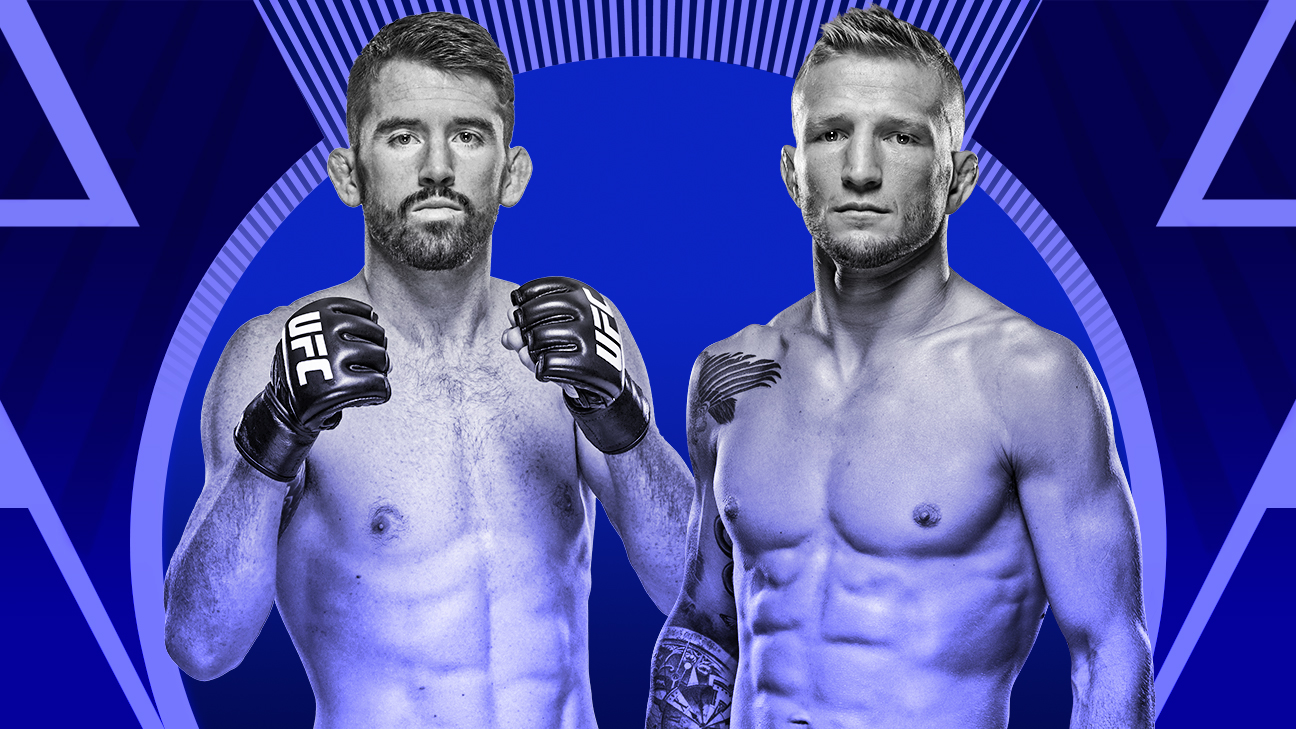 All fights from UFC Fight Night: Sandhagen vs. Dillashaw are available to watch on ESPN+.

Maybe that’s an unpopular take. But Dillashaw’s résumé as it stands now is arguably the best out of any bantamweight in MMA history. Sandhagen was ranked No. 3 in the division by ESPN. The only men above him were Aljamain Sterling, the champion, and Petr Yan, the next challenger and the former champ. The math on that says one thing: Dillashaw put himself in pole position for the winner of that Sterling-Yan title fight, which is currently being targeted for October.

Dillashaw was not perfect Saturday night. Sandhagen had many positive moments. Some felt he was the rightful winner, including judge Derek Cleary, who scored the second, fourth and fifth rounds for Sandhagen. But all the credit in the world has to be given to Dillashaw, who experienced zero ring rust. He fought through a knee that Sandhagen injured with a leglock attempt in the first round. He fought through a bad, bloody, deep cut Sandhagen opened up in the second round. Dillashaw was the fresher, more active fighter late in the fight.

When Dillashaw was suspended in 2019, he was the best bantamweight in the world. Two years have passed and his reputation has been forever damaged. But the truth is, Dillashaw still might be able to stake that claim as the best in the world at 135 pounds. In his next fight, the polarizing scrapper should get the opportunity to prove or disprove that.

As for Sandhagen, he lost the fight, but he’s just 29 years old and was one or two big blows away from taking a victory home with him to Colorado. He doesn’t lose much stock here. The one problem he might face in the immediate future is that he has lost to Dillashaw and Sterling, taking two of the top bantamweights in the world out of play for the time being. A fight next against someone like fellow up-and-comer like Rob Font could be very interesting.

Barber gets an emotional victory, but not a decisive one

Legaspi: Maycee Barber got the win she needed, but definitely not the one she wanted.

After the first two losses of her career, against Roxanne Modafferi and Alexa Grasso, Barber left the Midwest and is now training under Urijah Faber at Sacramento’s Team Alpha Male.

Two judges saw her win the second and third rounds, and that should get a lot of pressure off her back, because she claimed herself to be “The Future” of the 125 division, and an 0-3 streak would have been devastating for that reputation.

She clearly took the third against Miranda Maverick, but the second was really close, and the small crowd at the UFC APEX showed surprise after hearing the official decision — far from a “robbery,” but it’s still a split win against a prospect with less experience under the UFC banner. That shouldn’t be enough to get her back into the top 10 of the flyweight rankings.

Barber did look a lot more relaxed during fight week, and has a lot to learn in her new camp. The results of that work will be visible in her next couple of appearances in the Octagon. She feels that she recovered the joy in training for a fight, and we’ll have to see if the confident Barber is back soon.

With a second-round TKO of Randy Costa in a brutal bantamweight clash, Yanez became the first man ever to win his first three UFC fights by knockout at 135 pounds and below.

The finish came courtesy of a sneaky right uppercut that floored Costa, before a flurry of strikes on the ground ended matters. The stoppage was the 27-year-old’s seventh consecutive victory, and now the Texan appears on the brink of a meaningful opportunity.

But he wasn’t the only one who stood out. Imavov delivered, too, with a second-round TKO of Ian Heinisch, announcing his arrival as a fighter to watch at 185 pounds.

Sure, Heinisch entered the Octagon having lost three of his last four fights, but all those defeats came via decision. Two of those setbacks came against top 10 light heavyweights Derek Brunson and Kelvin Gastelum.

So it’s especially impressive that Imavov was able to finish Heinisch, and with relative ease, too. A knee was the beginning of the end, before the 25-year-old connected on a plethora of punches along the cage, forcing the referee to intervene.

Imavov, who was born in Dagestan and now trains in France, started boxing at age 10, and it showed. The punches flowed seamlessly, and the jab was pinpoint accurate throughout the fight. Imavov had to settle for a majority-decision loss to Phil Hawes in February, but after Saturday’s win he’s once again one of the hottest prospects in the UFC.

Training alongside heavyweight contender Ciryl Gane at the MMA Factory in France, Imavov is clearly ready for an even tougher test in his next outing in the Octagon.