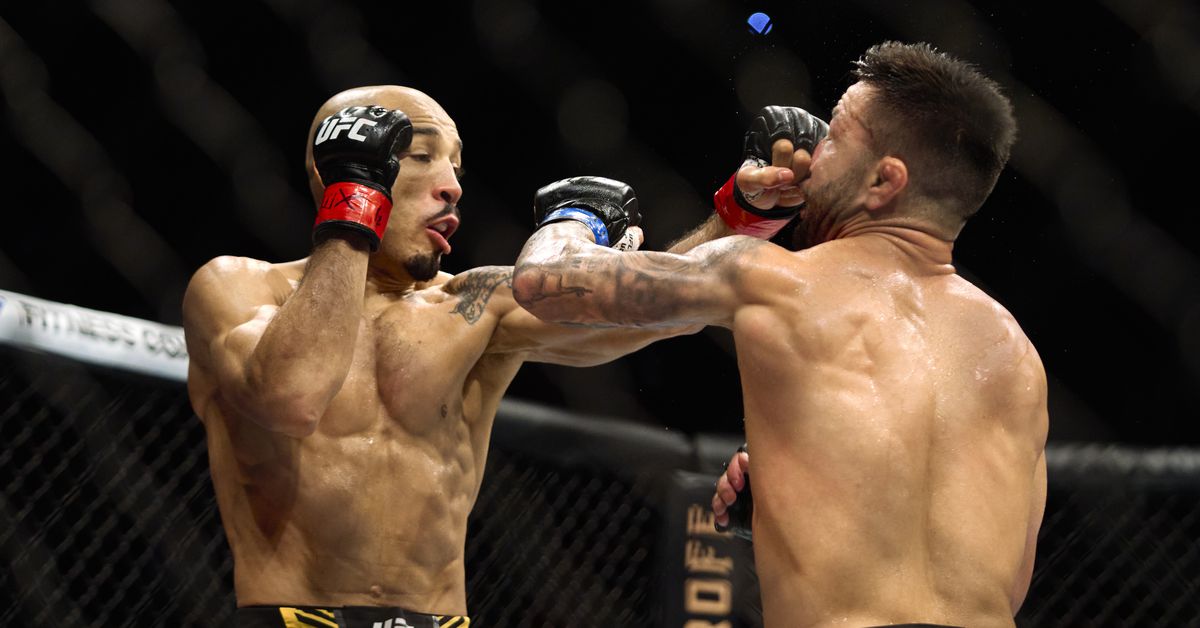 At UFC 265, Jose Aldo defied Father Time once more by putting on one hell of a performance against an extremely tough Pedro Munhoz, blanking “The Young Punisher” 30-27 on all three judges’ scorecards.

It was yet another reminder that Aldo isn’t going anywhere. In fact, he’s determined to win UFC gold in his new home at bantamweight. If he continues to improve like he did over his last few fights, he might indeed pull it off.

“I’ve been working a lot, I want to be a champion in this division and I’ve been dedicating myself a lot in Brazil and that’s why I’m here tonight,” he said to Daniel Cormier through an interpreter after his win. “I’m training a lot. I’m training harder, and you can be the next guys are going to see me a lot more aggressive.”

Much was made of Aldo’s improved boxing, especially his jab.

“My hands are going to get quicker and quicker as time goes on,” he declared at the UFC 265 post-fight press conference.

“After I lost a fight, I realized I needed to incorporate more things into my repertoire and that’s how I got into Navy-sponsored boxing in Brazil. I feel that’s made better my punches and obviously everything upper. But I’m never going to forget my kicks.”

As for what’s next for Jose Aldo, he’s looking for one more fight in 2021, hopefully against former champ T.J. Dillashaw.

“It would be great for me to fight with Dillashaw, hopefully by December,” he said. “I think it’d be a great fight and that’s what we expect. That’s what I’m expecting right now.”

It’s a big question mark right now whether the UFC and/or Dillashaw are interested in that matchup. T.J. just won a tough fight against Cory Sandhagen that resulted in a knee injury, so December might be a little early.

Plus, Dillashaw made it clear that he felt the win put him in the #1 contender seat. While that hasn’t been confirmed by any UFC brass, it’s about the hottest fight out there after Aljamain Sterling and Petr Yan sort out the 135 pound title picture.

Whatever the case, seeing Jose Aldo back in the cage before December sounds good no matter who the opponent is. So sign us up for that, please and thank you.