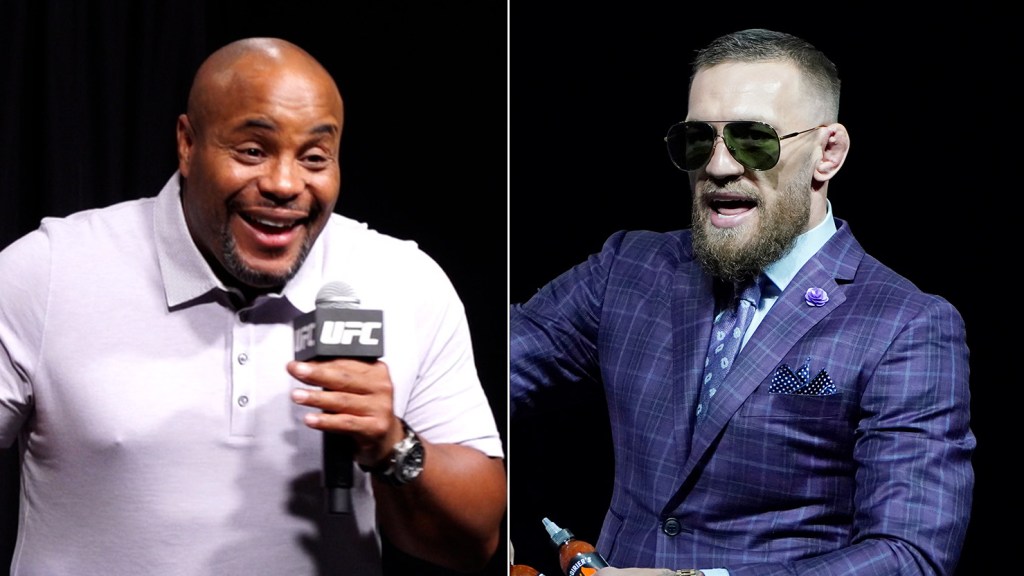 Conor McGregor is at it again on social media, this time targeting former UFC champ-champ Daniel Cormier in a series of now-deleted tweets.

Since his loss to Dustin Poirier at UFC 264, McGregor has taken to social media a number of times to attack various parties, including Khabib Nurmagomedov’s late father, Poirier and his family, and most recently, a back-and-forth with UFC commentator Daniel Cormier.

Cormier believed McGregor “crossed the line” in tweets recently directed at Nurmagomedov. “I think when stuff like that is being said, I think it’s a cry for help,” Cormier stated on his ESPN show “DC & RC.”

In response, McGregor posted a since-deleted tweet with a picture of Cormier in a suit during his commentary duties with the caption, “A cry for help if I’ve ever seen one.” 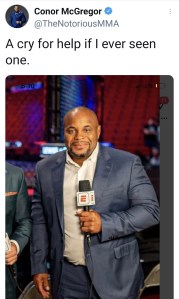 The back and forth has continued.

Daniel Cormier is a fat mess. Getting into worse condition by the day. God bless him. Showing up drunk at media events the very day before he was in the booth calling my fight. Drunk at a media event working? The day before being a commentator on the biggest fight in history?

@dc_mma Your back situations just mental too. Your weight and way of life is abysmal. And now drunk at work the day before you commentate a McGregor event? Pitiful. Congrats Jon on his head kick KO anniversary over you. Good always defeats evil? Wasn’t sure you were evil. Fakes.

McGregor is referring to Cormier’s media appearance following the UFC 264 weigh-ins, after drinking beer with Laura Sanko during the official UFC weigh-in show.

“I’m burping because Laura Sanko and I just freakin’ shotgunned beers in the back for the championship of our weigh-in show,” Cormier told the media in attendance after pulling the microphone away from his mouth to burp before responding to a question. “I’ve been feeling like I need to vomit for the last 30 minutes.”

If Cormier showed up to work inebriated, McGregor’s complaints would be a valid concern about his professionalism. However, that is not the case here. As a part of Cormier’s on-air duties during the weigh-in show, consumption of alcohol was one of the activities that took place.

In fact, his co-host of the weigh-in show also chimed in via Twitter on Cormier’s state, adding further context to the story after McGregor’s tweets:

I can assure everyone he wasn’t actually drunk. DC is a funny guy and he was having fun. He’s twice my size, we drank the same amount just as fast (well, almost lol) and I was fine. He was joking around. He’s a true professional on all levels. https://t.co/WXbVazrnN8

I can assure everyone he wasn’t actually drunk. DC is a funny guy and he was having fun. He’s twice my size, we drank the same amount just as fast (well, almost lol) and I was fine. He was joking around. He’s a true professional on all levels.

In addition, there also have been no reported concerns about Cormier’s sobriety while calling the fights the following evening during UFC 264.

It appears Cormier is ready to put this feud to rest, calling for McGregor to stop talking and focus on fighting in a deleted reply on Twitter:

@TheNotoriousMMA we can’t fight, it’s all just talk so stop! Thank your for watching! Get help. Win a fight

McGregor is still healing from injuries sustained at UFC 264, which included a broken tibia and fibula. His return to action has not yet been determined.

Photos: Daniel Cormier through the years