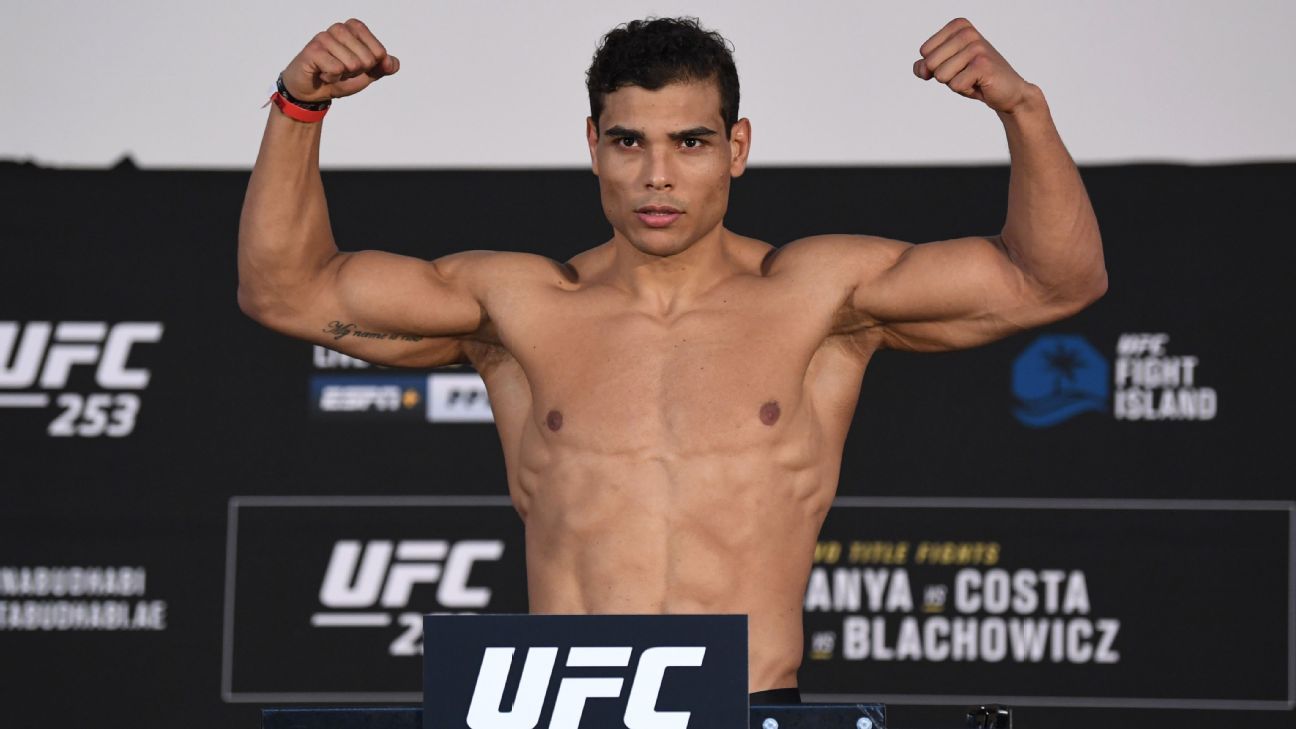 Brazilian middleweight Paulo Costa says he made a series of poor decisions the night before his first UFC title fight in September, which led to the worst performance of his MMA career.

Costa, 30, is scheduled to fight Marvin Vettori in the main event of UFC Fight Night on Oct. 23. It will mark his first appearance since he suffered the first setback of his career, a second-round knockout loss to Israel Adesanya at UFC 253 in Abu Dhabi.

In the aftermath of the loss, Costa said on his YouTube channel that he consumed a bottle of wine the night before the fight in an effort to fall asleep.

In an interview with ESPN on Thursday, Costa said his first mistake the night before the fight was to hold a hard training session. Costa, who cuts a lot of weight to compete in the middleweight division, said he normally does not train on weigh-in day — the day before the fight — but elected to do so because there was more recovery time in Abu Dhabi due to the time difference.

“My weight cut was very hard, but it’s always hard,” Costa told ESPN. “The problem is that in Abu Dhabi, the fight happens in the morning, not at night. So, you get one night more [of recovery]. And what happened is, after my weight cut, I had recovered very well. But then I trained so hard. I was so confident, that I trained hard. I trained more than is recommended after a weight cut. And I think this made a lot of problems in my body. I had a lot of cramps and I had a lot of problems trying to sleep.”

Costa (13-1) went on to say he took a supplement that contained ginger, which was supposed to help alleviate his cramps but made him feel more awake. He said it’s not unusual for him to consume small amounts of wine at night to fall asleep, and as the night dragged on and he still couldn’t sleep, he ultimately decided to use that as a last resort.

“I had decided to fight. I would not let this fight fall out,” Costa said. “After the physical therapist stepped out of my room, I went to my bed but couldn’t fall asleep. I tried melatonin, but it didn’t work. Sometimes I will use one cup of wine when I feel a lot of stress, it’s helped me a little bit, but just one cup, when I have time to put it out of my body. But it was too late. I was desperate to fall asleep.”

Costa said he’s not trying to make excuses for the loss, as he said it was still his decision to go on with the fight and he did so thinking he would win. He also said he doesn’t regret talking about the bottle of wine, even though some UFC athletes have mocked the revelation, including Adesanya.

Despite the loss, Costa remains the UFC’s No. 3-ranked middleweight. He believes a win over Vettori, who also came up short in a title bid against Adesanya in June, will earn him another championship bout.