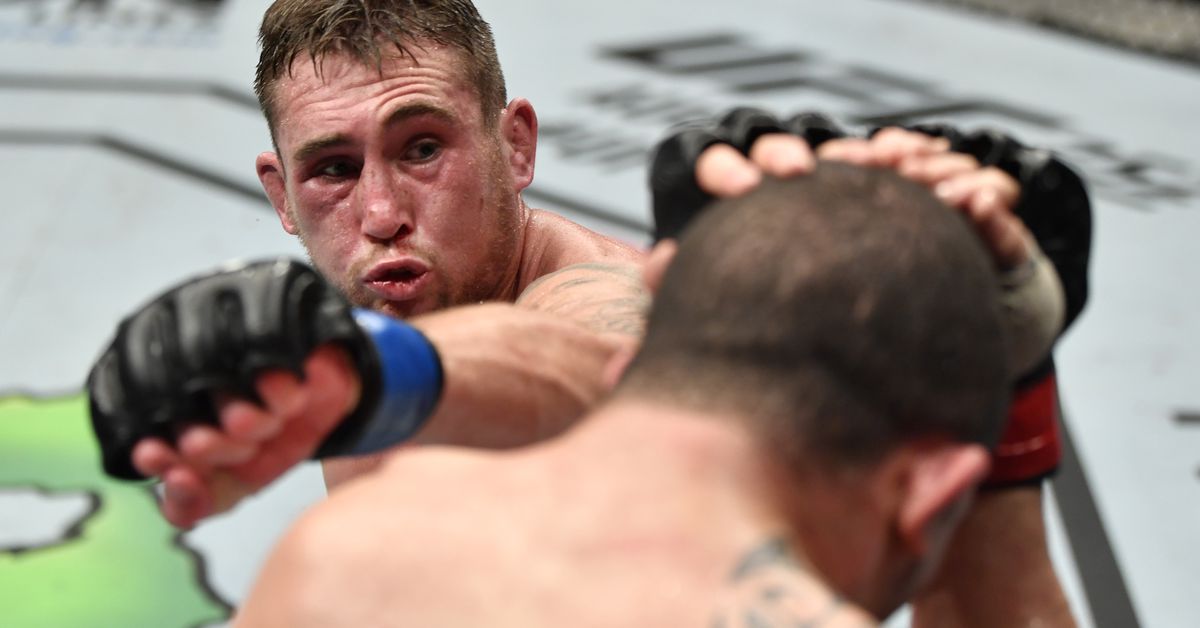 This past Saturday, UFC middleweight Darren Till was having a bad day when the little voice in back of his head told him to stop moping and get to the gym. No one was there, so he worked out alone, in darkness, shouting at himself in the mirror.

A broken collarbone has been the sole interruption to a fight camp that feels to Till like it’s stretched for one year, and the break he feels he might need afterward is shadowed by another one as he approaches a UFC Vegas 36 headliner opposite Derek Brunson.

Till, who is tied with Yoel Romero in the No. 10 spot of the MMA Fighting Global Rankings, is known for jokes and occasionally offensive memes, but his motivation hasn’t waned through the ups and downs of his recent career. Despite a 1-3 record capped by a loss to ex-champ Robert Whittaker and the broken bone that nixed his UFC Vegas 23 headliner against Marvin Vettori, the 28-year-old Brit’s goals haven’t changed.

“I have visualizations of winning that belt, [and] when Joe Rogan comes over to me with the mic, throwing the mic out of his hands and giving it to [my head coach] Colin [Heron] so he can give the speech that is needed. And I go out of the cage with my belt, let him have his speech, and I dump the belt on his desk the next day, and we continue.

“I visualize all this, mate, but I believe it. With all the antics, that’s hyping fights, but don’t get it twisted, I don’t take this lightly. … I wake up every day and I put my soul, mind and body through hell and back.”

Whittaker is expected to serve as the next challenger to champ Israel Adesanya’s title, though the pandemic could delay the fight until 2022. Till has a friendly rivalry with Adesanya and has a message for the champ.

Adesanya grinned when asked about Till’s message as the next guest on “The MMA Hour.”

“Ah, Darren, Darren, in case I didn’t know,” he joked. “We don’t talk all the time. We talk often. We’re cool. But he just has to win first. I’ve laid it out to him so many times, and he just keeps flopping. Like, Jesus Christ, get it to f*cking together, Darren. So he can’t talk unless he wins first, and to win the way I’ve been winning in this division is not an easy task. So pick a number and get in line, son.”

Adesanya believes Till will beat Brunson and move one step closer to the title shot. But before Till calls for one, his goal is to first finish Brunson in the first round and send a message to the world. The U.K. standout has confronted plenty of doubters on his road through the UFC’s welterweight and middleweight divisions and would love nothing more than to silence them.

“I know I’ve got the tools to beat Robert Whittaker, Israel Adesanya, Marvin Vettori, Paulo Costa, Derek Brunson, Uriah Hall, Sean Strickland, all these guys, I know it,” Till said. “There’s nothing in my mind now that says to me in that back, ‘No Till. No Till.’ Yeah, we all have doubts. Am I going to win this fight? But when I say those words, I don’t doubt myself in the minimal.

“Everyone gets doubted. And you don’t just get doubted. by the fans, you get doubted by people close to you. I love it so much. I just love looking in people’s faces who I know doubted me, and not saying anything, but just looking at them right through their soul.”

When Till does decide to hang up his gloves, he said, he will be a fighter who lives on forever as one of the greats in MMA. Whatever it takes to get him there, he’s willing to pay the price.

“Anyone else can say anything about me,” he said. “I don’t give a f*ck. I want one thing from this sport. I’ve sacrificed too much f*cking sh*t. I don’t want to be sitting there at 35, 40, no knees, no back, no shoulders, a few cells missing from the brain — f*ck that, mate. I’m getting involved in businesses, and I’m getting involved in the business of f*cking hating people and getting to where I want.”