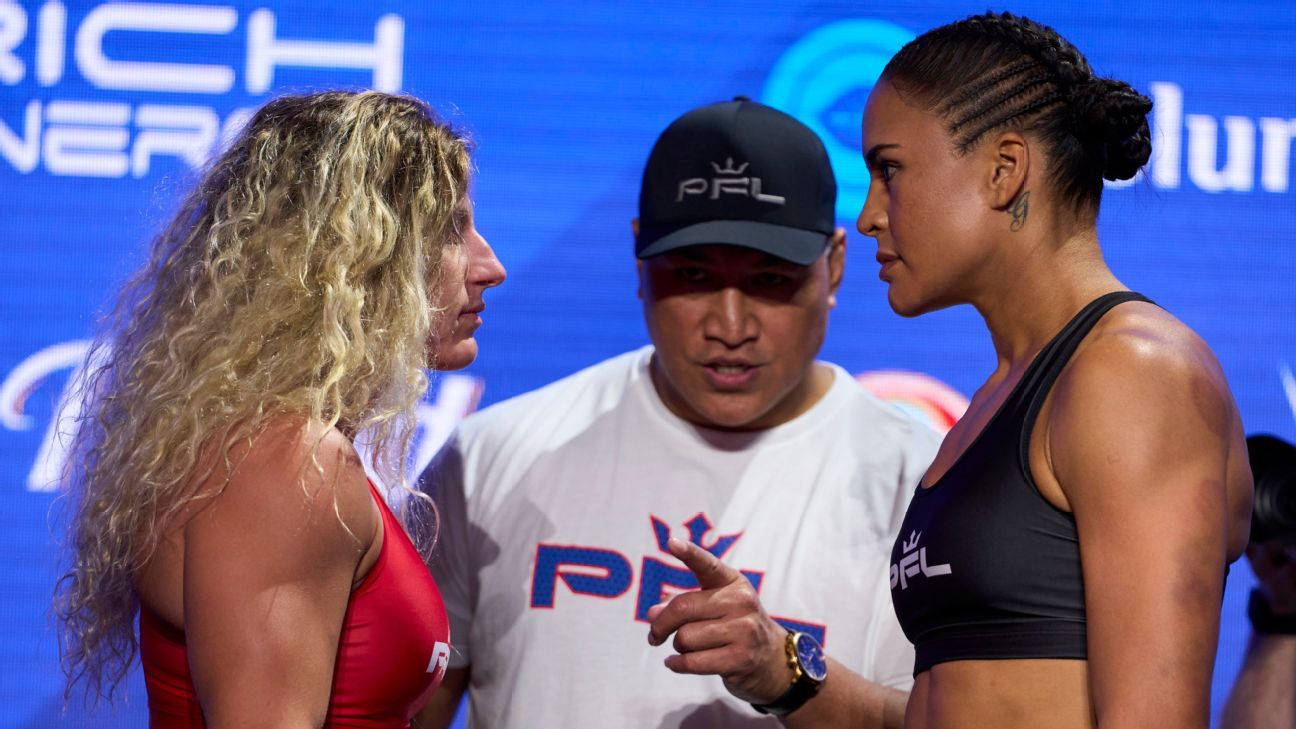 As the PFL playoffs continue with semifinals in two weight classes on Thursday in Hollywood, Florida (live on ESPN+; 9 p.m. ET on ESPN/ESPN+), the emerging narrative could be that a dominant champion remains in the driver’s seat. Or it could be that someone new is about to take the wheel. Or both.

Kayla Harrison, who rolled to the 2019 PFL women’s lightweight championship, headlines the fight card at Seminole Hard Rock Hotel & Casino, taking on kickboxer Genah Fabian in one semifinal. Harrison (10-0) is a heavy favorite in this bout, despite Fabian’s pedigree of training at City Kickboxing in New Zealand with two UFC champions, middleweight Israel Adesanya and featherweight Alexander Volkanovski.

Beyond this week’s fight, Harrison is the frontrunner for the $1 million championship — a position she’s even more firmly entrenched in after the withdrawal of No. 1 seed Larissa Pacheco, who missed weight on Wednesday. Her scheduled opponent, Taylor Guardado, now faces alternate Mariana Morais.

But while there’s a good chance the 2021 women’s lightweight champion will be the same as the 2019 champ, there’s guaranteed to be a new titlist at heavyweight, the other division that locks down its finalists on Thursday.

2019 PFL heavyweight champion, Ali Isaev, never made it to the cage this season to defend his title. That leaves four new names in the mix. Bruno Cappelozza, the No. 1 seed, takes on Jamelle Jones, and second-seeded Denis Goltsov faces Ante Delija.

Follow along for recaps and analysis throughout the night.

Leve, a two-time world champion in jiu-jitsu, clearly wanted to make a statement by showing off her standup skills in her pro MMA debut. She did not attempt a takedown in the first three minutes of the fight. But after Barber wobbled her with a straight right hand, then swarmed her with punches, Leve decided enough was enough.

Leve, who fights out of Philadelphia, went for the takedown and quickly turned it into a rear-naked choke, finishing Barber at 4:18. Barber, out of nearby Boca Raton, is 1-2 as a pro.

It was only fitting that the first winner in a night of fights in Hollywood, Florida, was a fighter from Florida nicknamed “Hollywood.” Lohsen used strong, fluid grappling to secure his fifth victory in his last six bouts, as all three judges scored the bout 29-28, 29-28, 29-28 at the end of three rounds.

The 26-year-old Lohsen had won six of his last eight by submission, and he did threaten Flok throughout with a variety of different submission attempts, but Flok, who fights out of Wisconsin, toughed it out to the final bell. Both lightweights were making their PFL debuts.