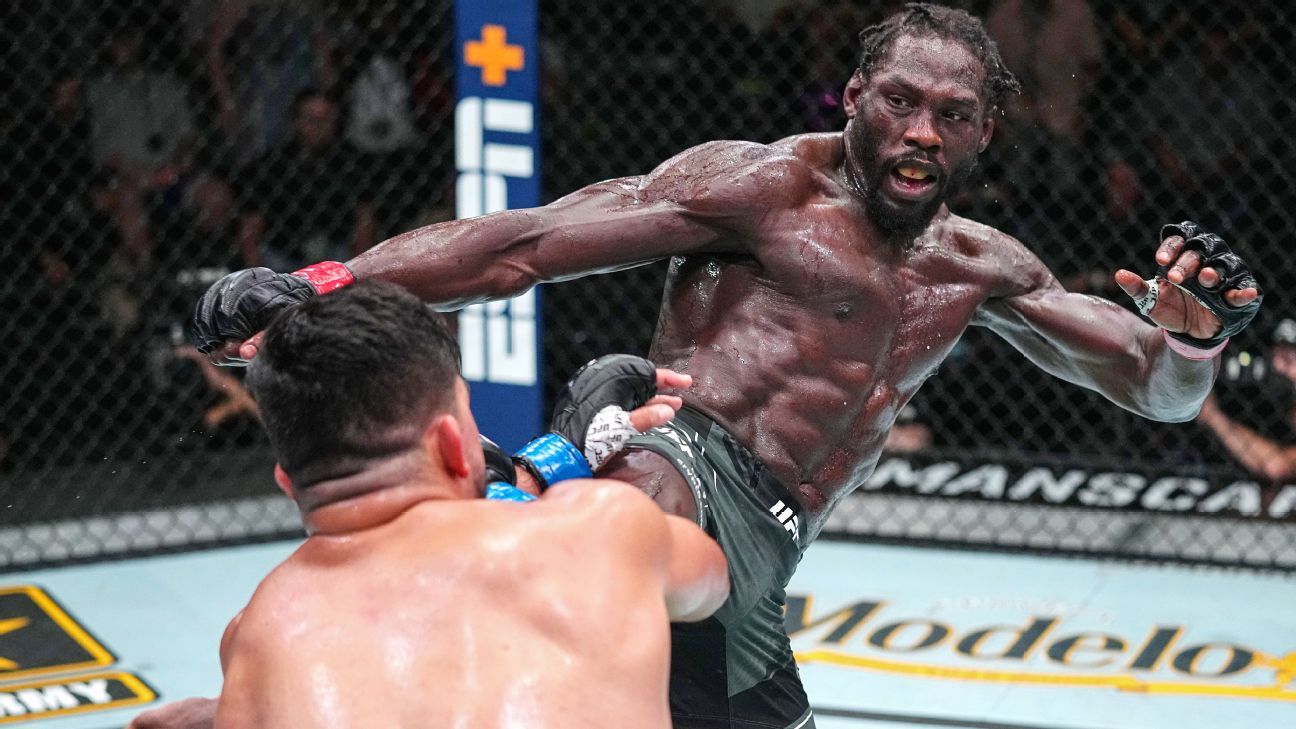 Jared Cannonier has been in the UFC for six years, competing in three different weight divisions. He’s closer to 40 years old than 30.

Yet, on Saturday night, the former Federal Aviation Administration (FAA) employee put forth perhaps his most impressive performance in the Octagon. Cannonier bested Kelvin Gastelum via unanimous decision (48-47, 48-47, 48-47) in a poised showing in the main event of UFC Fight Night in Las Vegas.

“It’s always glorious to go five rounds with a guy like Kelvin at that level,” Cannonier said in his postfight interview. “Winning is even more glorious, if you will. I’m happy.”

Cannonier made all the right adjustments after a close early portion of the fight, dropped Gastelum with a right hook in the third and then put a stamp on the outing in the late rounds. It was the first time Cannonier has ever won a five-round decision in his career and only his first winning decision since 2016.

Normally, the explosive Cannonier can end a fight with one punch or kick. But Saturday showed he (and his coach John Crouch of The MMA Lab) could outpoint a wily veteran like Gastelum.

ESPN has Cannonier ranked No. 5 in the world at middleweight. Gastelum, meanwhile, is the man who gave UFC middleweight champion Israel Adesanya his most difficult test yet at 185 pounds.

Afterward, Cannonier said he’d love to get the next shot at Adesanya, but he might have to fight again before a chance at the belt due to a light bank account. Adesanya is very likely to defend next against former champion Robert Whittaker.

“I’m broke, so I need to fight,” Cannonier said. “Hopefully I get that title shot. But the right name might make me say yes.”

Cannonier came out in the first round landing big combinations and calf kicks in a strong first round. Gastelum rallied in the second round and seemed to take momentum, landing hard 1-2 combinations out of the southpaw stance, including several with straight left hands that snapped Cannonier’s head back.

The third round was pivotal in the fight. Cannonier switched to southpaw and whipped a right hook that dropped Gastelum in the opening seconds of the round. Cannonier really never gave back control after that, even though Gastelum was able to pop right back up.

Cannonier again landed the harder shots in the fourth round before Gastelum mounted a mini comeback in the fifth with some solid combinations.

“I’m ambidextrous, so I could go both ways and I can fight very effectively out of both stances,” Cannonier said. … “After I dropped him, I was looking for [the right hook out of southpaw] like crazy, but I couldn’t find it again.”

Cannonier (14-4) would have earned a title shot with a win in his previous bout, but he fell to Whittaker via unanimous decision last October. The Texas native, who fights out of Arizona, was on a three-fight winning streak prior to that loss.

Cannonier, 37, is one of only two men (Conor McGregor being the other) to win via KO/TKO in three different UFC divisions. He started his UFC run at heavyweight after leaving a job doing maintenance on traffic control equipment for the FAA, weighing more than 300 pounds. He then moved to light heavyweight and now competes at a shredded 185 pounds.

“After a hard-fought win like that, hell yeah I want the title,” Cannonier said on the ESPN+ postfight show. “But it’s not up to me. It’s up to the matchmakers and the UFC brass. I just went out there and did the best I could to send a message.”

Gastelum (16-8, 1 NC) began his UFC career as a welterweight prospect after winning the Ultimate Fighter middleweight crown in 2013. The California native, who trained out of Arizona this camp with former UFC double champion Henry Cejudo, moved to middleweight after struggles on the scale in 2016 and emerged as a contender, facing Adesanya for the interim title in 2019.

It was a losing effort, but it was an all-action bout that was perhaps the best of that year. Gastelum, 29, has lost five of his past six fights, including that barnburner against Adesanya. His strength of schedule has been some of the best in any division.