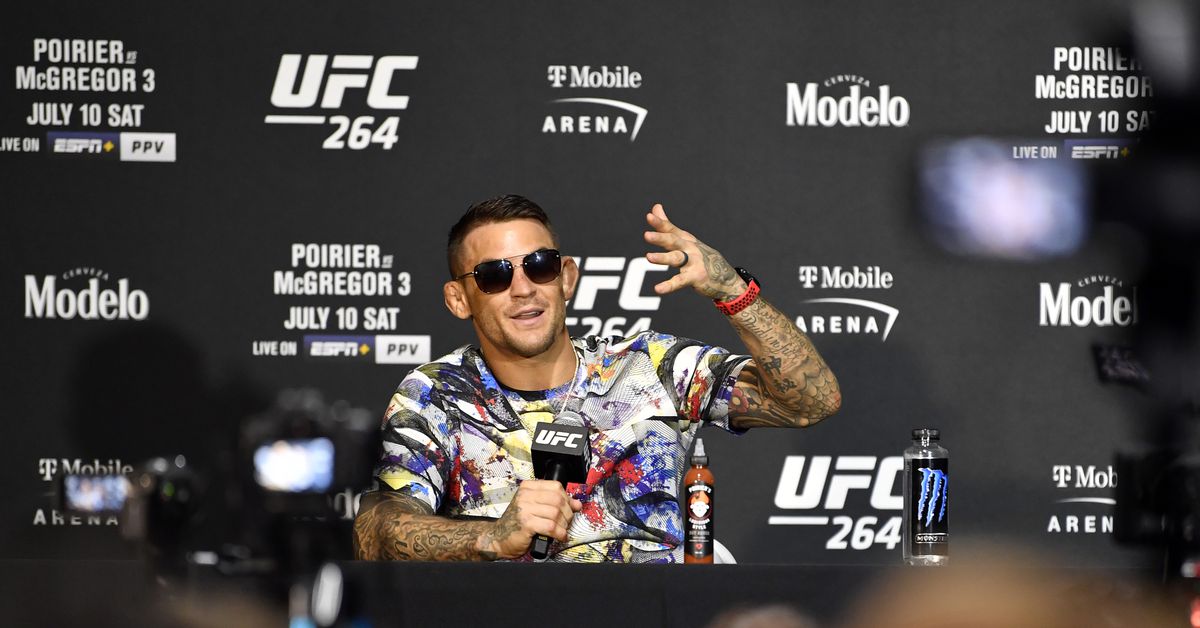 Dustin Poirier is too busy living his best life to be worried about the ongoing antics of Conor McGregor.

Last month, Poirier won his second straight fight over McGregor, scoring a first-round TKO when McGregor’s leg broke. Immediately afterwards, McGregor unleashed a bitter rant aimed at Poirier and his family and since then, “Notorious” hasn’t really stopped, periodically taking shots at Poirier over social media, including earlier this week. McGregor’s continued aggression has drawn criticism from several MMA luminaries but for Poirier, he says these are just the actions of a man going stir-crazy.

“It doesn’t really bother me, I don’t really care,” Poirier said during an ESPN+ Q&A hosted by Laura Sanko. “When I think about in hindsight, like today, I was thinking about it like, ‘The guy’s probably losing his mind.’ He can’t really train. He’s got a hurt leg that he’s trying to rehab. Rent free. I’m just living rent free.”

It’s likely made easier for Poirier to take such a magnanimous view of the situation seeing as he is now one-up on McGregor, securing a 2-1 lead in the rivalry. In turn, McGregor’s antics are clearly designed with the intention of getting one more shot at Poirier, but given his injury, that will have to wait. In the meantime, Poirier is moving onward and upwards as the presumptive next challenger for Charles Oliveira’s UFC lightweight title. Poirier, the number-one ranked lightweight in MMAFighting’s Global Rankings, opened as a solid betting favorite over Oliveira and the two are anticipated to face each other sometime later this year. And should he win the undisputed belt, Poirier says he would be interested in perhaps testing himself at welterweight.

“Of course I would,” Poirier said. “Those are some big guys, man. We’ll see. I definitely can fight at 170. Honestly, now at 155, my metabolism has caught up. When I was cutting to 145, between fights I would get a lot heavier than I do now. I think my body was getting messed up and holding on to a lot of weight. I would shoot up to 190 when I was fighting 145. Now I don’t get past 182. That’s really the max I walk around at. But I think I could fight at 170, too. There are some fun fights there.”

Pay. Jake Paul knows he’s in Dana White’s head over his fighter pay complaints: ‘I’m affecting his pockets and he doesn’t like that’.

Gold. Gable Steveson isn’t chasing an offer from the UFC: ‘I don’t run to people … Dana White, you have my number’.

Regret. Jacare Souza reflects on main ‘mistake’ during UFC run, ‘could have put my foot down’ and waited for title shot.

The UFC really working on that Marvel crossover.

The rise of Giga Chikadze.

Who wins the TUF middleweight tournament this weekend?