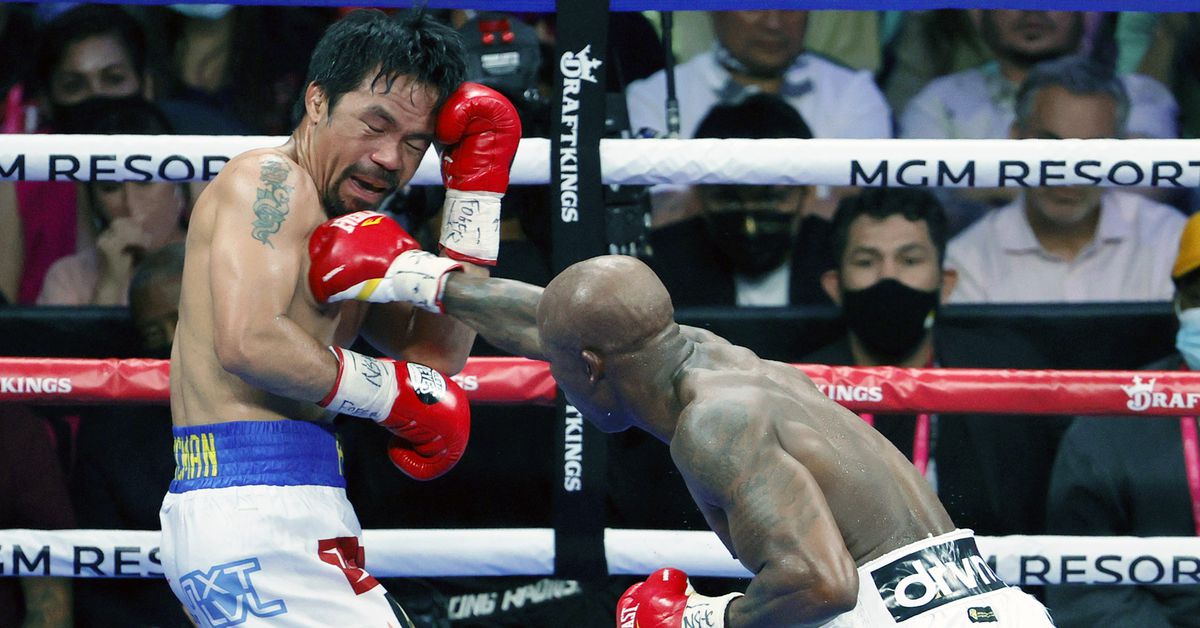 Manny Pacquiao is a pretty universally respected figure. Fighting from the depths of poverty to superstardom and lots of championship wins, Pacquiao has represented himself admirably for many years inside the ring. Hell, he might end up president in the Philippines someday!

However, Pacquiao isn’t exactly accepting his recent defeat to Yordenis Ugas with grace. Speaking with The Athletic, Pacquiao described Ugas as “one of the easiest opponents” of his career, blaming the loss on his legs failing him.

Manny Pacquiao: “In my entire career, Ugas was one of the easiest opponents. He only had one style, and I should’ve been able to easily move away… You’ve seen how I have moved in my fights before. I couldn’t move in this fight. My legs just – stopped.” [@TheAthleticBOX]

Always one to offer his two cents, former UFC champion Michael Bisping took to Twitter to take the boxing legend to task for his comment. “The Count” argues that accepting the defeat is the only way to move forward, as well as the manly path.

How about when fighters lose they man up, say fair play, the Better man won. Seems these days some are man enough to fight but not man enough to accept the result. Accept, assess, improve, do better. Denial is never the path forward. https://t.co/J1wa4hnk1X

“How about when fighters lose they man up, say fair play, the Better man won,” Bisping tweeted. “Seems these days some are man enough to fight but not man enough to accept the result. Accept, assess, improve, do better. Denial is never the path forward.”

If this is the end of Pacquiao’s professional boxing career, the 42 year old leaves the ring with a professional record of 62-8-2, and there are a dozen golden titles hanging in his closet. Bisping, meanwhile, retired in November 2017 and is currently a member of the UFC commentary team.

I would like to confirm that this drill is absolutely miserable. Typically, it’s done in a group of three, rotating the person shooting takedowns every 60 seconds or so for a few rotations. I cannot imagine doing it for 25 minutes!

Being able to laugh at yourself is essential in the fight game, where bad things will happen eventually.

I’m not a zoomer, but TikTok and its young creators provide objectively the best social media content.

Jake Paul is living up to his promise that their boxing match will the biggest of Tyron Woodley’s career.

Interest in Tyron Woodley has NEVER been as high as it is for his @JakePaul fight. These Google Trends date back to his UFC debut in 2013. The next highest peak was for his Darren Till fight in Sept. 2018, which the Paul fight has more than doubled #PaulWoodley pic.twitter.com/xZazECpD5y

All the best to longtime MMA vet (those who haven’t seen his pair of battles vs. Justin Gaethje are missing out) and Bare Knuckle champ Luis Palomino, who is struggling with a nasty bout of COVID-19.

Tired and rocked along the fence is just a bad place to be.

Left hook to the temple!

A cool perspective on crop harvesting:

Midnight Music: Okay, final album that came out last Friday! The great Sturgill Simpson returned with yet another album, The Ballad of Dood and Juanita. A blue grassy concept album about the Kentucky frontier, the record features Willie Nelson!