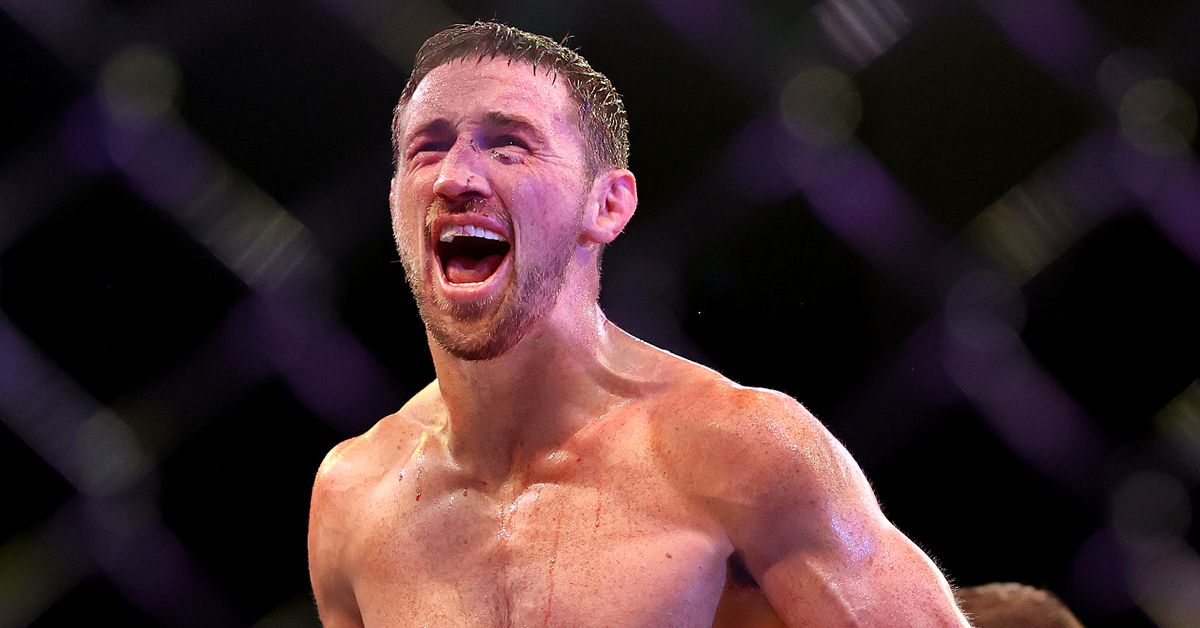 MMAmania.com will deliver LIVE coverage of the PFL 9 main card below, which begins at 8 p.m. ET on ESPN2. We’ll also provide quick results for the “Prelims” undercard on ESPN+, which starts streaming at 6:30 p.m. ET.

Round one: Khaybulaev catches a low kick for a takedown into guard. Short punches from Khaybulaev, Loughnane trying to do the same from his back. One minute in. Continuing to chip away. Two minutes in. Loughnane unable to make any attempt to stand as Khaybulaev continues to land. Two minutes to go.

Khaybulaev continuing to work. One minute to go. Loughnane scrambles up in the waning seconds, only to get slammed right back down. 10-9 Khaybulaev.

Round two: Jab from Loughnane, low kick exchange. Left hand lands for Loughnane, low kick soon after. One minute in. Counter right by Khaybulaev. He fakes a shot. Loughnane on the front foot two minutes in but seems reticent to let his hands go. Khaybulaev now advancing, eats a right hand and comes back to the body. He shoots and drags Loughnane to his seat against the fence. Two minutes to go.

Khaybulaev staying attached, trying to keep a hook in. One minute to go. Solid left hands from Khaybulaev, turning it up late. Now in half guard. 10-9 Khaybulaev.

Khaybulaev on top in full guard. One minute to go. Loughnane trying to stand against the fence. He makes it up, briefly gets dragged back down. 10-9 Khaybulaev.

Round one: After a wild charge out the gate, Jenkins takes Wade down against the fence. One minute in. Looking for the back, bit of an awkward angle. Jenkins re-shoots, has to fight out of a guillotine, then Wade looks for a double-leg in the scramble two minutes in. Jenkins defending well. Two minutes to go.

Jenkins still in a sprawl position. Wade manages to ultimately wriggle his way into north-south. Jenkins spins to his knees, avoids a back take, and shoots. One minute to go. Wade reverses with a really nice cradle to land on top. Short right hands from Wade. 10-9 Wade.

Round two: Low kick from Wade, straight lefts and jab from Jenkins. Wade tries a slow wheel kick as he slowly advances. Head kick attempt, low kick lands. Jenkins pops him with a jab and right hook. Jenkins shoots behind a 3-2 a minute in. Wade trying to defend with a kimura, then transitions to an anaconda choke attempt. He takes some time to adjust and it looks fairly deep. Jenkins manages to burst through into a shot, but gets caught in a power guillotine that makes him bail with two minutes to go.

Wade with one hook in against the fence. Good control from Wade. One minute to go. Wade doesn’t have the angle to get anything going but he stays on top until the bell. 10-9 Wade.

Round three: Sneaky hook kick lands for Wade. Jenkins punches his way into a rear waist lock. Looking for the back, awkward angle. Wade manages to slip out into top side control a minute in. North-south for a bit. Two minutes in. Jenkins trying to work his way up against the fence, does so. He grabs a front headlock, looks to spin to the back. One hook in, then two with two minutes to go.

Jenkins looks too high and Wade slips out the back door. Now Wade’s hunting the RNC, can’t get it but takes top position. One minute to go. Jenkins looks to lean into him and Wade looks for an arm-in guillotine, then poses for the crowd before the bell. 10-9 Wade.

Round one: Sordi trying to send out the jab. Glancing low kick. Right hand downstairs. Low kick from Carlos. Sharp counter right soon after. One minute in. Sordi takes a finger in the eye, doesn’t elect to take the time. Carlos counter left. Two minutes in. He shoots, denied. Sordi comes back with a right cross. Low kick exchange. Carlos punches his way into a double-leg attempt with two minutes to go.

Sordi fires a knee that strays low, pausing the action. They resume in the center. Good low-high 3-2 by the Argentinean. Long right cross behind it and he denies a level change. One minute to go. Counter right lands for Carlos as he’s backed to the fence. Sordi seemingly has the momentum. Another denied level change. They trade in the center. Carlos catches him with a counter left. 10-9 Sordi.

Round two: Low kick lands for Sordi. He answers a leg kick with a jab, then a level change with an uppercut that cuts Carlos. Another denied single-leg. Heavy return fire by Sordi as Carlos pushes for a takedown. Right cross from Sordi. Carlos counter right to answer a leg kick. Another counter right. Two minutes in. Same right hand a third time. Sordi still looking to jab. Low-high 3-2. Carlos low kick. Two minutes to go.

Carlos changes levels again, still can’t. One minute to go. Both try right hands. Carlos low kick, then a 2-3. He finally hits a takedown with around 20 seconds to go Sordi scrambles up, Carlos still attached. 10-9 Carlos.

Round three: Low kick lands for Carlos. Counter right. Sordi leg kick a minute in. Carlos tries a head kick, then shoots. He’s got the body lock. Sordi blatantly grabs the fence to stay up. Two minutes in. Slick little trip into a back take. Both hooks in for Carlos, playing backpack. Sordi shucks the hooks off, can’t dislodge Carlos. Nice escape by Sordi with two minutes to go.

Carlos shoots in for a single-leg. Sordi manages to deny and separate with a minute to go. Carlos tries a single-leg, then switches to a double, which he completes on the fence. Now takes the back. Sordi up, back down, back up, Carlos still attached. 10-9 Carlos.

Round one: They trade body kicks to start and Ferreira somehow hurts his opposite hamstring in the process. Nielsen follows him down with punches and there’s the finish in under 15 seconds.

For more on PFL and its ongoing playoffs, click here.