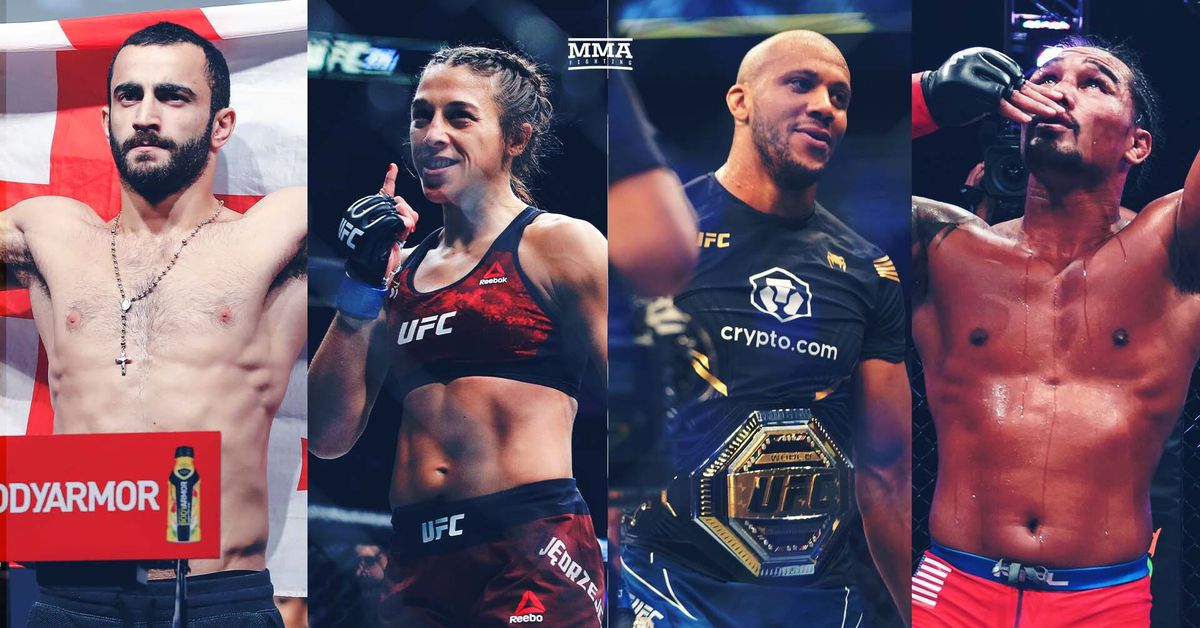 Welcome to the latest update to the MMA Fighting Global Rankings, where our esteemed panel of experts team up to sort out the movers and shakers of the ever-shifting MMA landscape.

Ladies and gentlemen, a monster month is ahead of us.

With 21 ranked fighters scheduled to compete over the next few weeks — including a whopping 13 at UFC 266 alone — September is slated to be the most impactful month yet in the brief history of this space. Considering all that’s at stake, the lists you read today could look completely different the next time you see them. But before we look ahead, let’s first reflect back at the month that was.

So how did August’s results affect the MMA Fighting Global Rankings?

A quick refresher on some ground rules:

In case you missed it, last month’s divisional rankings can be seen here.

And with that, let’s dive in.

Thoughts? Questions? Concerns? Make your voice heard in the comments below.

It may not look like much on paper, but Ciryl Gane made the most significant jump up the rankings in August.

Entering the month tied with Curtis Blaydes for fourth in our rankings, Gane dominated Derrick Lewis en route to a third-round finish that earned him an interim UFC title. The ease with which Gane ran through Lewis — not to mention the other notable scalps the Frenchman collected in the 7-0 start to his UFC career — has not only made him a trendy favorite to beat Francis Ngannou in a unification bout, it has also placed him in the top tier of the heavyweight division alongside Ngannou and two-time champion Stipe Miocic.

In fact, one panelist went as far as to rank Gane second only to Ngannou (all other second-place votes went to Miocic). Regardless of his exact spot in the top 3, to be placed in the upper echelon with two of MMA’s most dominant heavyweights is yet another stunning accomplishment for a fighter who began his pro career in 2018.

There was no movement to speak of at light heavyweight — and that will remain the case until next month when Glover Teixiera gets a long-awaited second crack at a UFC championship, which is currently held by Jan Blachowicz.

Blachowicz landed himself a big money fight against middleweight champion Israel Adesanya for his first title defense, but will a more seasoned 205er like Teixeira prove to be an even greater challenge? Fair or not, Blachowicz is still looking to build his own legacy in a division that has yet to emerge from the long shadow of Jon Jones. Should Blachowicz defeat Teixeira in definitive fashion, he has a fresh line of challengers ahead, which bodes well for fans eager to move on from the “Bones” era.

Gegard Mousasi and Jared Cannonier held serve in their respective headlining bouts with little difficulty, which means the most notable movement at middleweight may have been a major name dropping out of the rankings due to inactivity.

With multiple-time title challenger Yoel Romero passing the 18-month mark without a fight, he was officially removed from the MMA Fighting Global Rankings. The good news for “Soldier of God?” He has a high-profile bout with former Bellator light heavyweight champion Phil Davis coming up in two weeks and a win gets Romero right back into the top-15 of another division.

With a convincing win over Rory MacDonald, Ray Cooper III continues to show that the upper echelon of the welterweight division isn’t out of his — *ahem* — league.

That’s right, we have PFL representation in the top-15 this month as Cooper III enters at lucky No. 13. Cooper III has been one of the best kept secrets at 170 pounds for the past few years as he’s gone 10-2-1 since joining the PFL in 2018, winning a league championship in his second year, and becoming a legitimate homegrown star. It’s no longer a question of whether Cooper III deserves to be ranked, now we have to ask if he deserves to be ranked higher.

Similar consideration could be given to Vicente Luque, “The Silent Assassin,” who has won 10 of his past 11 fights in the stacked UFC welterweight division while reeling off highlight after highlight. His latest victim was Michael Chiesa, who was previously unbeaten as a welterweight, and that victory has propelled Luque into the No. 6 spot (tied with undefeated Bellator champion Yaroslav Amosov).

Were he the more verbose type, Luque might already have earned a title opportunity, but as it stands he’s made an undeniable case that he’s worthy of a big-name opponent next and possibly a top-5 spot himself. Could a Nate Diaz fight be looming?

Though we didn’t see any major changes in the typically busy lightweight division, longtime contender Kevin Lee has officially been removed from consideration for our 155-pound ranks as it appears that he could be moving up in weight permanently. That statement could be made with more confidence had Lee managed to defeat Daniel Rodriguez at UFC Vegas 35, but after suffering his fourth loss in his past five appearances, it appears that Lee is due for some much-needed soul searching.

As for the top of the division, it remains stagnant as UFC champion Charles Oliveira tries to find someone, anyone, to challenge him for his recently won title, with MMA Fighting’s No. 1-ranked Dustin Poirier not exactly begging for the opportunity.

Should Chikadze get his wish and knock Holloway out of the picture, there will be no denying that he should be next to face the winner of the upcoming UFC 266 main event between featherweight champion Alexander Volkanovski and Brian Ortega.

Jose Aldo may not have actually moved up in position month, but a vintage performance against Pedro Munhoz has assured his fans that he’s still a threat to anyone at 135 pounds.

The two-time featherweight champion’s bantamweight run got off to a rocky start after he lost a contentious split decision to Marlon Moraes then fell in the fifth round to Petr Yan in a vacant UFC championship bout. However, he’s since rebounded with two straight wins against Munhoz and another longtime contender, Marlon Vera. While many would love to see Aldo in a dream match against Dominick Cruz, he’s proven that he’s not far removed from the top-5 of the division.

In other important news, the rematch between Aljamain Sterling and Petr Yan has officially been set for UFC 267 on Oct. 30, so we may finally have our tie for the No. 1 spot broken without controversy. Fingers crossed.

Alexandre Pantoja defeated Brandon Royval to move up a spot in our rankings and set up a third fight with a man he’s already beaten twice, UFC flyweight champion Brandon Moreno.

A case could be made for Moreno to face Askar Askarov instead, given that Askarov holds a recent win over Pantoja, but given that Askarov missed weight for his most recent fight and the history between Moreno and Pantoja, one has to think that Pantoja has a good chance to be Moreno’s first title defense.

Former RIZIN champion Manel Kape finally earned his first UFC win and he did so in spectacular fashion, drilling Ode Osbourne with a flying knee in the first round. However, Kape missed weight by three pounds for the fight, which may have dampened some of the enthusiasm surrounding his performance.

As has become commonplace with Amanda Nunes holding serve over two divisions, there was little to speak of when it comes to happenings at 135 pounds. Nunes still reigns supreme, despite one rogue panelist among our ranks continuing to take umbrage with her lack of recent defenses in this division.

That will soon be a moot point as Nunes’ title defense against Julianna Pena, originally scheduled for UFC 265 in August, will now take place at UFC 269 in December. It’s a long wait and anything could happen in the next three months, but for now let’s hope that any controversy about Nunes being best bantamweight is put to rest before the year is up.

Yes, Valentina Shevchenko is still champion. And no, that likely won’t change anytime soon. But she has a worthy challenger coming up this month at UFC 266 and the division could see plenty of moving and shaking at that event.

Shevchenko takes on Lauren Murphy to close out the month, and while few are giving Murphy a chance to dethrone “Bullet,” she’s as tough as they come and at the very least Shevchenko gets another opponent that will allow her to show off her elite problem-solving skills.

No. 2-ranked Jessica Andrade will also be in action as she fights No. 9 Cynthia Calvillo, and pioneer Roxanne Modafferi looks to hold onto her No. 15 spot when she faces 17-1 Taila Santos.

Believe it or not, it has been 18 months since Jedrzejczyk’s epic encounter with Zhang Weili. There have been plenty of calls for the two to rematch or for “Joanna Champion” to be brought in as a test for an up-and-comer like Mackenzie Dern or Marina Rodriguez. Dern and Rodriguez have instead been matched up with one another for an October date, but there hasn’t even been a hint of a comeback fight for the former strawweight queen.

With Zhang now set to rematch champion Rose Namajunas in November, it becomes even more unclear as to when we might see Jedrzejczyk step into the octagon again.