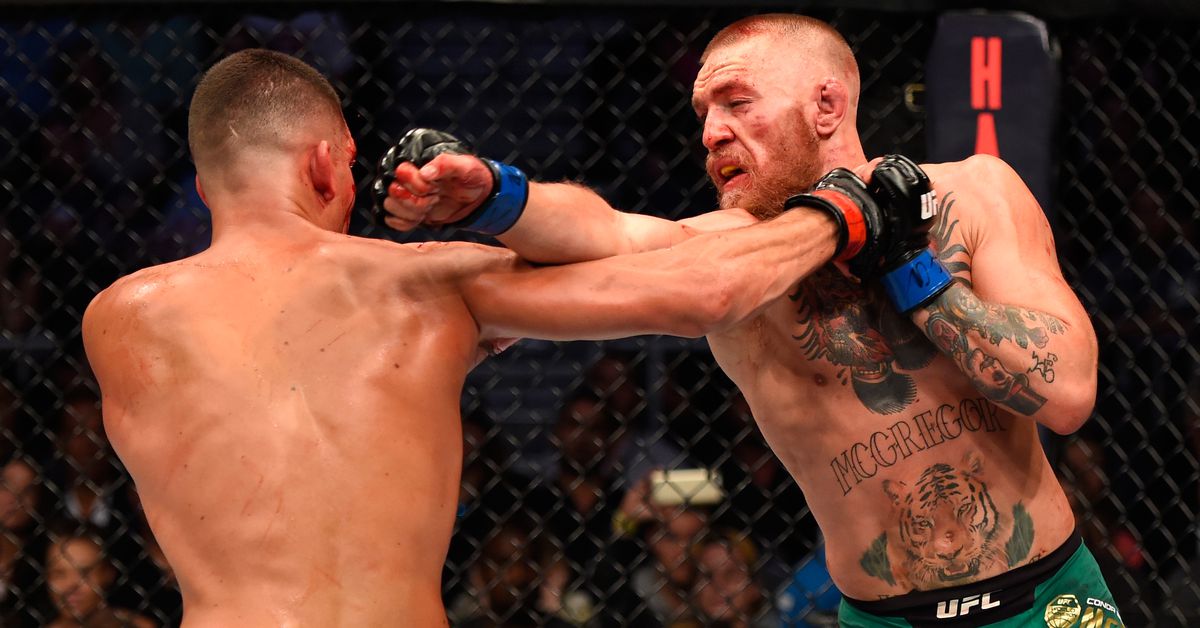 Nate Diaz vs. Conor McGregor 3 is going to happen. It probably doesn’t matter all that much if it happens in six months or six years — the trilogy is unsettled, and those two can disappear for years at a time without losing their loyal followings. Oh, and the occasional social media beef goes a long way in keeping people interested.

Tonight’s is a doozy. Typically, an exchange between the two online is a few short characters, a quick shot across the bow that the other is a loser. This time, however, McGregor and Diaz engaged in a lengthy debate, the majority of which can be read below (organized as chronologically as possible given the scattered nature of their Tweets and replies).

Who can’t? Come thru and see you little skinny fool you be smacked up and rolled up you bum. Calis mine.

This exchange lead to a direct debate between the rivals.

He fled the cage and I boxed his whole family around. And nobody finished me mate. I broke MY leg. No one or nothing else done anything to me. And anyway. Don’t worry bout them. I’m here in Cali months doing what I want. It’s 3 on the street now mate fuck your little sport.

I’m on a hair trigger mate. You stay where you are in hiding if you know what’s good for you bro. God bless ya kid have a good day

After this exchange, the two broke apart to subtweet the other, choosing to essentially give uninterrupted slide shows about their respective dominance over one another. Let’s first look to Stockton’s native son:

That means I’m the double triple champ of this whole shit fuck all you pussies ..

I’ll fight you in 4 years when your healed up

Naturally, McGregor did not keep quiet — here’s his presentation:

In the midst of all the chaos, Dustin Poirier caught a stray shot. Far strange, however, is that Diaz maybe accepted the callout from Vicente Luque? Diaz’s train of thought is rarely the easiest to follow, but he seems down to fight the streaking finisher.

A bit over one week into awkwardly plugging myself, and I’d like to send a major thanks to the 54 (at this time of writing) people who have supported the cause. Glad to have you on the team, and there’s still room on board!

UFC 269 may end up with a trio of title fights if this bout goes through and the rumor mill about Charles Oliveira vs. Dustin Poirier is correct …

To follow up on last week’s story about Khabib and ring girls, lots of people are poking fun at the former Lightweight kingpin.

Shoutout to Laura Sanko for breaking ground on “Contenders Series!”

The most powerful name in MMA returns at Bellator’s Moscow event.

I’m not shocked to see Darren Stewart go after his loss to Dustin Jacoby, but I always enjoyed his fights. If the judges go his way in ultra close bouts vs. Kevin Holland or Edmen Shahbazyan, perhaps things would be different! MMA crazy.

Darren Stewart has been removed from the UFC rankings pool.

Who’s pumped for the return of “Contenders Series?”

Dustin Akbari’s style of BJJ is both athletic and slick:

Who is making these videos? Seriously, I would love to post the original. MMA related, but decidedly random!

Midnight Music: Glen Campbell’s cover of “Southern Nights” hit No. 1 on the charts and is a classic piece of ‘70s pop, but Allen Toussaint’s original recording is wildly different and quite interesting.