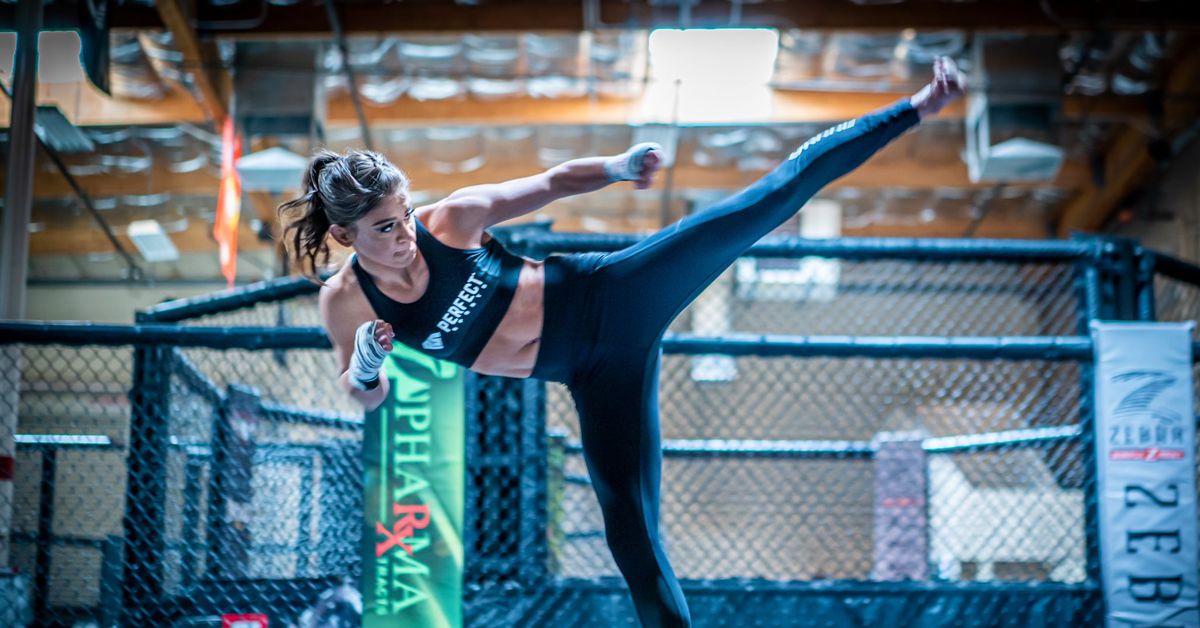 Alyse Anderson will never forget the road she traveled to get to her ONE Championship debut on Friday.

The 26-year-old former Invicta FC fighter has endured a lot of personal and professional turmoil to finally get her opportunity to compete amongst the best athletes in her division. To document that, Anderson posted an emotional video on her Instagram just recently documenting what the past year has been like for her including the devastating loss of both of her grandparents.

Nine months ago, Anderson was also working as an emergency medical technician in a Michigan hospital being flooded with COVID-19 cases as the pandemic continued to wreak havoc across the United States. Because healthcare workers were under such dire need, Anderson essentially had to put her fighting career on hold to focus on her job at the hospital.

That all changed when she got a call from her manager with an invitation to join the upcoming ONE Atomweight World Grand Prix, which will crown a tournament champion and determine the next contender in line to face reigning atomweight titleholder Angela Lee.

“My manager Brian Butler came to me around January or February about signing with ONE and I just told him, we’re so stressed in the hospital right now I can’t request a normal leave of absence like I normally do to take time off right now,” Anderson explained when speaking to MMA Fighting. “So we didn’t take the deal in January or February and then the Grand Prix came up and I was like I’d really have to be training full time in order to do this. These are really tough girls, these are really tough fights and I want to be fully prepared and the best version of me.

“So he got a good deal and monthly sponsors to make it work within like 10 weeks from when the fight was supposed to be. So within 10 days, I quit my job, found an apartment in Florida, packed my car up, drove across the U.S. to Florida and just started camp right away.”

On top of the monthly sponsors, Anderson inked the biggest deal of her young career to join the roster at ONE Championship, which allowed her to become a full-time fighter for the first time.

“I quit [my job] like one week before it was five years,” Anderson revealed. “It was mostly just exciting, especially after working the COVID unit and how awful the hospital was and the layoff of not being able to train as much as I wanted or not being able to fight because the short staffing and needing to be there at work. Honestly, I was just excited that I finally get to do my dream and be a full-time fighter.”

The addition of Anderson to the roster helped complete the eight woman Grand Prix tournament that will kick off at ONE: Empower on Friday, which is actually the company’s first ever all-female card in history.

It was an important step for the Asian-based promotion, especially considering how ONE has long championed women’s mixed martial arts while also adding numerous divisions across kickboxing and muay Thai as well.

ONE CEO Chatri Sityodtong didn’t hesitate for a second to bet big on the women in the company to carry an entire card and he was particularly excited to kick off the Atomweight Grand Prix.

“We scoured the globe for the very best atomweights in the world to create this World Grand Prix,” Sityodtong told MMA Fighting. “This ONE: Empower card coming up on Sept. 3 is genuinely the greatest female card in the history of mixed martial arts in terms of level of talent. Even the main event, our ONE strawweight champion Xiong Jingnan defending her title against eight time Brazilian jiu-jitsu world champion Michelle Nicolini and then the atomweight Grand Prix, we have phenomenal athletes from the states, from Ukraine, from across Asia and from Brazil.

“It took a long time to assemble what I would call the fantastic eight. I’m just so fired up. We really have an incredible line up and whoever wins the Grand Prix will face Angela Lee.”

There was a time when women’s mixed martial arts was considered an outlier in the sport but the days when UFC President Dana White promised that there would never be a female fight in his octagon are long since dead and buried.

In recent years, women have headlined some of the biggest events in the history of the sport.

Add to that, while the battle for equality in pay and treatment for women continues in most sports across the globe, mixed martial arts has actually become one of the only true level playing fields regardless of gender.

Still because it takes time to develop talent and grow overall interest, some divisions have struggled to gain wider acclaim in many of the bigger promotions. Atomweight is a perfect example of that where Invicta FC remains the only major North American promotion to feature the division prominently.

That ended up benefiting ONE Championship because the organization was able to draw in talent from within their own pool of fighters while also signing several more who could then participate in this upcoming Grand Prix.

When it comes to 22-year-old atomweight Grand Prix hopeful Itsuki Hirata, she’s almost been built for this tournament since the day she joined the ONE Championship roster.

The Japanese fighter actually started her professional career with ONE Championship after she was signed without a single bout on her resume. The investment has paid off because Hirata has quickly wrapped up four wins in a row but joining the upcoming Grand Prix tournament will be a huge step up in competition for her.

She’s not oblivious to that fact but she’s also taking full advantage of the opportunity that’s been presented to her.

“I don’t necessarily feel pressure at all,” Hirata said when speaking to MMA Fighting. “I am cognizant that I am the youngest [in the Grand Prix] but it doesn’t really bother me. I feel like there’s more to prove if anything.”

While her 4-0 record isn’t nearly as deep when compared to the resume for some other fighters in the field, Hirata has definitely embraced the attention she’s received since making her debut. A former Olympic hopeful in judo, Hirata first came to fame in her home country after competing on a reality show and then parlaying that into a huge following on social media, which also taught her the value of adding a touch of entertainment to her performances.

“The most important thing is the fight,” Hirata stressed. “The fight is a performance. If I’m able to do that and pull that off then it adds to everything else.

“Being able to fight at a large stadium really brings me motivation and my opponent coming from the U.S., I’m sure she has a lot of U.S. fans and that motivates me to get my name out there and get their attention as well. Everything all together, I’m definitely having fun with it.”

Despite a slight edge in total fights over Hirata, who will be her first-round opponent on Friday, Anderson feels a bit of that same expectations being heaped onto her shoulders as the only American in the field.

Of course, Anderson is also embracing the chance to join an elite group of atomweight fighters while hopefully expanding her own fan base beyond the United States.

“It’s definitely a step up in competition from Invicta but I’m just honored to be a part of it, especially being the only one in the Grand Prix to represent the U.S.A.” Anderson said. “It’s a little bit of pressure going to such an international stage and this will be the furthest trip that I’ve ever taken and it’s during a pandemic but this is honestly I feel like for my weight class and where I’m at, this is me being a top level of where I can be in my career.

“I definitely feel like I’m underrated, not fighting for ONE at all, so a lot of their fan base doesn’t know me. I’m excited to come in and put a statement and make my name known in ONE. I do think I’m being overlooked and I understand why but that just fuels me to put on a good show and win over the fans in that way.”

The end goal for Anderson, Hirata and the other six fighters will be eventually earning the shot against Lee, who has been a dominant champion ever since she claimed the title in ONE.

Sityodtong is confident that his team built the best possible tournament for a lone atomweight to stand out ahead of the crowd with Lee keeping a close eye on the field for her future opponent.

“[Angela Lee] obviously gave birth and is now playing mom and she’s really enjoying it,” Sityodtong said about the atomweight champion. “She’s got to get her body back in shape but her hunger, her fire is at an all time high. I think she has something to prove to her daughter and she wants to prove to the world that women can be super moms.

“[These] eight women are genuinely the best pound-for-pound atomweights in the world. These are just phenomenal athletes and martial artists. Angela has a very, very tough challenge ahead.”