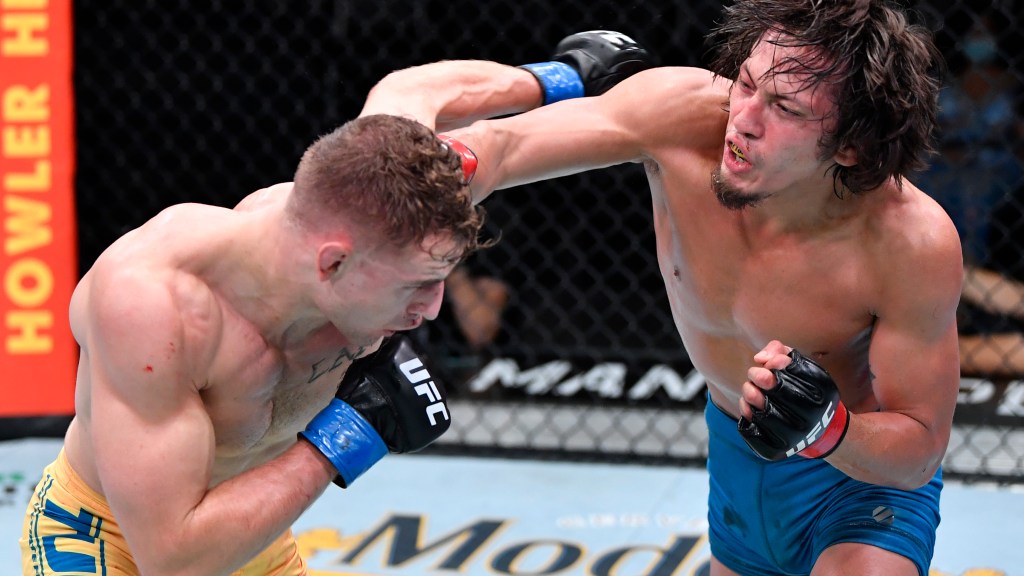 With another action-packed month of MMA in the books, MMA Junkie looks at the best fights from August 2021: Here are the five nominees, listed in chronological order, and winner of MMA Junkie’s “Fight of the Month” award for August.

Fiziev earned a unanimous decision win over Green in a “Fight of the Night” matchup. Both men had their moments, and despite Green landing nearly 40 more significant strikes, it was Fiziev who had the more impactful blows and got the nod on the scorecards.

Jose Aldo (30-7 MMA, 12-6 UFC) reminded fans once again he still has plenty to give inside the octagon with a high-profile win over fellow bantamweight contender Pedro Munhoz (19-6 MMA, 9-6 UFC).

Aldo put on a defensive and counter-striking clinic over the course of three rounds to win a unanimous decision over Munhoz with a trio of 30-27 scores, moving the former longtime UFC featherweight champ to 3-1 since dropping to 135 pounds.

The pair of finalists gave everything they had over three rounds, with Turcios winning by split decision in the end. He and Hiestand pushed each other to the limit in the striking and grappling departments, but only one side could get his hand raised at the final horn.

Leaving it all out there! EPIC round 1 in the books!

Chikadze further proved his legitimacy as a featherweight contender to watch when he beat longtime veteran Barboza by third-round TKO. Both men had their moments in the contest, but Chikadze had more pop on his shots and dropped Barboza twice before the fight was waved off.

The winner: Turcios vs. Hiestand

Turcios and Hiestand left it all in the cage.

The two bantamweight fighters engaged in a non-stop war for 15 minutes in the finale of the 135-pound tournament of “The Ultimate Fighter 29.” Turcios outpointed Hiestand in a split decision that read 29-28, 28-29 and 29-28.

With the win, Turcios became a TUF champion and was awarded a UFC contract. He was also received his jiu-jitsu black belt from his coach following the win.

A message from your Ultimate Fighter Season 29 Winner @RickyHadouken 🗣 pic.twitter.com/NLECQ4Fwz3

In the first round, Hiestand closed the distance early and took down Turcios. Hiestand maintained top control, but Turcios doing most of the attacking, as he was constantly landing strikes from the bottom. At one point in the middle of the round, Turcios got the back but lost it not long after. The fight got back on the feet in the last 30 seconds with both fighters brawling it out.

The second round also had a similar story. Hiestand pressured and looked to control the action on the ground, while Turcios stayed busy with strikes from bottom. Turcios pushed more, scrambled and attempted several submissions but was unsuccessful, not achieving a tap and ending in bottom position in most scrambles.

With two very competitive rounds in the books, both fighters came out to make a statement.

Turcios dropped Hiestand with a big, straight right hand, but was immediately taken down in the opening of the round. Once again, Turcios was doing most of the damage. Halfway through the round, Turcios began to be the dominant force in the grappling – something not seen in the first two rounds. The fight ended on the feet with both fighters slugging it out and Turcios getting the better of the shots.

With the win, Turcios is now 3-1 in his past four bouts. His lone loss came to UFC fighter Mana Martinez, who also fought on the same card, defeating veteran Guido Cannetti. Turcios fights out of Gracie Barra The Woodlands and Team Alpha Male.