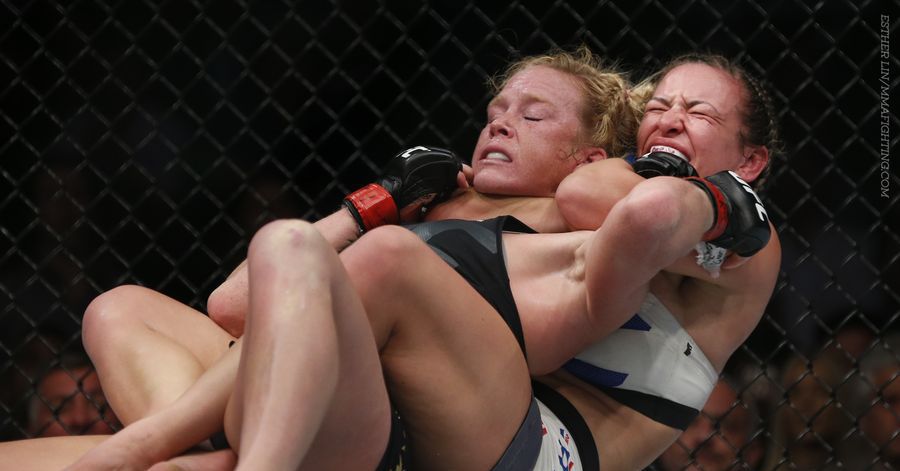 More than five years have passed since Miesha Tate snatched the women’s bantamweight title away from Holly Holm at UFC 196, and still her last-minute heroics remain an iconic moment in mixed martial arts history. Tate was just 90 seconds away from failing in her championship bid before forcing Holm to sleep with a Hail Mary rear-naked choke in one of the most dramatic come-from-behind finishes ever seen in the UFC octagon.

Tate and Holm never fought each other again, so it was only natural that fans began calling for a rematch a half-decade in the making following Tate’s successful UFC return over Marion Reneau in July. But that rematch will have to wait. For now, Tate’s next assignment is tentatively scheduled to come against veteran contender Ketlen Vieira in the main event of the UFC Fight Night card on Oct. 16. The matchup has yet to be made official, but Tate says it wasn’t an accident that her rematch with Holm was put on the back burner.

“It wasn’t Holly for the reason that I feel like that’s like a golden egg fight,” Tate explained recently on The MMA Hour. “That’s like a fight that we could do at any time, any point, it’ll never die. It’s like Diaz-Conor 3 — it’s like it’s always kind of available and there. So I wanted my next fight to be a proper climb in the rankings. I don’t want to come in and insult the division. I don’t want to come in and say, ‘Oh, I should be fighting a top-1 or top-2 [bantamweight],’ and Holly, she’s ranked No. 2.

“Personally, I wanted the winner of Ketlen Vieira and Sara McMann [at UFC Vegas 35]. But with Sara getting injured and [dropping] out of that, obviously Ketlen is left without [an opponent]. Holly has a fight already, and I think everyone else is either injured, fighting, or just had a baby. So honestly it’s kind of a crazy time in the division right now, but Kelten sounds like a very fine opponent, somebody I haven’t gotten to fight yet, kind of fresh blood in the UFC, and I’m excited for that potential matchup.”

Tate is currently the No. 11-ranked woman bantamweight in the MMA Fighting Global Rankings, while Vieira is sitting inside the division’s top 10 at No. 8.

Nonetheless, Tate remains one of the most popular female names in UFC history and owns a résumé that dwarfs many of her contemporaries. She fought on several of the most successful pay-per-views the UFC has ever put on and carries wins over multiple women who remain contenders in the division’s current era. So considering the dearth of compelling challengers at 135 pounds, it’s not outlandish to think that Tate could be fast-tracked back into the title picture if she defeats Vieira. That’s an idea she has considered.

“If you go out there and you get a real great finish over a woman who is a very tough fight, tough to beat, then [maybe a title shot happens]. But if it’s not, if it’s a little bit more competitive [then maybe not]. Either way, I still feel like one more fight probably before [a title shot]. Because I don’t want to waste time, but I’m also not in a rush. Everything will be when it’s meant to be, at the time that it’s meant to be.”

Tate isn’t willing to look past Vieira but she did highlight Aspen Ladd as one potential name who could serve as that bridge opponent to a proper title shot if Oct. 16 goes well.

Same as any other bantamweight, Tate still has her work cut out for her considering that the greatest female fighter of all-time — Amanda Nunes — remains the undisputed queen of the division. Nunes smashed Tate in UFC 200 to end Tate’s title reign, but “Cupcake” has already plotted out a dream scenario back to gold that leads through both Nunes and Holm.

“In my mind, the way that I have this played out, that I really want it to be, is that I win the title and then Holly fights me for the title,” Tate said.

“That would be like my perfect storm, my perfect scenario. But you know what? Either way, before this is all said and done, Holly and I will fight each other. I’m not dodging her. She’s great and everything, I appreciate her, but I think time and place is very important. So right now that’s not the fight we’re looking for, but we’ll get there eventually. Hopefully when I’m the champion she’ll be able to challenge me for the belt.”