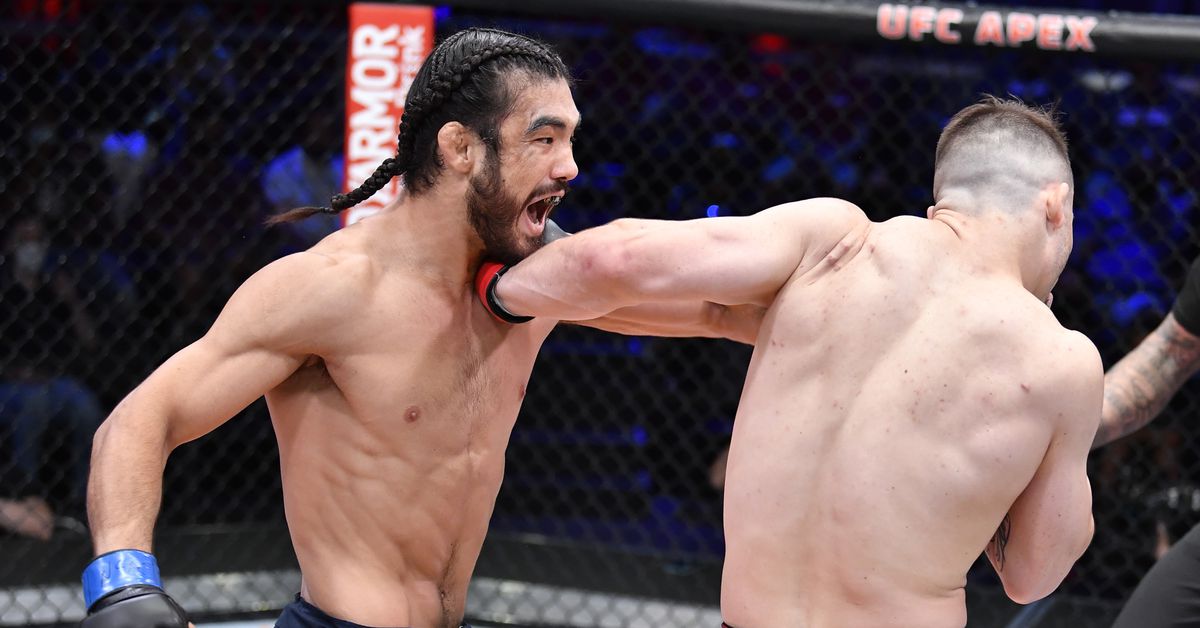 With the first punch he threw, Josh Quinlan set the end in motion against Logan Urban in the headliner of Week 2 of DWCS Season 5.

Quinlan’s right hand put short-notice replacement Urban on roller skates before a series of follow-ups finished the job just 47 seconds into the first round, bringing Tuesday’s show to a quick close at UFC APEX in Las Vegas.

The highlight-reel knockout was one of two sure things to earn a UFC contract, though they weren’t the only performances to secure a deal. For the second straight week, UFC President Dana White handed out five UFC contracts, announcing that Quinlan, Carlos Vergara, Chidi Njokuani, Saimon Oliveira and Chad Anheliger are octagon-bound.

Check out Quinlan’s vicious finish below.

Njokuani no overnight success vs. Sousa

After almost 14 years as a professional, middleweight Njokuani made his best case for a trip to the octagon. The younger brother of UFC and WEC vet Anthony Njokuani, Chidi Njokuani’s coming out party was nearly ruined by a trio of illegal knees that resulted in two timeouts and a point deduction for Mario Sousa, who was unable to control his weapons in the opening frame. Knees wound up being the turning point for the younger Njokuani, whose shot up the middle badly hurt Sousa and sent him to the mat in the third round. With a series of brutal elbows, Souza turned to his side and gave Njokuani the win at the 1:35 mark of the final frame.

Over three rounds, bantamweight Oliveira certainly looked like the harder-working man then Alday, whose preference for tight standup contrasted sharply with his Brazilian counterpart’s spinning backfists and flying knees. Oliveira’s flash turned out to be less effective in deep waters than his wrestling, which he relied on despite visibly hurting Alday on the feet on two occasions. In a closely contested fight, his workrate was enough to convince two of three judges he was the winner via scores of 29-28 twice with one dissenting for Alday by the same tally.

Flyweight Vergara was a shoo-in for a UFC contract after obliterating Bruno Korea in just 41 seconds. Korea tried to draw Vergara into his strikes, circling away and firing punches and kicks as his opponent closed. Vergara showed no respect for that approach and soon landed a right hook that rattled Korea’s jaw. In the clinch, Vergara then snuck in a knee to the liver that instantly shut down Korea’s body and brought a tap for a quick TKO.

ONE Championship bantamweight vet Gafurov sought to become the first fighter from Tajikistan to earn a UFC contract, and if grappling were the deciding factor, he might have put himself in line for one. Unfortunately for him, two of three judges put more value in Anheliger’s reversals and striking, and the American, a 5-1 underdog, took home the split decision and upset via scores of 29-28, 28-29, 29-28.

After getting dominated on the mat in the first, Anheliger dropped Gafurov with a knee to the body as they righted themselves. And in the final round, he was just a little sharper in all ranges, getting top position late in the fight and scoring with ground and pound as Gafurov tired.

Midnight Mania! Chiesa Vs. Jingliang Added To UFC 287
Jan Blachowicz is grateful for the title shot 🙏
Adam Fugitt Ready To ‘Prove Doubters Wrong’ After Debut Loss | UFC Fight Night 218
Conor McGregor and Michael Chandler To Coach The Ultimate Fighter 31 | Dana White Announcement
Breaking down McGregor vs. Chandler on TUF and in the Octagon