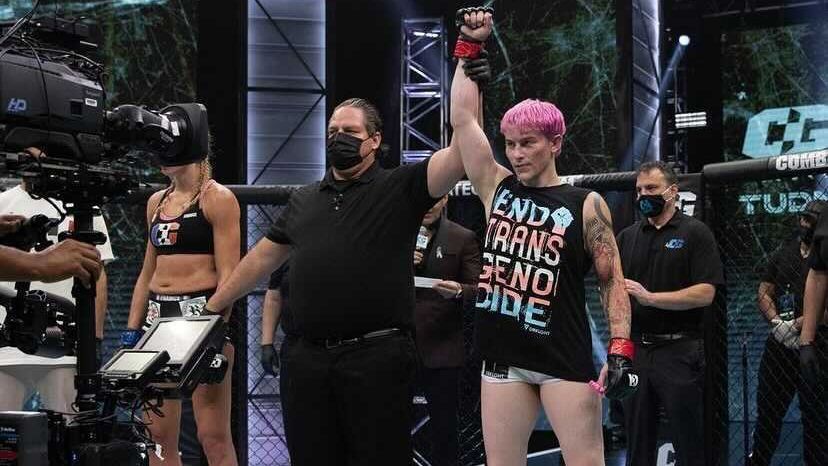 Alana McLaughlin, the first openly transgender athlete to compete in mixed martial arts in the United States since 2014, won her MMA debut Friday night, beating Celine Provost via submission on the Combate Global prelims in Miami.

McLaughlin used a rear-naked choke to get the finish at 3 minutes, 32 seconds of the second round.

A former member of the U.S. Army Special Forces, McLaughlin is just the second transgender woman to fight in MMA. Fallon Fox, who was the first, was cageside watching McLaughlin.

In the first round, Provost rocked McLaughlin with punches several times and looked to be on the verge of a finish. But in the second, McLaughlin took Provost down, got her back and cinched in the choke.

McLaughlin, 38, passed all the medicals, including a hormone panel, issued by the Florida State Boxing Commission in order to compete Friday night, according to Combate Global executive Mike Afromowitz. McLaughlin has been training at MMA Masters in the Miami area.

It was not easy for Combate to find her a foe, she said.

“It was a nightmare trying to find an opponent,” McLaughlin said before the bout. “I have nothing but respect for [Provost].”

McLaughlin is hoping to be a pioneer for transgender athletes in combat sports, saying she wants to “open the door” and “make space” for others like her.

Patricio Manuel made boxing history in 2018 when he became the first transgender male to compete in a pro boxing match in the United States. Manuel beat Hugo Aguilar via unanimous decision.