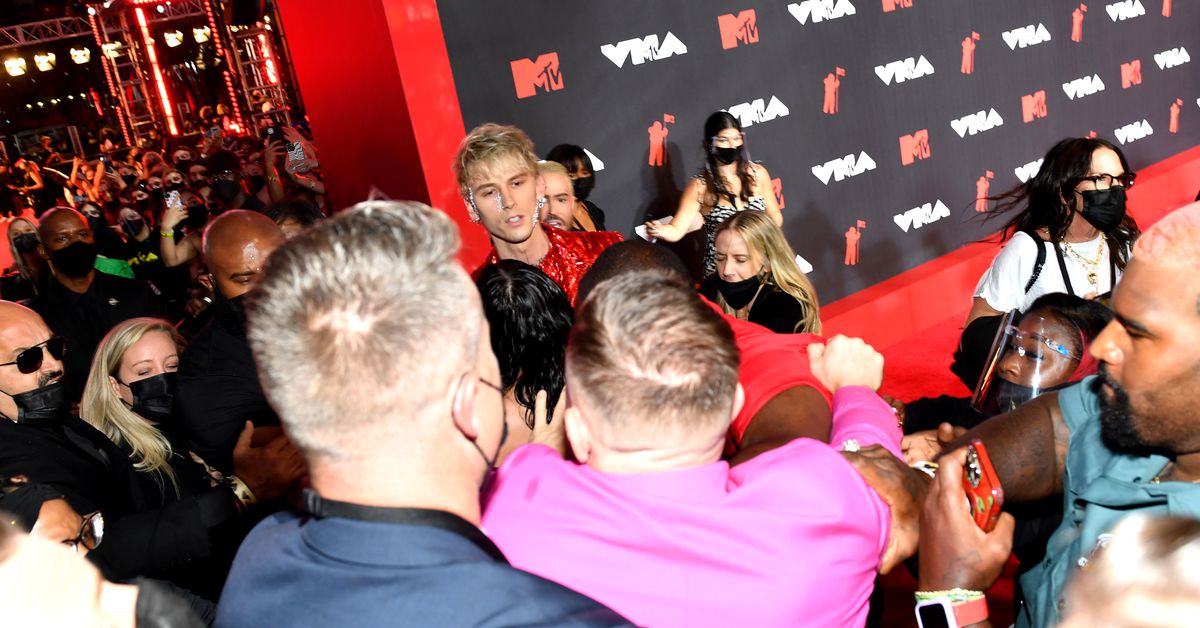 Conor McGregor and Machine Gun Kelly had to be separated on the red carpet after an altercation occurred at the MTV Video Music Awards on Sunday in New York.

Photos surfaced of the incident that showed the former two-division UFC champion McGregor and musician Kelly (real name Colson Baker) being separated by security after reportedly nearly coming to blows.

A video was then posted that showed McGregor and Kelly standing across from each other before it appears the Irish superstar made a move towards the Cleveland, Ohio native, which then forced security to rush into stop them before an actual brawl broke out. Kelly’s girlfriend Megan Fox was quickly pulled out of the melee as event officials attempted to calm the situation down.

According to a report from TMZ, the altercation started after McGregor allegedly asked Kelly for a photo, which was denied. That somehow escalated into Kelly apparently pushing McGregor, which made the ex-UFC champion stumble backward while spilling his drink.

That’s when McGregor allegedly threw his drink at Kelly, which only escalated the situation further as security attempted to keep the two celebrities apart.

Once cooler heads prevailed, Kelly and Fox were both seen walking the red carpet together before entering the building. Kelly is slated to perform alongside Travis Barker during the broadcast.

As for McGregor, he was eventually handed back his walking cane, which he was using while still recovering from a broken leg suffered in his fight against Dustin Poirier at UFC 264 in July. McGregor was accompanied by his longtime girlfriend Dee Devlin, and despite the altercation, both were seen in the audience once the show actually started.

Representatives for McGregor did not immediately respond to MMA Fighting for comment on the matter.

Since suffering the injury in July, McGregor has resided in Los Angeles doing rehabilitation on his leg after his surgery was performed at nearby Cedars-Sinai hospital.