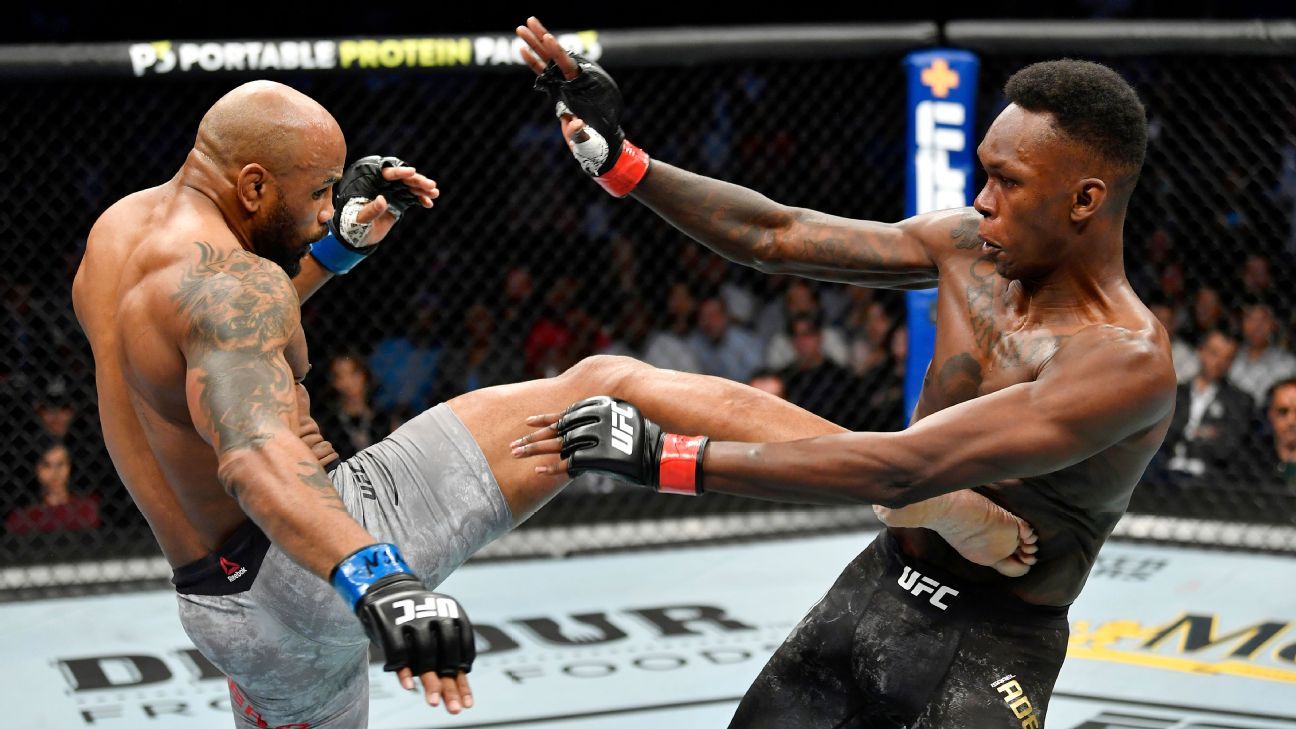 Yoel Romero makes his Bellator debut on Saturday night, and when he steps inside the cage to meet former light heavyweight champion Phil Davis in the main event of Bellator 266 at the SAP Center in San Jose, California, it will be a long-awaited unveiling of something special.

Why is this appearance by a 44-year-old who has lost four of his past five fights so highly anticipated?

For one thing, Romero is a can’t-look-away enigma. He is a two-time Olympic wrestler and 2000 silver medalist who has produced his greatest MMA highlights not by controlling opponents on the canvas but by knocking them out in stand-up fighting. Romero looks the part of an extraordinary athlete just by standing in front of you, and when he moves he does so with graceful explosiveness, something he exhibited in his two wins with a flying knee. And this is a man whose robustness is sustainable. Romero’s past six knockouts have come in the third round.

Some of Romero’s most memorable moments have come in the periphery of those fights. After knocking out Luke Rockhold in 2018, he got in the face of his dazed opponent and planted a kiss on him. When Michael Bisping gave him the finger during a 2016 post-fight interview, Romero shouted into the microphone, over and over, “I love you, Mike!” And in an interview with ESPN a couple of years ago, Romero spoke with terrifying intensity about the inspiration that drives him.

That Romero has been out of action for 18 months and is making his return in a new promotion, in a new weight class, adds to the intrigue.

As for the string of defeats? Consider Romero’s dance partners.

Romero’s most recent fight, in March 2020, was a decision loss to Israel Adesanya. That challenge for the UFC middleweight championship was not a thing of beauty. In fact, it was mostly two statues staring at each other for 25 minutes. Nonetheless, that fight resulted in four title bookings in Romero’s past five fights.

The longtime 185-pounder from Cuba lost two close fights to Robert Whittaker, one of them while the Aussie was undisputed champ, the other a tussle for an interim belt. Romero missed weight for one of those bouts, as he did the day before he knocked out Rockhold, another ex-champ. Romero lost to future title challenger Paulo Costa, and afterward he cashed one of the three Fight of the Night bonus checks he pocketed following his five most recent fights.

Now he’s finally set to headline a Bellator show — at 205 pounds. Romero originally was slated to make his debut in May as part of the Bellator Light Heavyweight World Grand Prix, but he did not clear a medical screening. He was set to face another former UFC fighter making a Bellator debut, Anthony “Rumble” Johnson, but the tournament went on without Romero. He now gets Davis, who lost to champion Vadim Nemkov in an April quarterfinal.

What will Romeo bring to his Bellator debut? It’s a good bet something special. Here are four things to know about Yoel Romero.

1. Romero is on the short list of greatest wrestlers in MMA history

If we’re talking about the most decorated wrestlers ever to set foot in a cage, it comes down to Kevin Jackson and Mark Schultz. Both won Olympic gold. Both won two world championships. But Schultz competed only once in MMA, while Jackson fought just six times. One of Jackson’s bouts was for the inaugural UFC light heavyweight championship in 1997, and he lost to Frank Shamrock by submission in just 16 seconds. So Jackson’s MMA run was short in more ways than one.

The most accomplished wrestler to go on to a sustained MMA career might be Henry Cejudo. Before capturing two UFC titles and becoming a corny stand-up comedian, he was a 2008 Olympic gold medalist.

2. Davis will be the most decorated wrestler Romero has fought in MMA

Before getting into that, first things first: Here’s a caution against letting the singlet accolades sway you into thinking Romero plies his trade inside the cage as a wrestler. On the contrary, he has shown no interest in grinding out wins. When Romero ended his 13-fight run in the UFC two years ago, he had seven knockouts and 10 knockdowns, tying him for fourth all time in both categories among middleweights. He was second only to the great Anderson Silva with eight post-fight bonuses. Those checks don’t reward lay-and-pray grappling.

The lone wrestling-related appearance in his old promotion’s statistical top 10: Romero owns the 10th-best takedown defense among middleweights (80.6%). Meaning: He prefers to stand and bang, and he has shown himself capable of dictating where his fights play out.

Is Davis capable of taking Romero out of his comfort zone?

Among Romero’s 18 bouts over nearly a dozen years in MMA, a couple of opponents stick out. They had credentials that made them strong candidates to maybe, just maybe, test Romero a little with wrestling. Chris Weidman was a two-time NCAA Division I All-American who finished third in the 2007 nationals. Derek Brunson was a three-time Division II All-American.

Weidman tried eight takedowns in his 2016 fight with Romero and was successful on just one. One failed takedown attempt resulted in Weidman taking a fight-ending knee to the cranium. Brunson fared better in his 2014 meeting with Romero, landing three of five takedowns. But Brunson, too, ended up in a heap on the mat as another among Romero’s knockout victims. Both fights ended in the third round. Romero has lasting power.

Davis has never been finished in 29 pro fights, and it’s not because of slick stand-up. He was a 2008 Division I wrestling champion and 2006 runner-up. Can he grind one out against Romero?

3. Romero’s most lucrative victory did not take place inside a cage

In 2016, weeks after he had defeated Jacare Souza by split decision, Romero was informed that he had failed a drug test and faced a U.S. Anti-Doping Agency suspension. Romero’s team contended that he had taken a supplement that contained a banned substance that was not listed on the label. This was confirmed by a USADA test on the supplement.

Romero sued the supplement company and initially was awarded over $27 million for lost wages, emotional damage and reputational harm. This summer that judgment was reduced to $12.45 million, with more possibly to come.

4. Romero grew up with the great Joe Louis (sort of)

Yoel Romero says Shaquille O’Neal called him and told him he was rooting for him before he lost his fight at UFC 248 vs. Israel Adesanya in 2020.

Romero’s half-brother is Yoan Pablo Hernandez, a former cruiserweight world champion boxer. Like his older brother, Hernandez competed for Cuba in the Olympics. And like Romero, Hernandez later defected to Germany.

In his adopted country, Hernandez acted in a 2010 film about famed German boxer Max Schmeling, portraying Joe Louis. This was a significant role, of course, because despite Schmeling having already been a world champion, he is best remembered for his 1936 knockout of the “Brown Bomber” at Yankee Stadium.

Schmeling was booed at the stadium, and when Louis won the rematch two years later at the same ballpark by first-round knockout, he became an American hero.

Hernandez went on to win two world titles after that acting gig before walking away from the ring. Last year, he returned from a six-year absence and was knocked out, ending a 15-fight winning streak.

Romero, who has not fought since March 2020, hopes to avoid carrying on that family legacy.