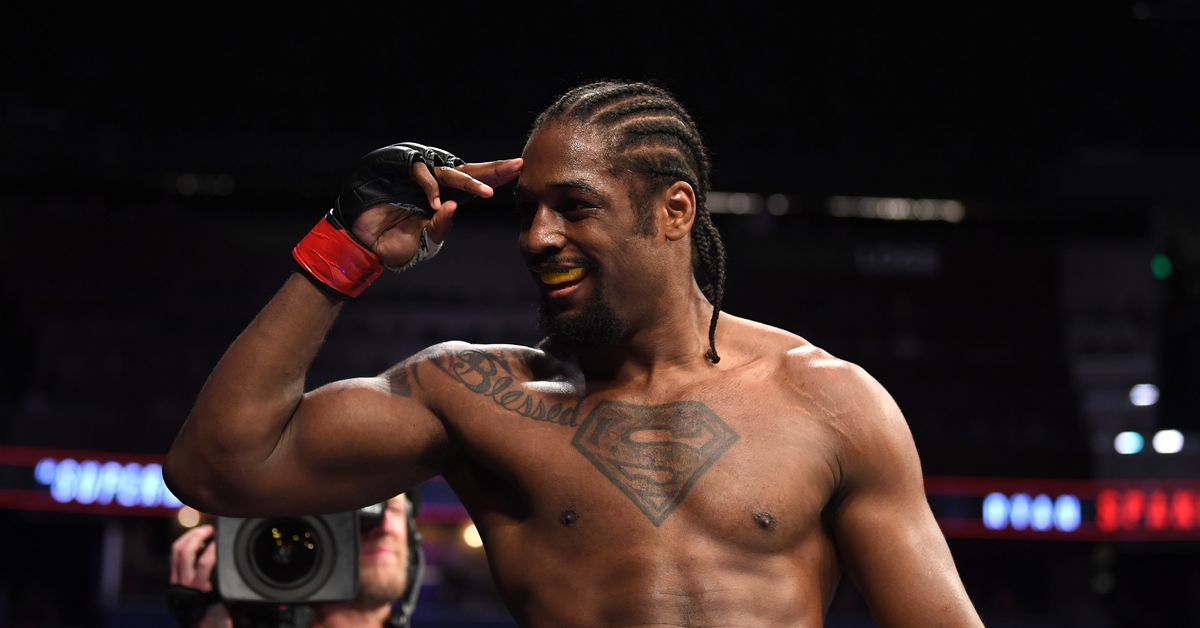 Thus far, Spann is looking like a pretty great “Contender Series” pickup. “Superman” was not a complete product upon his signing (and still likely isn’t), and he did have some losses on his record. At the same time, Spann has obviously physical gifts and an excellent team behind him. That combination is highly likely to payoff eventually, and so far, Spann has lived up to his potential.

The prospect has won fix of six bouts inside the Octagon, advanced into the rankings, and is now ready for his first main event slot. Let’s take a closer look at his skill set:

Spann has the reach and power to be one of the nastiest strikers in the division. As it stands, his kickboxing is still coming along, but he’s scored all but one of his knockout wins in the second half of his pro career — a clear-cut sign of improvement.

“Superman” is one of those fighters who really wants to be a technical striker, even if he’d likely have scored more knockout wins over the course of his career had he simply bit down on his mouthpiece and threw really hard. Whenever Spann initiates, he does so with short combinations, usually ones that begin with the jab. He’ll stick his long jab once or twice, follow up with a right hand, and maybe add on a left hook (his best punch).

What makes Spann’s boxing a bit more interesting is his pace. Often, Spann is happy to stalk opponents in a rather plodding manner, initiating offense at an inconsistent pace. His bout vs. Devin Clark was a great example. Spann repeatedly backed his foe into the fence then … didn’t really do anything outside of a lazy jab for much of the fight.

When Spann does turn it on, however, watch out! Against Clark, he finally realized the wrestler was terrified of getting hit by him and was inspired to turn up the heat. Opposite other opponents, Spann has really thrived in extended combinations. It seems that getting punched in the face convinces Spann to fire back hard, which is often all he needs to do to get his opponent out of there quickly (GIF).

Really, Spann seems to want to be a counter puncher. Another habit that supports this idea is his frequent instinct to counter kicks. Spann actually answers kicks quite nicely, rarely allowing his opponent to freely blast him in the leg. Opposite Johnny Walker, Spann scored a serious knockdown by side-stepping Walker’s front kick before blasting him with the left hook (GIF).

Now, here’s where things get interesting … and perhaps a bit odd!

Despite his UFC reputation as a knockout artist, Spann spent the majority of his career on the regional scene scoring takedowns and wrapping up submissions. He doesn’t yet seem fully comfortable with this transition, and as a result, Spann often winds up seeking the clinch/takedown almost immediately after winning a kickboxing exchange!

Offensively, Spann does good work in the clinch, typically looking for opportunities to change levels into the double leg. Interestingly enough, I’ve also stumbled upon several clips of Spann making use of the overhook throw to great effect — a likely product of length and athleticism.

Though Spann seems to do a good job of fighting for head position from close quarters, it does have to be mentioned that his two most recent losses came opposite opponents countering his wrestling attempts. Quite frankly, Spann was kicking Walker’s ass, but when the Tennessee-native tried to change levels to the hips, he placed his head on Walker’s hips. The explosive Brazilian immediately responded by dropping a flurry of hammer fists and elbows, and Spann hit the canvas.

Similarly, Spann was pressuring Karl Roberson into the cage on his first “Contenders Series” appearance. Roberson framed off his face and allowed Spann’s own forward pressure to provide much of the force behind the elbows that felled him.

In short, Spann may need to focus a bit more on his defense while in pursuit of the grappling.

Spann may only hold the rank of blue belt, but he’s finished 11 foes via tapout as a pro.

Seven of those finishes came via guillotine, and the rest were rear naked chokes. Spann’s guillotine game definitely has some depth to it, so let’s focus on that. Spann’s ultimate goal is to transition to the power guillotine, which involves sinking one arm entirely around the neck then using the non-choking arm to push down and into the strangle.

On both the regional scene and inside the Octagon, however, Spann has gotten there in a variety of ways. In the clip above, he stuns his opponent then immediately attacks the neck. However, he’s also made great use of the guillotine to counter takedown attempts, making sure to fall to his hip at the correct angle. He’ll use the threat of the regular guillotine to occupy his opponent’s hands, allowing him to scramble back up or readjust his grip to the power grip.

Based on how quickly his opponents tap or nap, Spann has this guillotine mastered.

Spann is still a bit rough around the edges, a fighter figuring out how exactly it is he wants to perform at the highest level. Fortunately, Spann’s size and physical gifts allow him these opportunities to develop while still fighting at a very high-level, which is indicative of a very high overall ceiling for the 30-year-old pro.

Andrew Richardson, a Brazilian jiu-jitsu brown belt, is a professional fighter who trains at Team Alpha Male in Sacramento, California. In addition to learning alongside world-class talent, Andrew has scouted opponents and developed winning strategies for several of the sport’s most elite fighters.

Watch: The Top Finishes From UFC San Diego Fighters (Preview)
Dana White on UFC fighter pay: ‘Mind your business’
Bo Nickal Not Upset About UFC Contract Snub: ‘I’m Here To Be No. 1 Pound-For-Pound’
Dominick Cruz Has No Clue Why Chito Vera Is Mad At Him – MMA Fighting
Bellator rebooks Pico-Kennedy bout for October