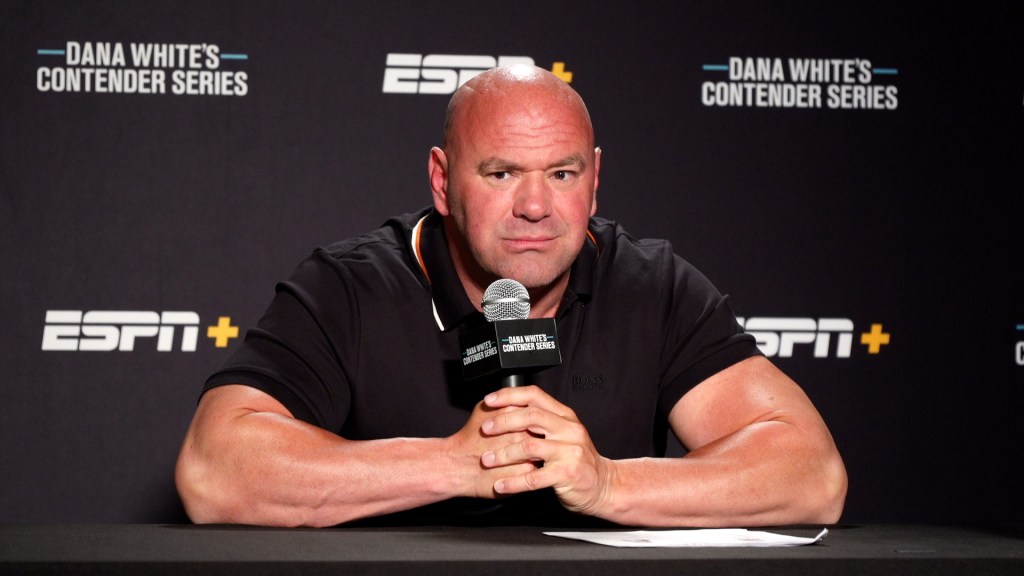 With White continuously mocking Paul’s choice of opposition, the YouTube star offered to fight Masvidal, so he can exploit prime UFC fighters’ “lack of boxing ability.” But White thinks Paul should pivot to the likes of former UFC middleweight champion Anderson Silva, who’s competed at light heavyweight, instead of tactically picking on smaller fighters.

“Come on, Masvidal is 170 pounds,” White told “The Daily Telegraph.” “He likes 170 pounders. Go fight somebody your own size. Anderson Silva is not in contract, he’s 46 years old, that’s the age group you love to fight, and he’s your size, and he’s actually winning fights. If you look at Jake Paul’s history, Jake Paul either fights basketball players who have never fought, or he wants to fight washed-up older guys who haven’t fought in years. Anderson Silva has actually been boxing, he’s won some fights, he’s 46 years old, and he’s in your weight class. There you go, that’s a no brainer, fight Anderson Silva.”

Jake Paul skeptical of Triller’s $30 million offer for Belfort bout: ‘They don’t have that much money’

Jorge Masvidal threatens to ‘put a hurting’ on Jake and Logan Paul: ‘I’m gonna beat up all the Pauls’

Even if Masvidal wanted the fight, he’d face hurdles in making it happen without White’s approval since he’s currently under contract with the UFC. That’s why White thinks Paul should just face Silva instead.

“You’re not gonna fight 170-pound Jorge Masvidal who’s ranked top 10 in the world,” White said. “No. He fights here, he’s under contract with us. Go f*cking fight somebody your own size. He just fought Tyron Woodley. Tyron Woodley is 40 years old, hasn’t won a fight in three years, hasn’t knocked somebody out in his weight class in five years. That’s who Jake Paul wants to fight, and he barely got out of that fight.

“He barely won that one. Now you want to fight a guy who’s ranked in the top 10, that weighs 170 pounds, is still relevant in the fighting world when you have Anderson who’s not under contract with anybody and has just won two boxing matches. There you go. You’re welcome. I just made your next boxing match for you, but I bet you don’t see that one happening. Wanna bet?”

Paul, upon hearing about White’s comments, took the opportunity to respond on Twitter.

“Dana admitted this morning that I would destroy “170” pound Masvidal,” he tweeted, along with a screenshot of a recent headline in which Derek Brunson said he’d take a “tune-up” fight with Paul. “So Dana will you give Brunson permission to make some real money? Dana?”

UFC Vegas 68: Lewis vs Spivak Weigh-in Results
Islam Makhachev Disappointed In Lack Of UFC 284 Promotion
Classic McGregor Beats ‘Very Hittable’ Chandler
In Sabah Homasi, Brennan Ward finally has opponent he can amp up for
The CALL-OUT that started it all! 😬