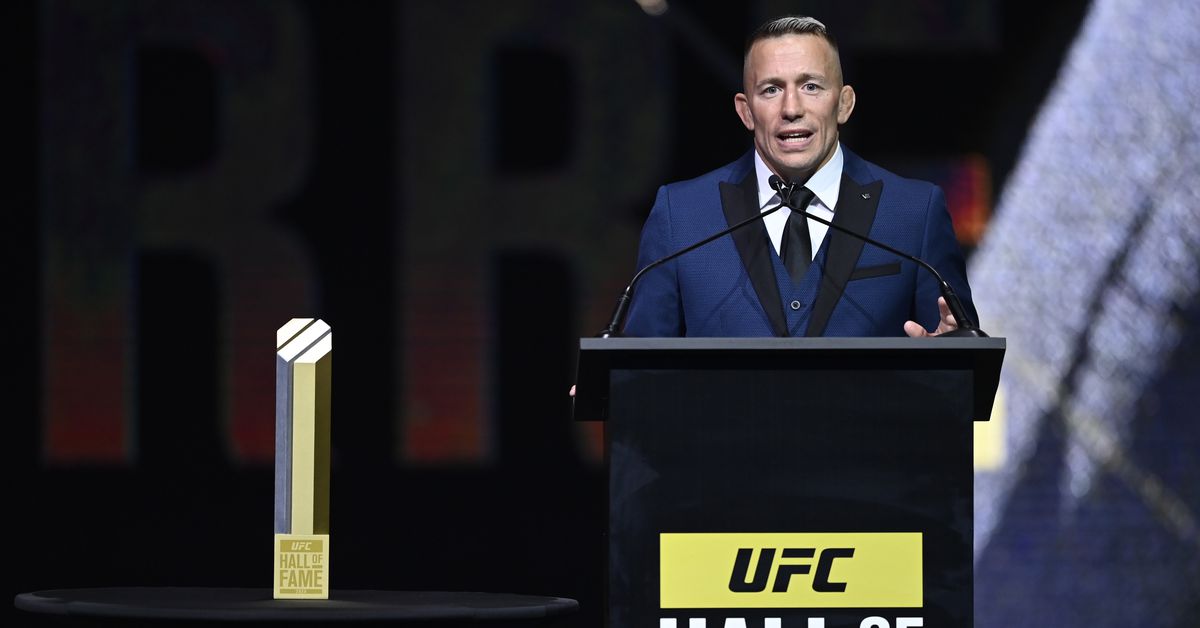 Following a global pandemic that one year ago shut down the UFC Hall of Fame ceremony, the class of 2020 was finally inducted on Thursday night in Las Vegas.

The night was capped off by former two division UFC champion Georges St-Pierre, who was inducted into the Modern Era while being hailed as arguably the greatest mixed martial artist of all time.

St-Pierre remains one of only a handful of fighters to ever hold titles in two different divisions. He concluded his long reign at welterweight and then captured the UFC middleweight title in his final fight in 2017.

Now, St-Pierre can add the UFC Hall of Fame to his long list of accolades.

“I’ve always wanted to be a champion but it also meant a lot to me to have a positive impact on my sport,” St-Pierre said. “To change the game. When I retired from competition, I did with great pride at having made that impact.

“It’s funny. I never really liked to fight. It’s a weird thing to say from a Hall of Famer, but I never enjoyed it. If I could snap my fingers before every fight to fast forward and open my eyes and the fight was over, I would have done it every single time. I did it because I could have the freedom, the health, the wealth and the life that I have.”

Former UFC heavyweight champion Kevin Randleman was posthumously inducted into the Pioneer Wing in the Hall of Fame after a 15-year fight career that started after he was a two-time NCAA champion from Ohio State University.

Praised for his unbelievable athleticism, Randleman was the fifth-ever heavyweight champion in UFC history before eventually moving onto PRIDE Fighting Championships.

It was there Randleman pulled off one of the biggest upsets in MMA history when he knocked out Mirko CroCop with a vicious left hook followed by his signature ground and pound.

Sadly, Randleman passed away in 2016 following a brief battle with pneumonia.

For his induction into the UFC Hall of Fame, Randleman was first introduced by former opponent Bas Rutten, who later became one of his closest friends. He was then joined on stage by Randleman’s wife Elizabeth, his son Santino and his best friend and fellow UFC Hall of Famer, Mark Coleman.

“Kevin Randleman was an extraordinary human,” Elizabeth Randleman said about her husband. “He loved and respected the sport with every inch of him. Hard work, never quit, baby. Despite being such a beast in the cage, there was another side to Kevin. Because he was one of the kindest souls you’d ever meet.

“Kevin was such an incredibly humble person and he had been through so much but he always managed to come out on the other side of whatever darkness was tossed his way.”

Coleman also paid homage to his friend after he first met Randleman while he was an assistant wrestling coach at Ohio State before they both became champions in MMA. Coleman remained in Randleman’s corner from the first fight of his career until his last and he was proud to honor him on Thursday night.

“Kevin you did it,” Coleman said. “You made it in the UFC Hall of Fame.”

Considered one of the greatest title fights in UFC history, Jon Jones and Alexander Gustafsson were honored for their epic war at UFC 165 back in 2013.

The back-and-forth battle was the first time to date that Jones was pushed to the brink after he essentially ran roughshod through the light heavyweight division. On that night, Gustafsson gave Jones everything he could handle and more as they engaged in a grueling and bloody battle for 25 consecutive minutes.

In the end, Jones was able to stave off Gustafsson’s advances to secure the victory but that was still arguably the toughest test of his entire career.

“That was such a difficult fight,” Jones said during the ceremony. “Thank you to Alex for being a part of that. Alex taught me a lot about myself.

“That fight with Alexander Gustafsson was one of the toughest things I’ve had to do in my career. The fourth and fifth rounds I had to pull something out I didn’t know I had inside of me.”

Unfortunately due to travel restrictions, Gustafsson was unable to attend the event, though he sent a message along with his thanks for the honor.

As for Jones, he welcomed two of his coaches on stage — striking coach Brandon Gibson and wrestling coach Israel Martinez — and also managed to give a brief update on his heavyweight future in the UFC while revealing that he’s currently weighing 250 pounds with plans to pack on at least another 20 pounds before competing again in 2022.

“I want to make Francis [Ngannou] look small,” Jones said to the crowd in Las Vegas. “That’s going to be tough to do.”

The former executive director of the Nevada State Athletic Commission was inducted to the contributor wing after the tireless efforts he made to help expand MMA legalization including a decade-long fight to finally get the sport into the state of New York.

Ratner has also served as the regulator for the UFC when the promotion travels into countries where there’s no official athletic commission, which means he helps to assign referees and judges as well as overseeing all other facets of a show operation.

“To say I’m overwhelmed isn’t even the right word,” Ratner said while accepting the award.

During the course of his 15 year career with the UFC, Ratner has personally witnessed all 50 states in the U.S. as well as dozens of others from across the globe legalize MMA. He was introduced by former UFC owner Lorenzo Fertitta, who served alongside Rather in the Nevada Athletic Commission, as well as UFC chief operating officer Lawrence Epstein.

What started as auctioning off his fight-worn uniforms for charity has now transformed into his own non-profit organization, which has raised hundreds of thousands of dollars for underserved communities.

That’s what led to former UFC interim lightweight champion Dustin Poirier receiving the first ever Forrest Griffin Community Award, which was handed out during the UFC Hall of Fame ceremony on Thursday night in Las Vegas.

Through his Good Fight Foundation, Poirier has done everything from build a playground for special needs children to purchase child car seats for new mothers in his native Louisiana to building water wells in Uganda.

As part of his award, Poirier’s Good Fight Foundation will also receive a $25,000 donation from the UFC so he can continue to do charitable work throughout his community and other causes across the globe.

“It’s a true honor to be the first recipient of the Forrest Griffin Community Award,” Poirier said. “It’s so awesome for the Good Fight Foundation to be recognized for all the good it’s been doing to the underserved communities in Louisiana and beyond now at this point.”

Before leaving the stage, Poirier fought back tears while also recognizing Suzy Friton, the longtime UFC makeup artist who recently died after a long battle with cancer.