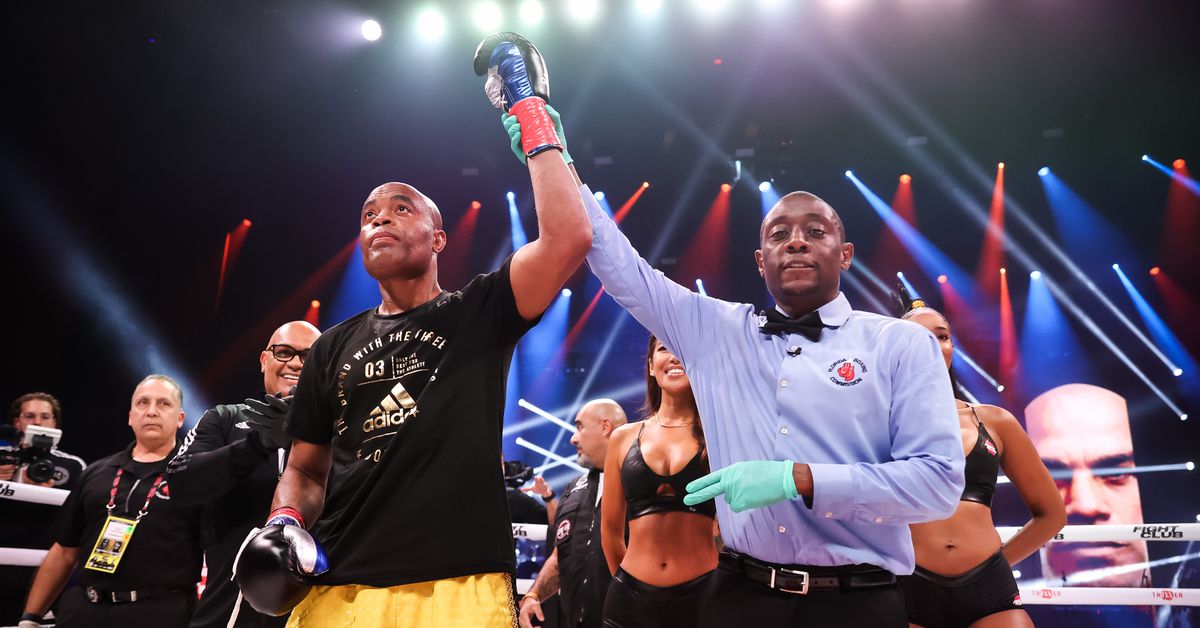 Anderson Silva has been thriving since making the move into boxing, racking up a pair of wins this year over Julio Cesar Chavez Jr. and Tito Ortiz.

Suddenly, the former UFC middleweight champion is being attached to all kinds of possible fights with a number of potentially lucrative matchups.

While Silva still has multiple fights on his promotional contract with Triller Fight Club, the 46-year-old legend still has the ability to compete for other organizations, and there’s one fight in particular that has him interested right now.

“When I finished the fight with Tito and I saw on my Twitter and my Instagram, everybody talking ‘you need to fight with [Floyd] Mayweather!’” Silva said on The MMA Hour. “I don’t know, that’s insane! I don’t know if I can fight on the same level as Mayweather but this is a challenge for me.

Mayweather has maintained a relationship with Showtime for the past several years and in 2017 delivered the second most lucrative domestic pay-per-view with “The Money Fight” against former two-division UFC champion Conor McGregor.

More recently, Mayweather took part in an eight-round exhibition bout against YouTube celebrity Logan Paul, and the event did huge numbers on pay-per-view with reportedly around 1 million buys.

Much like that matchup, Silva would have a significant size advantage over Mayweather, but the Brazilian acknowledges that an exhibition between them would make more sense than trying to book an actual fight.

“When people talk about [the size difference], I say the same – I’m too big,” Silva said. “But Mayweather fought with Logan Paul and I can fight, too. I can [weigh] 189, 190 [pounds] and fight Mayweather. Let’s go see.

“Of course this fight were to happen, it’s a show fight, not a real fight, but I think that’s good. Let’s go see.”

Mayweather has stated previously that he’s retired from professional competition, so an exhibition would be the only way Silva would likely get a chance to square off with him. Outside of that option, he also addressed the possibility of a boxing match against Jake Paul, who just recently moved to 4-0 in his career with a split decision win over ex-UFC champ Tyron Woodley.

Even UFC President Dana White has presented that as a fight he’d be interested in seeing after Paul tried to call out two-time welterweight title challenger Jorge Masvidal as his next opponent.

“A lot of people are talking about that,” Silva said about facing Jake Paul. “I’m just waiting. I’m preparing my mind. I’m preparing my body. I train everyday with my coaches to do my best. I don’t know. We’ll see.”

The same can be said for Silva drawing Logan Paul as a future opponent. While anything is possible, he mostly prefers to pay homage to the work the Paul brothers are doing to raise their profiles in the sport of boxing. He’d like to see more people giving Jake and Logan Paul credit for the boxing business they’ve been able to build in such a short amount of time.

“People need to respect them both, because both kids are doing something special. The kids prove this world has changed.”

Away from his own boxing career, Silva also competed on the same night as former heavyweight champion Evander Holyfield when he made his return to the ring for a fight against another UFC veteran in Vitor Belfort.

At 58, Holyfield was competing for the first time in over a decade but he didn’t even make it out of the first round after Belfort blitzed him with punches as soon as the action got started.

Belfort was ecstatic with his victory after making a successful move over to boxing, but Silva believes his former opponent should have been a bit more respectful when it came to the fight with Holyfield.

“I can’t say it’s bad or not,” Silva said about Holyfield returning for the fight. “I believe in one thing. Let me give an example for you — I go fight with Mr. Evander Holyfield, I try to enjoy the moment and feel the fight. Why? Because this man changed the world and gave the opportunity for me to come fight boxing. OK, I win or not win but I do my best. When you knock him out, the man, the same Mr. Evander Holyfield and you enjoy and [scream], you don’t prove respect. You don’t prove respect.

“That’s what my coach teaches me everyday. When I fought Tito, I don’t do nothing crazy. I win. I’m working hard for the win, but I don’t go for disrespect. Different people have different opinion and different reactions. I think the fight Mr. Holyfield is a show for the people. Move, and it’s training. That’s my opinion.”