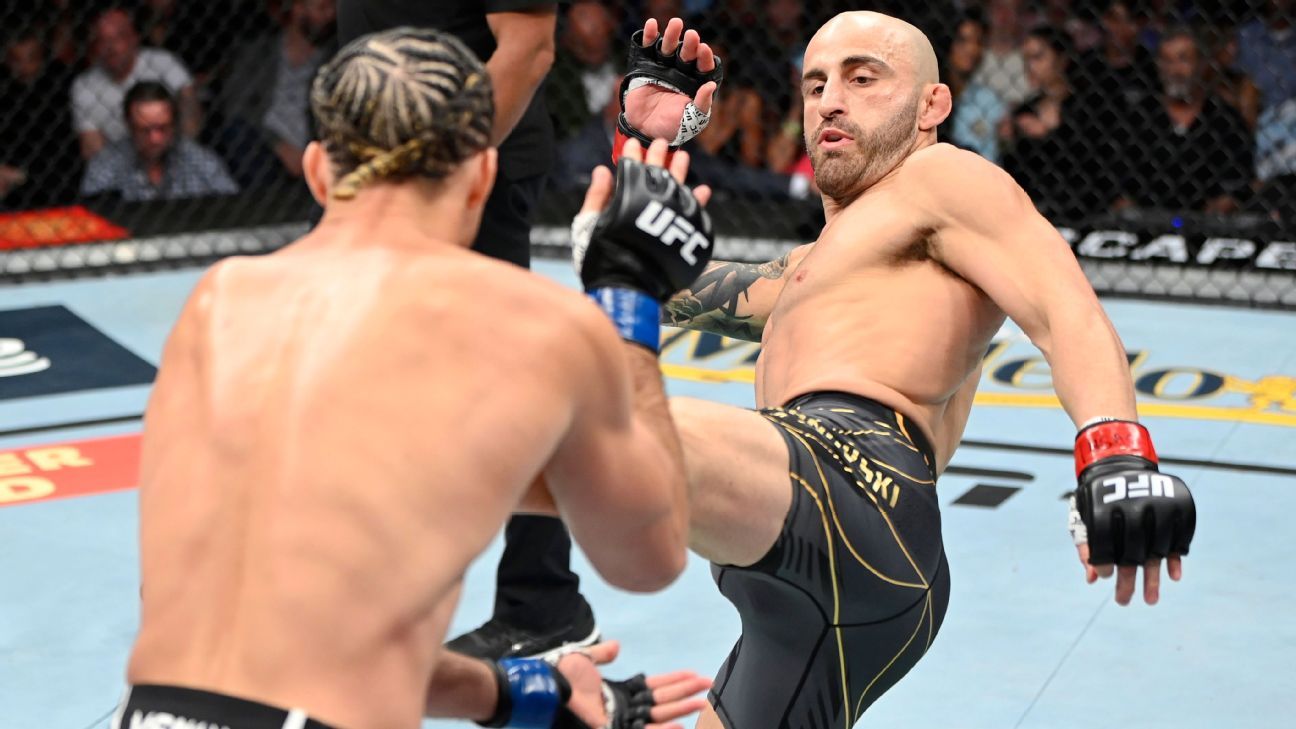 Alexander Volkanovski has quieted the doubters once again. With a tremendous performance and successful featherweight title defense over a very game Brian Ortega, Volkanovski continues to own one of the most dominant championship runs in recent history. One of the sport’s other dominant champions, Valentina Shevchenko, also defended her title on Saturday night at T-Mobile Arena in Las Vegas. Shevchenko had no problem with Lauren Murphy and finished the job via a fourth-round TKO.

But before the champions stepped foot in the Octagon, the fans were on their feet ahead of, and during, the Robbie Lawler–Nick Diaz fight. Despite the fans fully behind Diaz during the high-volume striking affair, Diaz couldn’t answer the referee’s call in the third and lost to Lawler by TKO.

So where do some of the biggest names off of UFC 266 go from here? Let’s take a look.

Who should be next: Max Holloway

It’s familiar, but it’s obvious. Volkanovski has bested Holloway twice. He took the belt from Holloway in 2019 and then defended his title for the first time against him in 2020. Both fights went the distance, and both have continued to haunt him in a way. There were some who felt Holloway should have won the first fight, and even more who believed he did enough to win the second one.

Regardless of who’s right and who’s wrong, the fact is Volkanovski will never move past Holloway until he fights him again.

Holloway is clearly the No. 1 contender at this moment. Personally, I’m not even a huge fan of seeing a full trilogy play out this fast. I think time apart can actually be pretty good for a rivalry. But in this case, it’s necessary. Holloway needs to be next.

Holloway fights Rodriguez on Nov. 13. Obviously, that throws a potential hurdle into the trilogy. If Rodriguez were to upset Holloway, he would be next up for Volkanovski.

Who should be next: Calvin Kattar

Ortega is now 0-2 in UFC title fights, but he’s only 30 years old, and I like his chances of getting a third crack at some point.

It might not even take him that long to get there, to be honest. The next fight seems obvious to me. It’s Kattar. They’ve both proven, beyond a doubt, they are elite featherweights. They’ve just come up short in some big spots, when they could prove they were the best featherweight.

Like Ortega, I think Kattar will get a title shot at some point down the road. Rankings-wise, this is the one.

He’s flying well under the radar, but if he wins his next fight — which I believe has to come against a very highly ranked opponent — we’re going to be talking about him as a title challenger. Coming off a loss, and with just one win in the past three years, Ortega needs to shore up his record right now.

If the UFC shows interest in this matchup, I think he’ll be inclined to accept it.

Who should be next: Winner of Joanne Calderwood vs. Alexa Grasso on Nov. 20

Same thing I say every time Shevchenko fights. Line up the next one. Whoever is up — who hasn’t fought her yet — is up.

Calderwood was supposed to fight her last year, but ended up losing out on the shot when she took a fight against Jennifer Maia after Shevchenko got injured. I’ve always felt we’re going to see Calderwood get her shot at one point or another. If she wins the next one, the shot is hers. And if Grasso beats her, it’s a shot for Grasso, but she’s been in the UFC for a while now. Beating Calderwood would arguably be her biggest win.

Santos was ranked No. 12 going into Saturday’s contest against Roxanne Modafferi, and she won that handedly. No one has talked about her as a title challenger just yet, because she needs wins.

But if for some reason Calderwood and Grasso aren’t available, I could see the UFC fast-tracking her to the belt. She’s going to be ranked inside the top 10 after Saturday’s win. She’s 18-1 overall. She’s been impressive in the UFC. It’s not the most likely option, but I don’t think it’s impossible.

Who should be next: Nobody. Retirement.

I don’t need to see it again. I didn’t feel awful about it. Diaz had some moments and I got the feeling that if he were to truly come back and be active, we’d probably see him perform better than he did on Saturday. But he told us before the fight this isn’t something he wants to do. I didn’t see anything in the fight that made me think otherwise.

Let this man live in peace. Again, I’m not overdramatizing this. Diaz didn’t look out of place inside the Octagon, but personally, I don’t need to see him back in there. If he wakes up on Sunday morning and decides being in there is where he belongs, I’d support him fighting again. But there’s certainly no need for it.

If Diaz were to fight again, it has to be an appropriate opponent. And if you look up and down the UFC roster, there really aren’t a ton of options. But what if … how about … can you picture it … Ben Askren? Askren could build a fight against Diaz. Askren is not a striker, he’s a grappler. There is danger in any fight, but as far as “safe” fights, fights in which we wouldn’t expect Diaz to take a ton of damage, Askren would be it.

Askren is retired but would he come back for a fun fight against a legend in Nick? Might be worth an ask.

Who should be next: Ketlen Vieira

I mean, why not? Andrade is the second-best flyweight in the world, behind Shevchenko. That’s obvious. But since she just lost to Shevchenko in April, she’s kind of in no-man’s land. And she knows it. Why else would she call for the winner of a strawweight title fight between Rose Namajunas and Zhang Weili?

But here’s a thought. Maybe she should fight outside of the 125-pound weight class … but what about looking back up? She’s fought at 135 before. Vieira was supposed to fight Miesha Tate in the main event of UFC Fight Night on Oct. 16, but Tate withdrew due to a positive Covid-19 test. How about Andrade stays busy and takes on a bantamweight?

She needs to think outside the box right now. And that would be it.

If Andrade wants a fight at 115 pounds, I don’t think it’s going to be a title fight. But what if it was against the former champion, Jedrzejczyk. Jedrzejczyk has basically made it known she’s only interested in fighting for a title, but it’s unclear if and when that will happen for her next. If the UFC wanted to make a No. 1 contender’s fight between two former strawweight champions, fans would be down. I don’t really see this one happening, but it’d be a fun booking if it did.

Leon Edwards: MMA saved me from being ‘dead, in prison or dead broke’
Longo-Weidman fighter Nazim Sadykhov on UFC opportunity at DWCS 50: ‘This is what I’m here for’
Bellator 284 video: Wrestling standout Pat Downey runs through opponent in MMA debut
UFC 278 Embedded, Episode 1: ‘There’s a huge gap between me and them’
Dana White’s Contender’s Series 50: Grading the winners