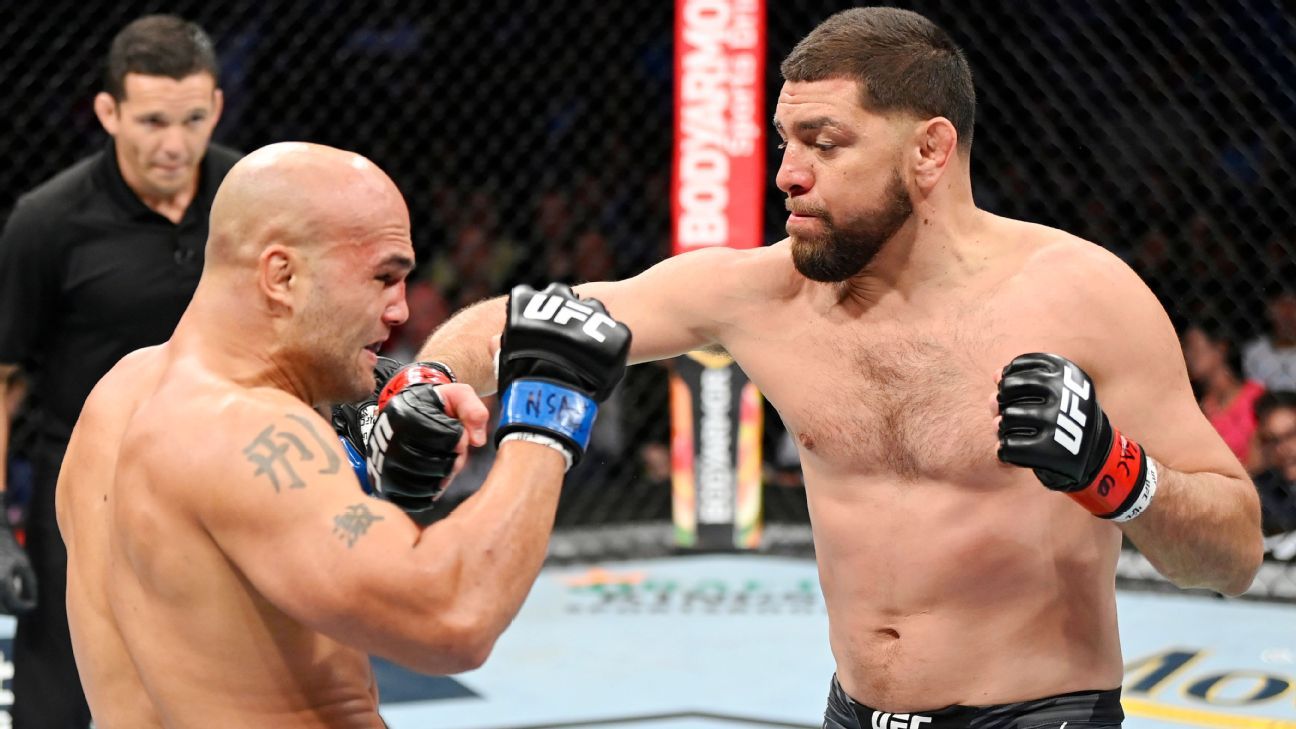 The main event and co-main event of UFC 266 featured big victories for reigning champions Alexander Volkanovski and Valentina Shevchenko, but the real stories of the weekend were Nick Diaz, making his return after a lengthy absence from the UFC, and Jon Jones, who after getting his fight inducted into the UFC Hall of Fame, was arrested on Friday night. Marc Raimondi, Brett Okamoto and Jeff Wagenheim react to the weekend and discuss what options lie ahead for both fighters.

Raimondi: UFC 266 was a fantastic card. Alexander Volkanovski fought through a ton of adversity to beat a supremely tough Brian Ortega and successfully defend his UFC featherweight title. The winner of the Nov. 13 fight between Max Holloway and Yair Rodriguez should be next for him. Valentina Shevchenko was flawless yet again in a title defense against Lauren Murphy. Eventually, I hope we’ll see her again versus Amanda Nunes. But for now it’s likely she’ll await the next contender at flyweight.

We have an idea what the future looks like for both Volkanovski and Shevchenko. But what about the one and only Nick Diaz? I wrote Saturday night that I thought Diaz looked fine in a third-round TKO loss to Robbie Lawler, arguably better than expected. However, I’m just not sure I want to see Diaz fight again. He was noticeably slower at middleweight, and at the age of 38. Brett, what were your thoughts on Diaz’s performance against Lawler? Are you into the idea of another Diaz fight in the UFC?

Okamoto: I had mixed emotions, Marc. On one hand, Diaz was out for six years and explicitly told us beforehand he really didn’t want to fight on Saturday. On the other hand, once the fight started, I saw skill. I saw a guy who can still be competitive in appropriate fights in the UFC. I talked afterwards to a few people from his camp, who told me he had a smile on his face and he’ll likely do this again. If we do see Diaz fight again, it would be best if we see him again soon. I saw a guy on Saturday who, if he fights again in the next six months, would probably look better than he did. But the matchmaking is key. If he’s paired with the right opponent, I support seeing Diaz fight again.

Wagenheim: You nailed it, Brett, it’s all about the matchmaking. And related to that, it’s about Diaz recognizing where he stands in his life. He did a great job of demonstrating that awareness at the end of Saturday’s fight, which to some fans might have felt anticlimactic. To me it was a gratifying sign that Nick knew he had given every damn ounce of what he had to give and the fight was over. In the leadup, though, remember when Diaz was saying that whoever matched him with Lawler was an “idiot” and that he should have been in with Kamaru Usman? Can you imagine?

I’d love to see Diaz compete again in an appropriate fight, but I fear the worst. I hope the UFC doesn’t allow some young tough to make his name off Diaz. And I’m even more apprehensive — in a time when people are paying to watch YouTubers fight, when MMA guys are “boxing” and aged legends like Evander Holyfield are making us sad — that we could be in for a Diaz spectacle.

Raimondi: I agree with both of you that Diaz absolutely can still fight against appropriate opponents. The question I have is, who the heck is that? Is it a middleweight? A welterweight moving up? I have no interest in seeing Diaz against a star near his prime, like Jorge Masvidal, or some young, hungry monster like Khamzat Chimaev. But the UFC isn’t exactly the place to be if you’re looking for favorable matchups. It’s sink or swim around these parts. That is where my concern lies. So, Brett, what does Diaz’s next fight even look like?

Okamoto: In my column the other night, I threw out the idea of Ben Askren, which should give you an indication of where I’m at with Diaz matchmaking. Sure, Askren is retired. But up until last weekend, Diaz was basically retired, too. I think Askren could be fun, sell the fight, and not represent a super dangerous opponent who would cause a lot of damage against Diaz.

Raimondi: I like where your head is at with the Askren idea, Brett. I’ll throw a name out there, too, though he also isn’t on the UFC roster anymore: Demian Maia. I wouldn’t hate that bout at middleweight. Two legends.

Wagenheim: I have no other names to toss out — unless we’re talking about fighters who should not be matched with Diaz, in which case I could recite most of the UFC roster. That’s not a knock on Diaz. Six and a half years is a long time to be away, especially at 38 years old. Maybe there’s one last magic act left in the king of the 209. I’ll be watching, for sure. Maybe holding my breath, though.

Raimondi: Speaking of holding our breath, there’s someone else I want to address with the both of you: Jon Jones. We know, of course, that he was arrested Friday in Las Vegas on charges of tampering with a vehicle, a felony, and misdemeanor battery domestic violence. This came just hours after he was at a ceremony where his legendary 2013 fight with Alexander Gustafsson was inducted into the UFC Hall of Fame. What does the UFC even do with Jones at this point? He’s had umpteen chances. Could you imagine if Jones was UFC champion when this occurred?

Jon Jones expects to return to the UFC in the second quarter of 2022 and would like to face the winner of Francis Ngannou vs. Ciryl Gane.

Okamoto: It’s a good question, but also an irrelevant one. The UFC doesn’t have a whole lot of say in Jon Jones’ career right now. With his arrest, Jones’ eligibility to fight really isn’t up to the UFC. Before all of this happened, I thought Jones would fight at heavyweight twice in 2022. And I think despite the current circumstances, that’s still a possibility. In a weird sense, we are at where we always are with Jones. He’s talented, maybe the best fighter in the world. But his personal life might derail all of that.

Jones’ 2022 was always going to be super interesting, but now it’s interesting for different reasons. Which is unfortunate. Bottom line, though: If I had to guess whether Jon Jones fights for the UFC heavyweight title in 2022, I’d say yes, as of this moment, I think he does.

Wagenheim: To me, the idea of Jones fighting for the heavyweight title anytime soon, in light of this latest arrest, is troubling and unthinkable, which is why I would not be shocked to see it happen. MMA is a pageant of troubling and unthinkable twists, isn’t it? I mean, a year ago we thought it was a sure thing that “Bones” would be challenging for the belt, and look where we are now.

Speaking only to Jones’ fight career, perhaps this latest brush with the law will ease the contractual stalemate between him and the UFC, because whatever leverage he might have thought he had is all gone. So if he doesn’t put MMA on pause altogether in order to get his life together — that would be my suggested next step for him — and the legal system allows Jones to get back to fighting, he might just take whatever bout he’s given and do it at the UFC’s price. And if the heavyweight Jon Jones performs like the light heavyweight Jon Jones did, there’s no ceiling for the guy. But then again, no floor too slippery, either.

Raimondi: I am not sure how much this slows Jones down. I spoke to several Las Vegas attorneys over the last few days and, just based on the charges alone, they’re fairly certain Jones won’t be doing any kind of lengthy jail time.

Now we know at least a little more about what happened Thursday night and early Friday morning — and it’s far from a good look for Jones. It makes me a tad uncomfortable talking about Jones’ athletic career when he’s being accused of domestic violence. That is the reality we are in, though, and people are invested in Jones as one of the greatest fighters in the history of the sport, if not the greatest.

Is there a way Jones can turn his life around? I know he keeps saying he’s doing better, but these poor decisions are piling up.

Okamoto: This is a question we’ve been answering for the better part of the last decade. Jones has, thus far, managed to come away from these personal issues and still continue his career. And at the end of the day, I suspect he’ll do so here. Just in terms of his career inside the Octagon, I imagine Jones will still fight down the road and he still has a good shot at becoming a heavyweight champion. His outlook in the Octagon is the same, as long as he remains eligible to compete.

His legacy is already a complicated one. But an incident like this, it will follow him. It definitely becomes part of the bigger story of Jon Jones. It has been and continues to be very sad that arguably the best fighter this sport has ever produced can’t seem to conquer his own demons. Like so many of you, I want to see Jones compete and I want him to be a part of the UFC, but some of the alleged details of this case are disturbing and his priority clearly needs to be his personal life right now and not any UFC title.

Wagenheim: Jones’ legacy as a fighter is not what’s important. His legacy as a man is in tatters, and the greatest thing he could do for himself right now is devote every ounce of energy to growing up. Over the years, we’ve all heard him address his troubles and talk about bettering himself as a person. He speaks with the best of intentions. And then, again and again, he has shown himself to be incapable of sustaining that goodheartedness.

Jones clearly cannot clean up his act all by himself. It’s time for him to surround himself with people who will hold him to a higher standard. If the latest allegations are true, it will be more difficult than ever to get behind Jones. But in his ongoing battle with his worst tendencies, I will be rooting for him — not for Jon Jones the mixed martial artist, not for the good of a sport that misses its greatest fighter or for the UFC’s coffers, but for the man’s family, which has suffered through enough.