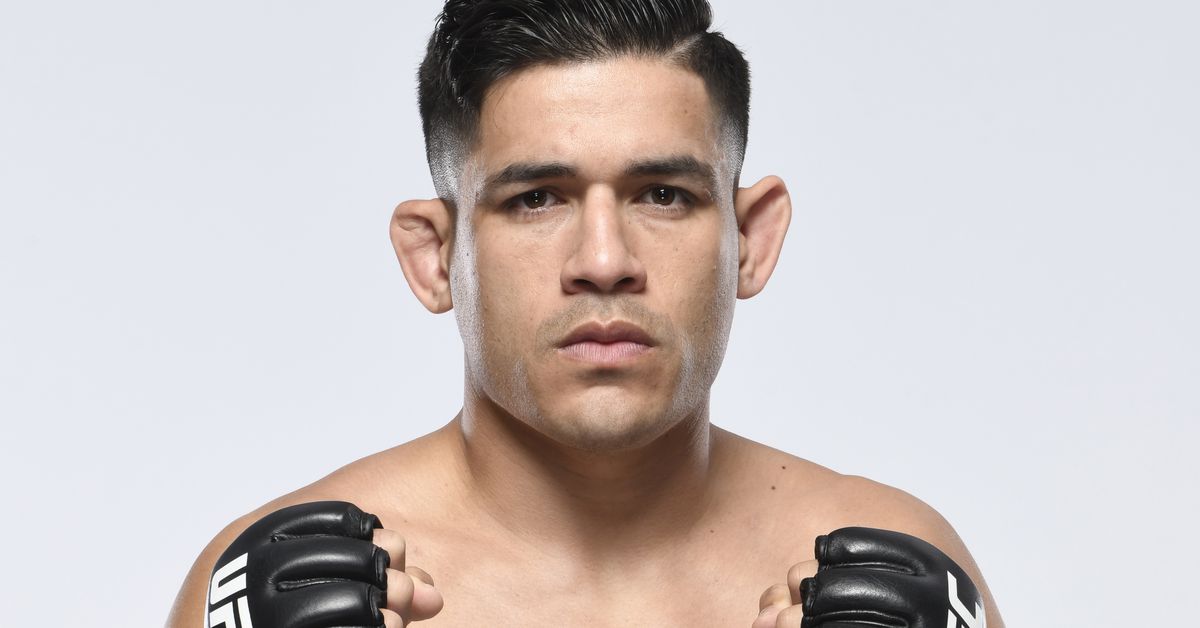 After weeks of last-minute disasters, UFC Vegas 38 will hit the finish line this weekend (Sat., Oct. 2, 2021) with only a handful of cancelations, one of which gives a newcomer his shot at the big time. On this edition of “New Blood,” the series increasingly dominated by “Contender Series” veterans, we look at a Lightweight knockout artist training under a familiar face.

Breeden — another James Krause acolyte out of Glory MMA & Fitness — rode a three-fight knockout streak into a “Contender Series” bout with Anthony Romero. Though he fell short despite a late surge, he’s since returned to the win column with a pair of victories under the Fighting Alliance Championship banner.

He replaces Leonardo Santos, who ran into visa issues, on just over a week’s notice.

Breeden’s style could best be described as a slow-building avalanche. He utilizes the sort of marching/shifting boxing attack that Dmitry Pirog used to score one of my favorite knockouts ever, often throwing the same hand multiple times in a row to set up his offense. Until he settles in, he’s largely content to push forward with this style and sprinkle in leg kicks.

Once he gets inside, however, it’s all about seek-and-destroy. Breeden’s got a vicious body attack that he mixes nicely with his head shots, bolstered by a rock-solid chin and extreme grit. I was unable to find footage of his one knockout defeat, but it must have been one hell of a shot considering the sorts of heavy blows I’ve seen him walk through. He’s also got a secret weapon in his step-in knee, which wiped out recent Octagon signee Brandon Jenkins and visibly stung Romero.

Perhaps his greatest skill, however, is his ridiculous takedown defense. Breeden is absurdly difficult to take and hold down — Romero couldn’t even get close to dragging him down despite both of Breeden’s legs being compromised from leg kicks. Between his durability and that counter-wrestling, stopping Breeden’s advance is a nightmare and a half.

You can, however, work around it. Romero used a combination of fast lateral movement and vicious low kicks to steer clear of those punches and badly hobble “Money’s” footwork, and recent efforts suggest he hasn’t gotten around to checking those sorts of kicks yet. He also tends to throw his own low kicks from too close without setting them up, opening him up to return fire, and appears vulnerable to straight punches due to a lack of upper-body and head movement.

I’m also not certain whether he just starts slow or doesn’t feel comfortable pushing the issue against mobile opponents until he gets momentum going. He didn’t commit to an all-out assault on Romero until he was down to about half a leg in the third round, meaning he may be unable to compensate for his defensive lapses with raw pressure.

Still, Breeden’s skilled, tough as nails, and extremely entertaining. And while he may not crack the Top 15, he should have a fun tenure among the middle of the pack.

Opponent: He takes on the skilled, but inconsistent, Alexander Hernandez, who went from looking like a million bucks against Chris Gruetzemacher to struggling mightily with Thiago Moises’ striking. While Hernandez does tend to fall short against better competition and would be 1-4 in his last five if the judges were competent, he should be able to keep Breeden on the back foot and neuter his offense. It’s far closer than the lopsided odds would suggest, but I’ve got “The Great” by decision.

Tape: His FAC and “Contender Series” bouts are on Fight Pass.

Remember that MMAmania.com will deliver LIVE round-by-round, blow-by-blow coverage of the entire UFC Vegas 38 fight card right here, starting with the ESPN+ “Prelims” matches, which are scheduled to begin at 4 p.m. ET, then the remaining main card balance on ESPN+ at 7 p.m. ET.

To check out the latest and greatest UFC Vegas 38: “Santos vs. Walker” news and notes be sure to hit up our comprehensive event archive right here.