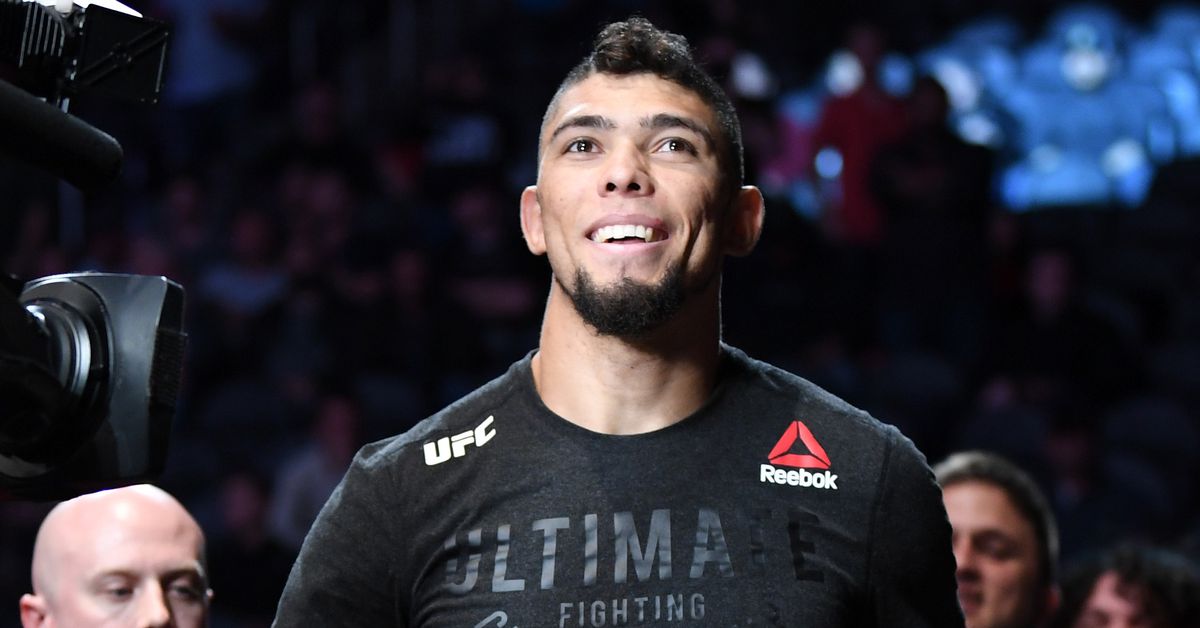 The main event this evening is likely to end up a competition of who can do the craziest thing without getting knocked out in the process. On one hand, we have Santos, the human hammer who rotates fight-to-fight from tactical range kicker to barbarian trying to tenderize his meat with a wooden club. Then, there’s Walker, who is equally as likely to land a flying knee as he is to be dazed by a glancing blow and once injured himself doing the worm following a knockout win.

Someone is almost certainly going to sleep in an unpleasant manner. Let’s take a closer look at the keys to victory for each man:

Fifteen of his wins come via knockout.

In this bout, Walker should look to stalk Santos. He’s one of the rare men who has the kicking prowess to keep up with Santos at distance, but still, trading kicks with “Marreta” sounds awful. Instead, Walker should be looking to take advantage of a historical Santos’ weakness: defense along the fence.

In general, Walker does really great work with his feints. If he can cut off the Octagon and trap Santos, his opponent will already be a bit uncomfortable. Add in Walker’s unorthodox movement and feints, and there’s a real chance Santos’ freezes up for a moment or lunges into something obvious — just the opportunity Walker needs for a highlight-reel knockout.

Like Walker, Santos has also stopped 15 foes via strikes.

Santos’ long-standing problem has been that he struggles to balance his aggression and technique. At times, Santos will hang back and remain too patient in an extremely close fight (like in his recent loss to Rakic). In other bouts (numerous), Santos has thrown away potential victories by going absolutely bonkers in pursuit of big shots.

While there’s always a chance it backfires, this seems like the match up to swing big.

It is becoming fairly clear that Walker is not the most durable fighter; he’s been at least wobbled in all of his UFC fights that have made it passed the two minute mark. Santos, meanwhile, carried a similar reputation at 185 lbs., but he’s been rock solid since jumping up to Light Heavyweight.

To explain the strategy simply, it does not appear that Walker could survive long in a wild brawl like the one Santos threw at Jimi Manuwa a few fights ago. Santos is better off immediately introducing chaos and trusting himself than trying to poke-and-prod at Walker, who again is quite good at lining up single shot finishes.

One of these exciting Light Heavyweights is back in the mix.

There was a moment where Johnny Walker was the talk of the town, hyped up as the potential Jon Jones dethroner after his quick trio of knockout wins. Of course, Corey Anderson put a stop to all that, but people want Walker to succeed! He’s talented, fun, and still young. If the Top 10-ranked Brazilian can start a new win streak in impressive fashion here opposite a former title challenger, expect another high-profile fight next.

Santos, alternatively, is 35 years old and looking for the first victory since his knee exploded in the Jones bout. Again, his performances in his last two bouts haven’t been bad necessarily; small adjustments could have resulted in victory vs. both Teixeira and Rakic. Still, if he’s to remain a top-ranked contender and title threat — and seeing as he’s the last man to defeat the current champion, now is the time — Santos absolutely must return to the win column in this fight.

At UFC Vegas 38, Johnny Walker and Thiago Santos will go to war in the main event. Which man remains standing when the dust settles?

Remember that MMAmania.com will deliver LIVE round-by-round, blow-by-blow coverage of the entire UFC Vegas 38 fight card right here, starting with the ESPN+ “Prelims” matches, which are scheduled to begin at 4 p.m. ET, then the remaining main card balance on ESPN+ at 7 p.m. ET.

To check out the latest and greatest UFC Vegas 38: “Santos vs. Walker” news and notes be sure to hit up our comprehensive event archive right here.