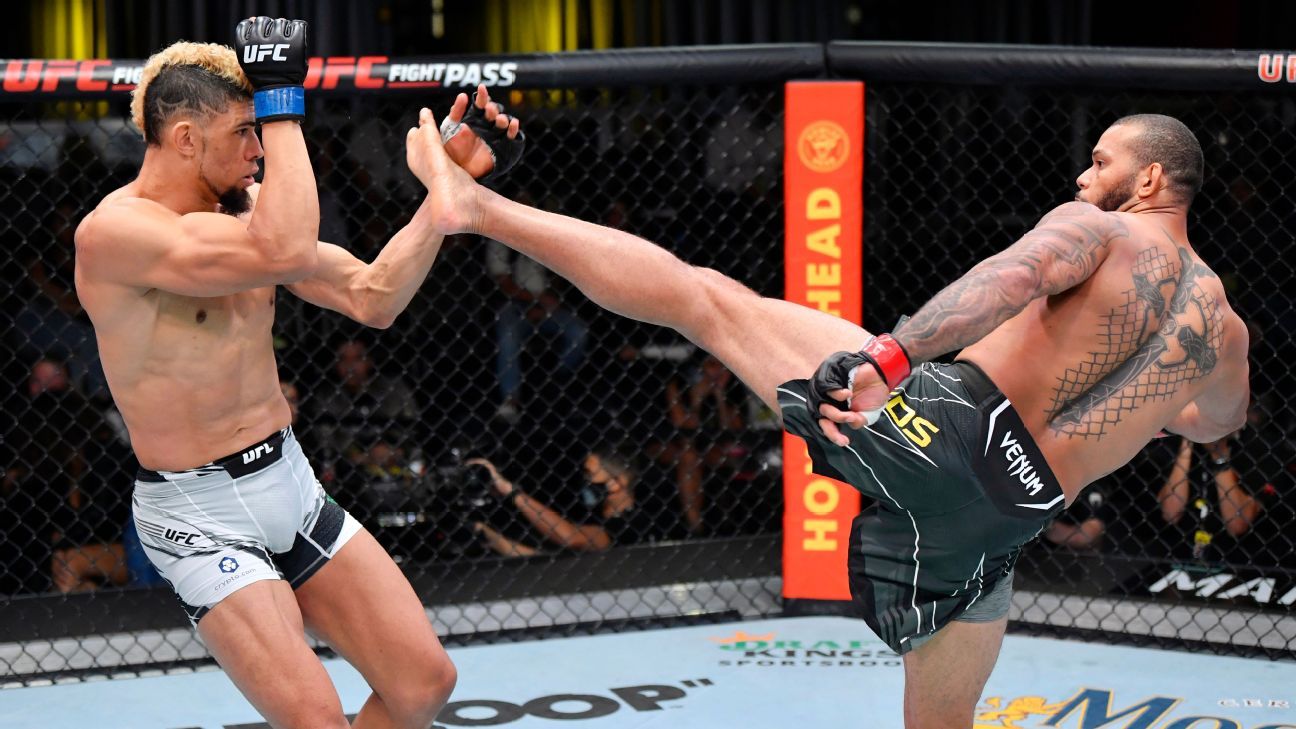 A bout that was promoted as being a sure bet to produce fireworks ended up being a dud.

Thiago Santos edged Johnny Walker via unanimous decision (48-47, 48-47, 48-47) in the main event of UFC Fight Night on Saturday in Las Vegas. The fight featured two of the most explosive knockout artists in the UFC light heavyweight division, but it never got out of first gear. A big overhand left from Santos in the fifth round likely sealed the victory in the close, albeit lackluster, contest.

Santos to win by decision was +650, according to the Caesars Sportsbook. Neither man landed more than 11 significant strikes in a single round.

“I tried to do my best,” Santos said in his postfight news conference. “I tried to knock him out, but it’s hard to get close to him. He’s big, but he moves fast.”

ESPN has Santos ranked No. 10 in the world at light heavyweight and Walker was trying to ascend the ladder. Both men were born in Brazil, but live and train elsewhere. Santos competes out of Florida’s American Top Team and Walker trains at Dublin’s SBG Ireland, the home gym of Conor McGregor.

Santos said in his postfight interview on ESPN+ that he would next like to face top Czech Republic light heavyweight Jiri Prochazka.

Walker held a 4-inch height and 6-inch reach advantage, so it made it hard for the smaller Santos to get inside where he’s so effective with his hard hooks. But Walker also wasn’t very active offensively. The best techniques of the fight were Santos’ kicks to the legs and body of Walker.

Walker had a solid first round with leg kicks, keeping Santos at bay. Santos landed some hard kicks to the body and legs of Walker in the second round. In the third, Santos had his best head shot to that point, a left that wobbled Walker off a Walker kick. Walker got back some momentum in the fourth round with some kicks and a right hand, his best punch of the night.

Santos, though, cemented the win in the fifth. He landed two hard left hands and big body kick. Walker didn’t show much urgency down the stretch and the bout went to a decision.

Santos (22-9) came in tied for the second most KO/TKOs in UFC history with 11. “Marreta” snapped a three-fight losing streak with the victory. One of those losses came against then-champion Jon Jones in a 2019 UFC light heavyweight title fight in which Santos blew out both of his knees. Santos, 37, earned his first win Saturday since that surgery. He was coming off a unanimous decision loss to Aleksandar Rakic at UFC 259 in March.

“I come from a tough injury on my knees,” he said in his postfight interview. “It’s so tough to recover. … I was sure this fight I was going to do 100% better than my last fights. And I did. I’m going up, not down.”

Walker (18-6) was coming off a huge first-round knockout over Ryan Spann in September 2020. This was only the third time he’s been to a decision in his pro career. He has won all four of his UFC bouts via finish. Walker, 29, was considered an outstanding prospect before back-to-back losses to Corey Anderson and Nikita Krylov in 2019 and 2020. Now, he has lost three of his past four.

Pound-For-Pound No.1 is on the line in Perth! 😤
Bellator 290 Ceremonial Weigh-in: Ryan Bader vs. Fedor Emelianenko
Scott Coker has no regrets about Fedor’s legendary career – almost
Ryan Bader stops Fedor Emelianenko in the first at Bellator 290
Alexander Volkanovski Reacts To Khabib’s UFC 284 Absence