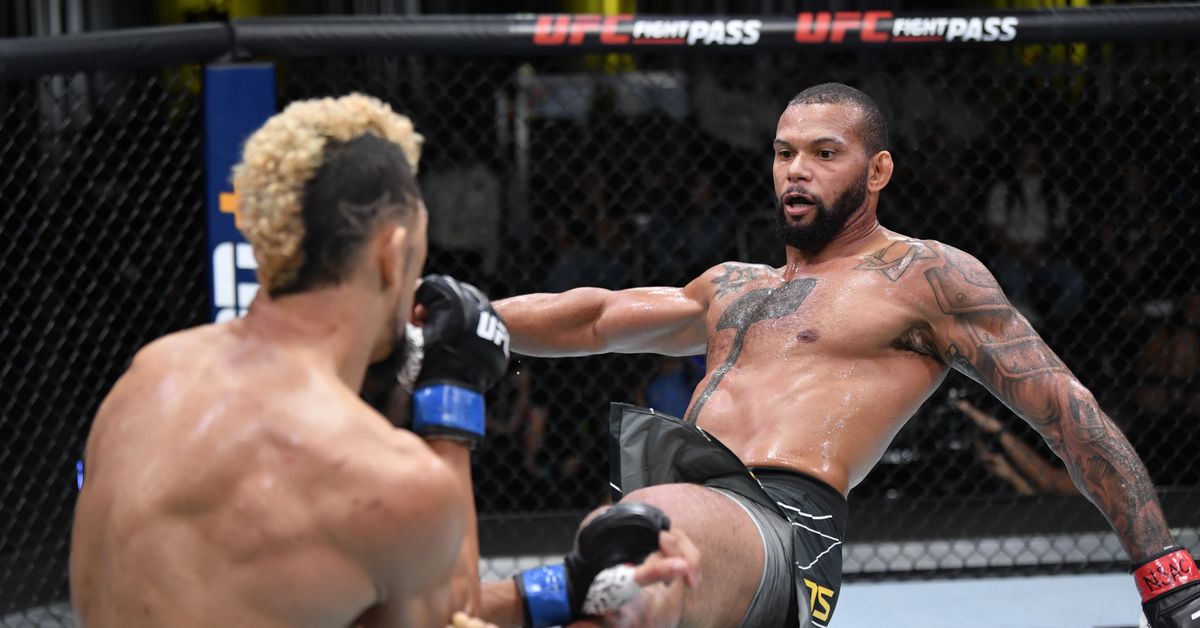 One-time UFC light heavyweight title challenger Thiago Santos would love it if UFC 267 backup Jiri Prochazka decided to fight him. But he still hasn’t gotten the bitter taste out of his mouth from a loss to Aleksander Rakic.

During a post-win interview on the ESPN+ post-fight show for UFC Vegas 38, Santos said Rakic shouldn’t get any title opportunities with the performances he’s delivered thus far.

“I don’t think Rakic deserves this fight,” Santos said after outpointing Johnny Walker. “His fight is boring. I didn’t have time to say [it] in the octagon. His fight is boring. He talks sh*t about me, says it was an easy fight against me. He’s lying. I won that fight.

“And I know if he’s going to fight against Anthony Smith, Anthony Smith is going to beat him. I’m sure. He doesn’t deserve it. His fights are always boring. He made me fight boring. I don’t like him.”

Rakic, who outpointed Santos in his previous performance, accepted a callout from the recently victorious Smith. So far, the matchup has not been confirmed by the UFC.

Prochazka will cut weight and be on site when light heavyweight champ Jan Blachowicz defends his belt in a UFC 267 headliner against Glover Teixeira. If there are no hiccups, the Czech fighter will have the choice of waiting for the winner to heal up or taking another fight.

Santos knows he needs to do some work to get back to a title shot after a trio of losses that started with a failed bid for now-former champ Jon Jones’ belt, a fight where he severely injured his left knee. Getting back into the win column was Santos’ first priority on Saturday against Walker.

“I needed to defend my position in the ranking,” he said. “In the last fight against Rakic, I touched him more. Everything I won. He just dominated the cage, and he won the fight, so I didn’t want that to happen again.”

Walker and Santos are known for their knockout performances, but both turned in measured attacks that led to a lackluster 25-minute meeting in the headliner of Saturday’s fight card at UFC APEX.

Although he sported ice packs for his knees, Santos said he was in good health after the long fight.

“Yeah, I don’t remember any fight that I don’t finish easy,” he said. “When I entered there, I didn’t care. When I stay inside the octagon, I don’t care about my body. I go to fight.”

The measured pace of the fight and close action left questions about who won the matchup after 25 minutes. But for Santos, he never questioned he was ahead.

“In my eyes, I dominated him,” he said. “I kicked him so strong, and sometimes, I connected with my hand, so I felt I dominated him all the rounds, but we never know. I was a little bit sharper, because he was unpredictable, and it was hard to find sparring to train for him.”

Now that one hurdle has been cleared, Santos can get back to fighting top-ranked opponents. Rakic might not deserve it in his eyes, but Prochazka certainly does.

“I would like to fight against him,” he said.

Terrance McKinney wants Paddy Pimblett fight, but two legends also come to mind for next matchup
On three-fight skid, Augusto Sakai wants to knock out Sergey Spivak at UFC Vegas 59 and ‘remove the jinx once for all’
Khamzat Chimaev is not the fight Nate Diaz’ coach wanted
Henry Cejudo picks Valentina Shevchenko if Amanda Nunes trilogy happens
Adesanya to defend title vs. Pereira at UFC 281