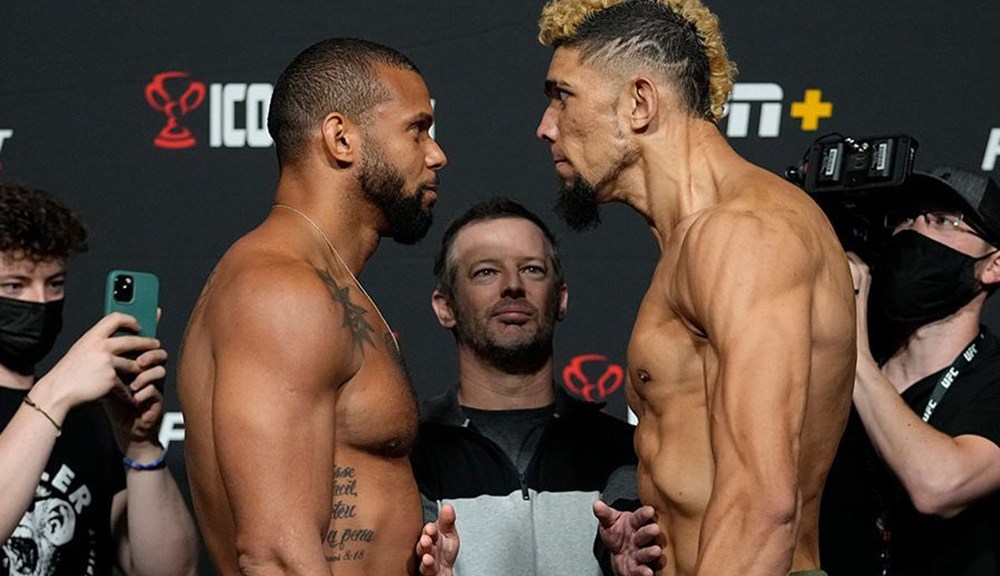 Follow along with our round-by-round updates and official results beginning at approximately 4 p.m. ET for the prelims on ESPN+ and 7 p.m. ET for the main card on ESPN+.

To discuss the show, be sure to check out our UFC Fight Night 193 discussion thread. You can also get behind-the-scenes coverage and other event notes from on-site reporter Ken Hathaway (@kenshathaway) on Twitter.

Enjoy the fights, everyone.

Round 1 – We’re off. The action has begun, marking Johnny Eduardo’s first competition in over three years. He’s getting up there in age. Let’s see how he looks. The two fighters touch gloves. That’s surprising to see, considering the animosity shown at yesterday’s weigh-ins. Perez lands a leg kick and a jab to the body. Eduardo tries a kick and punch of his own, but both whiff. Both fighters miss. Perez jabs, and jabs again. A looping overhand right from Eduardo misses but he follows it up with another punch that connects. Eduardo pelts Perez’s lead leg with an outside kick – and another. Eduardo lands a body punch. He switches stances and rips Perez’s body with a kick. Both fighters sling in the pocket. Looks like Eduardo landed the better shots. Perez looked briefly stunned. Head movement galore for Perez, who rocks his body funkily back-and-forth in an exaggerated motion – a taunt, perhaps. Weird visual, regardless. Perez checks a kick but eats a straight jab from Eduardo. An outside leg kick lands for Perez, which he follows with a punch to the head of Eduardo. A spinning backfist misses for Perez before the round ends. Eduardo looked good in his first round in years. 10-9 Eduardo.

Round 2 – The fighters exchange leg kicks, picking up where they left off in Round 1. Coming out of the corner, Eduardo’s left eye looked busted. Now it looks even more swollen. That’s certainly something to watch. Perez gets aggressive but Eduardo calms the pace with a spinning back kick to the chest. Perez jabs the body again. Eduardo catches a lazy Perez knee and takes him to the canvas. In Perez’s guard, Eduardo scoots over to the fence and lands an elbow. Perez tries to scramble up but Eduardo is too strong on top. Perez rolls to his side and explodes to his feet against the fence. He eats a few shots but ultimately gets away from Eduardo. Bombs are slung by Perez. He’s throwing everything he has but is missing. Perez shoots for a takedown of his own and gets it. Eduardo briefly threatens a submission off his back but returns to guard. Perez rises to his feet and lands a hard ground-and-pound shot to Eduardo’s head. Eduardo scrambles for a leg but Perez threatens a guillotine. Eduardo rolls to his back. The sequence repeats and Perez lands in side control. Eduardo is very leery of Perez’s guillotine threats. From side control, Perez isolates an arm – and gets the tap! Wow. That’s an unusual one – a straight armbar. He took Eduardo’s left arm, stuck it between his own legs and grabbed hold of Eduardo’s neck – and cranked. That looked painful. Anyway, Perez wins by submission.

Round 1 – Both fighters are super patient here early on. Young throws a pair of slow left hands that miss. Egger catches a Young kick, but isn’t able to get the takedown against the fence. Young breaks free and the two fighters circle out. Egger feeds Young a one-two combination. A few moments later, the two fighters tie-up and hit the mat in a 50-50 position. Young is working for a leg submission but Egger follows the ankle and escapes away from a heel hook. After a brief struggle for position, Egger ends up in half guard where she lands ground-and-pound. Egger moves to side control and then the crucifix. She’s landing ground-and-pound, which isn’t the heaviest but is amounting to damage. The round ends with Egger on top. 10-9 Egger.

Round 2 – Young misses on a combination. Egger fires back but also misses. A lone right hand from Egger glances Young, who answers with one of her own. Young pressures Egger against the fence after a short combination. Egger swiftly reverses position with a judo throw. Wow, that was beautiful – and it put her in a very advantageous position of side control. Young tries to push off the fence, but Egger catches her and they end up in the same position. Egger pummels away with some ground-and-pound but gives up position to Young, who returns to guard. A heavy Egger elbow thuds on the head of Young. Referee Mark Smith didn’t like Young’s response (or lack thereof) and waves off the fight. That was an odd stoppage. Young did cover up and turn away but it was a lone shot – and a delay from the referee. Regardless, the fight’s over. Egger wins for the first time in her UFC career.

Round 1 – Pirrello lands a heavy outside leg kick. The two shadowbox for a bit before de Andrade explodes with a combination that lands. De Andrade cliches Pirrello against the fence before the two break. De Andrade lands a leg kick of his own. Pirrello winds up for a left high kick and eats a short left hand that sweeps him completely off his feet. He’s unconscious! De Andrade lands a follow-up shot and that’s it. What a knockout! Pirrello went out stiff. De Andrade celebrates with not one, but two, backflips off the cage! That should be $50,000 right there.

Round 1 – A touch and gloves and we’re off. This could be a banger, folks. Both fighters are throwing hard early. Smith lands a jab and then ducks under Mullarkey’s one-two combination. Mullarkey stalks Smith and lands a hard outside leg kick. Mullarkey tags Smith, who answers with a rocking shot. Mullarkey is stunned but just for a second as he knocks smith over. Smith pops up. It was just a shove while he was off-balance, but it bought Mullarkey the time he needed to recover. A slick Smith combination ends with a thudding knee to the forehead of Mullarkey. That was very audible – a thud. Mullarkey retreats and is bleeding but relatively OK, it seems. Mullarkey lands an inside leg kick. The two fighters tie up and Mullarkey briefly drags Smith to the mat. The round ends with Mullarkey elbowing Smith against the fence. Fun round. 10-9 Smith.

Round 2 – Mullarkey steps in a thrashing leg kick. Smith looks immobilized. I’m not sure if that just stung or shut off some nerves, but Smith definitely looked hobbled. He seems to be moving better on it now. Mullarkey continues to go back to the leg kick, but is being really smart with it. He’s not throwing it often enough where Smith can anticipate it, but continues to chip away from time to time. Mullarkey lands a punch that seemed to bother Smith’s eye. Mullarkey charges forward and unloads on Smith. Oh man, Smith is turning into a punching bag – or a kneeing bag – or an elbowing bag. Mullarkey is unloading. Smith drops after a body shot and Mullarkey follows him down. Mullarkey pummels away as Smith covers up – and that’s it. Dan Miragliotta has seen enough and waves off the fight.

Round 1 – Correia is totally overwhelmed with emotion as she walks out to David Guetta and Sia’s “Titanium.” This will be her final fight. Rosa looks to play the spoiler. Rosa lands the first hard combination of the fight as the two clinch early on. She clearly looks like the faster fighter already. Correia jabs and jabs, but they miss. Rosa grabs hold of the thai clinch and throws knees followed by a leg kick. Correia looks a bit stumped. She was aggressive initially but isn’t throwing much of anything now. Rosa lands a combination as she marches forward. Rosa shoots for a takedown and shoves Correia against the fence. Correia successfully defends. The round ends. Clear 10-9 Rosa.

Round 2 – A hard Rosa knee connects early on Correia. That one hurt. Rosa lands a one-two combination. Correia continues to be in her slump of inactivity. Rosa’s combination frequency is increasing – as is the number of strikes she’s throwing at a time. Correia looks tired. She retreats as Rosa peppers her with strikes. The two clinch against the cage with Rosa leaning on Correia. A lot of cage-squishing going on. Tick tock. With about a minute left in the fight, Correia shoves Rosa off and lands a combination. Rosa lands an overhand right and a leg kick. Correia pumps a jab and misses on a left hand. She looks slower than before. Another big step-in knee connects for Rosa. She’s going for the kill but the clock is nearing zero. Another jump knee lands. The round ends. 20-18 Rosa.

Ranking the UFC 284 fights: There’s no debating which fight is No. 1
Neiman Gracie determined to snap skid, get back to title contention at Bellator 290
Midnight Mania! One Win Away From A Title Shot?
The CALL-OUT that started it all! 😬
UFC 284 free fight video: Alexander Volkanovski settles Max Holloway trilogy in dominant fashion