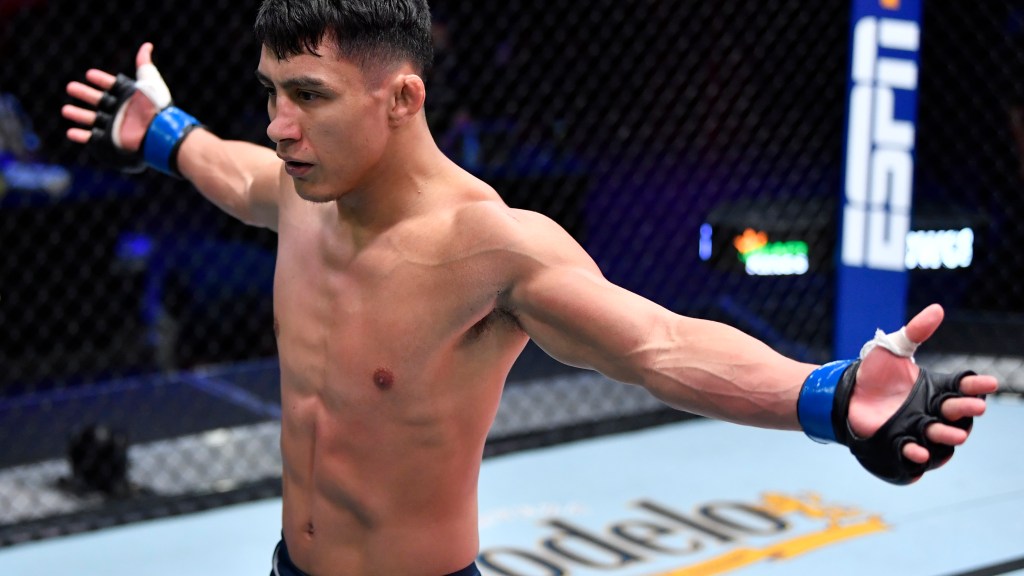 LAS VEGAS – MMA Junkie was on scene and reporting live from Tuesday’s Dana White’s Contender Series 42 event, where four more fighters secured a UFC contract, and one athletes was invited to a future episode of “Dana White’s Looking’ for a Fight.”

#DWCS 42 is now live on @ESPNPlus, and it kicks off in the lightweight division with Patrik White (@PrimetimePatrik) vs. Genaro Valdez.

The two fighters sprinted to the center of the cage at the opening bell and immediately started teeing off in the pocket before Valdez moved inside and looked to bring the fight to the floor. White did briefly hit the canvas but popped quickly back to his feet. Unfortunately for him, Valdez was relentless with his efforts and scored another takedown before briefly switching to the back. White alertly pulled him away and looked to continue trading, while Valdez quickly looked for the takedown once again.

As the round unfolded, the two continued teeing off on the feet before Valdez was able to bring the action to the canvas once again. He immediately started landing big shots from the top before White swept to the dominant spot. The wild scramble then moved back to the feet, where the two just continued dropping bombs in the pocket. It was clear both men were exhausted, but the action was so constant, referee Herb Dean couldn’t find a moment to return White’s mouthpiece, which he lost with nearly two minutes remaining.

White moved forward quickly forward at the start of the second, as well, and the two just went right back to trading. Valdez’s face was bettered and bleeding, but he refused to back down, and he dug deep to land a few huge shots that again dislodged White’s mouthpiece but this time sent him crashing to the canvas. Valdez continued punching on the floor, and Dean had no choice but to stop the assault at the 44-second mark of the second round.

The undefeated Valdez was given a UFC contract for his effort.

That’s a perfect 🔟-0 for Genaro Valdez

[ #DWCS is LIVE on @ESPNPlus ] pic.twitter.com/IzSRHXVxLe

#DWCS 42 is off to a wild start!! The action continues now at middleweight, with Shonte Barnes vs. Joseph Holmes.

In middleweight action, Joseph Holmes (6-1) was able to score a second-round submission win over Shonte Barnes (6-2-1).

It was Barnes that opened the fight with a snapping low kick, but both men soon settled into a rhythm and were patient with their attacks. Kicks were the preferred option for both men early, before a brief clash of heads dropped Barnes to a knee. An alert Chris Tognoni called an immediate pause to evaluate the fighters, and the action carried on shortly after.

The taller Holmes stayed at range to start the second, but Barnes had no issue pressing forward and looking to engage with heavy punches. Holmes was eventually able to grab a clinch again, driving the action tot he canvas and moving quickly to the back. Once there, he worked the arm under the chin with relative ease and worked on the squeeze until Barnes was forced to tap to the rear-naked choke at the 2:46 mark of the second round.

Holmes was not given a UFC contract but did receive an invitation to a future episode of “Dana White’s Lookin’ for a Fight.”

Another submission finish for @UglyMan_Joe!

Two fights, two finishes so far at #DWCS 42. Bantamweights will try to keep it going next with Josh Weems (@JoshuaWeemsMMA) vs. Fernie Garcia (@teamfgarcia).

At the start, Weems was the one who pulled the trigger first, landing a few quick punches down the middle and then attacking the legs, as well. It didn’t take long for Garcia to come alive, as well, rifling off big shots in the pocket, and forcing Weems to respect the power coming back his direction. As Garcia gained confidence, he laced in a huge right hand that sent his opponent crashing to the canvas, and he was quick to jump on top and continue the barrage until referee Herb Dean called off the fight at the 2:10 mark of the opening round. The quick win scored Garcia a UFC deal.

The action at #DWCS 42 has been fast and furious. Flyweights will look to keep the streak going, with Daniel Barez (@DanielBarez) vs. Carlos Hernandez.

In a flyweight contest, Carlos Hernandez (7-1) earned a narrow split-decision win over a gritty Daniel Barez (12-5).

As the fight opened, Hernandez showed quick lateral movement as he looked to work from the outside, but Barez was right in his face, pressuring and looking to push the pace. Hernandez responded well, and the two engaged in a few spirited exchanges to start the contest.

As the round unfolded, both men mixed up their strikes well, adding in kicks and attacking to all levels. Hernandez briefly thought takedown, as well, but he had to bail when Barez threatened with a choke on the feet. The two continued exchanging in the standup game until Barez drove forward with an impressive takedown late and then worked to the back, where he locked in a rear-naked choke that he wasn’t able to finish before the bell.

The two fighters were quick to exchange again in the second, and it was Barez who rocked his opponent with a crisp two punch-combination. Barez slipped on a knee immediately after, and that allowed Hernandez to follow to the floor, slipping out of a triangle attempt and then moving to the back in a beautiful scramble shortly after. Barez did his best to stay compact as Hernandez alternated between hunting the choke and bailing out to throw punches.

Barez eventually had to try and escape, and he was able to roll to a seated position. However, he couldn’t get Hernandez off his back and had to remain focused on defense. With one minute left, Barez finally did crawl to his feet, but it was Hernandez who got the best of the striking exchanges. Barez did score a late takedown but wasn’t able to capitalize on the position before the bell.

Hernandez was again busy to open the third, though Barez was answering back with power in his punches, even if it was less frequently. A brief Barez eye poke forced a quick timeout, band bot men seemed energized on the restart. Barez was able to score a takedown, though Hernandez scrambled quickly back to the feet. A second Barez takedown was even more emphatic but also couldn’t keep the action on the canvas.

In the final 90 seconds of the contest, Hernandez pushed forward and looked for his own takedown, but it wasn’t there. He was forced to defend a Barez effort, as well, and then the two proceeded to exchange strikes on the feet. Barez did score a takedown right at the final bell but didn’t seem to establish position before it sounded. In the end, Hernandez was awarded the fight on two judges’ cards, taking home a split-decision win.

Despite the narrow result, Hernandez did earn a UFC deal.

Was that performance enough for a UFC contract?

The featured bout of the night is up now at #DWCS 42, with Shimon Smotritsky vs. Mike Malott (@Michael_Malott) at welterweight.

Malott waved off the glove touch at the start of the contest, and the two went straight to work. Smotritsky landed a few sneaky kicks to start, but Malott was comfortable in the exchanges and looked to engage, as well. As he pushed forward with punches, he was able to drive into Smotritsky and wrap his neck, taking the action to the canvas and squeezing on the guillotine. As Smotritsky tried to work free, Malott rolled to the top and was able to secure a tap in just 39 seconds, as well as a UFC deal.

The guillotine gets it done for @Michael_Malott in the 1️⃣st 💥