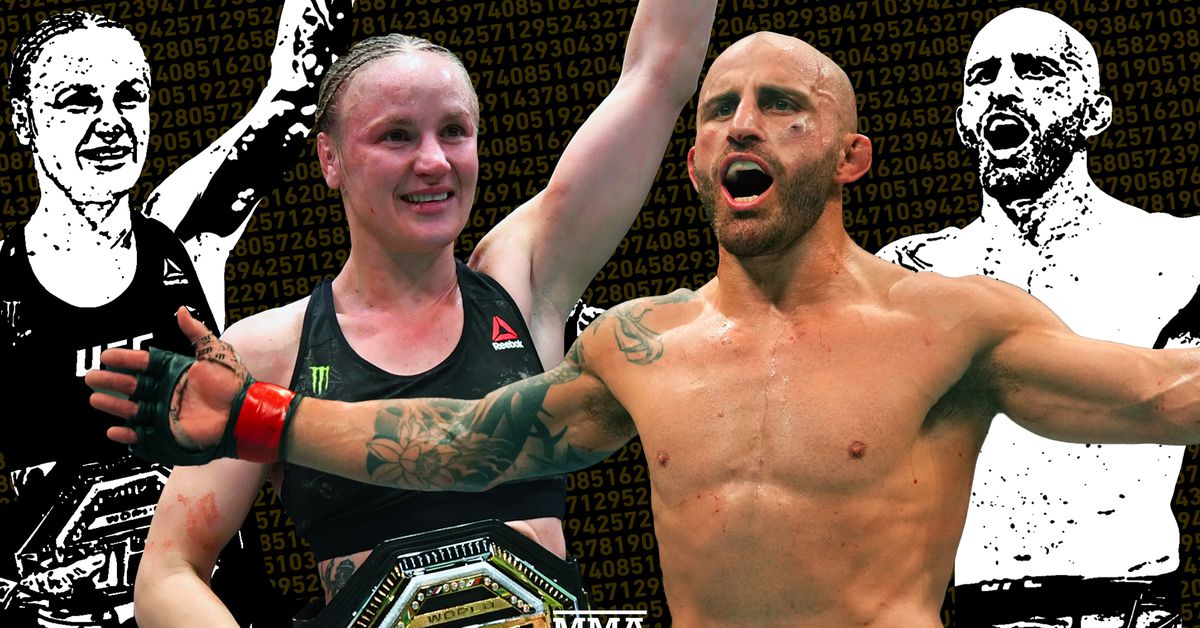 Welcome to the latest update to the MMA Fighting pound-for-pound rankings, where every month our esteemed panel of experts sort through the noise to answer one question: Who are the best overall male and female mixed martial arts fighters in the world?

With September in the rear-view mirror and an intriguing October slate ahead, it’s time to look back at how the last rankings cycle affected the global pound-for-pound landscape in MMA.

(And don’t forget to check out the latest edition of the MMA Fighting Rankings Show!)

Let’s refresh on some ground rules before we dive in.

As a reminder, the notion of pound-for-pound supremacy is always going to inherently be subjective. When you’re debating whether someone like Stipe Miocic should be ranked below someone like Max Holloway, there is no true right answer. So while our MMA Fighting Global Rankings serve an actual functional purpose, the following pound-for-pound lists are just here for a good time. In other words: It’s not serious business, folks.

In case you missed it, last month’s MMA Pound-for-Pound Rankings can be seen here.

Thoughts? Questions? Concerns? Make your voice heard in the comments below.

With one exception, September was another uneventful month for the best male fighters in the world.

That exception of course was UFC featherweight champion Alexander Volkanovski, who defended his title — and his No. 5 ranking — with an absolute gut-check win over Brian Ortega at UFC 266. Volkanovski’s third-round heroics and ability to survive the Ortega squeeze in a manner no other UFC fighter ever has was the stuff of legend, and surely will be on the short list for Fight of the Year once 2021’s year-end award season rolls around.

Volkanovski’s win earned him a few extra points from our eight-person panel but not enough to leapfrog him into the top 4 of the pound-for-pound list, with the quartet of Kamaru Usman, Israel Adesanya, Francis Ngannou, and Dustin Poirier holding firm at the top.

Looking ahead, the rest of the October schedule revolves around just one date and one event: UFC 267 on October 30. The Abu Dhabi card is a rare free pay-per-view offering for U.S. residents (well, free aside from the ESPN+ subscription cost) and features two of the best male talents in the world vying for gold. The feel-good matchup between No. 6-ranked Jan Blachowicz and Glover Teixeira should provide fireworks, and the already messy UFC bantamweight division will get a little messier when No. 16-ranked Petr Yan takes on Cory Sandhagen for an interim UFC strap.

It’s getting harder and harder to deny Valentina Shevchenko.

The reigning UFC flyweight champion headlined a busy month for the women’s half of our pound-for-pound list. All three ranked women to compete in October — Shevchenko, Jessica Andrade, and RIZIN super atomweight champion Ayaka Hamasaki — successfully defended their spots against lower-ranked competition last month. But it was Shevchenko who captured the most headlines.

Following her rout of Lauren Murphy at UFC 266, Shevchenko’s record over the last six years continues to be remarkable: 11-2 in the UFC with six title defenses. The only woman to defeat her, of course, is our pound-for-pound No. 1 Amanda Nunes, who did so twice. But something unusual seems to be happening at the top of the women’s ranks. After Nunes dominated our list with seven first-place votes out of eight since the inception of these rankings, support for “The Bullet” appears to slowly be creeping Shevchenko’s way.

Two members of the eight-person panel defected from Nunes’ side to Shevchenko’s with their No. 1 vote this month, bringing Shevchenko’s total to three first-place votes and putting her just a hair’s breadth away from tying Nunes for the top spot.

Was it a just knee-jerk reaction or a sign of things to come?

Considering how Shevchenko has been talking about a potential trilogy match in recent weeks, we can only hope that something special is indeed brewing atop the women’s ranks if Nunes gets by Julianna Pena at UFC 269.

UFC 278 Embedded, Episode 1: ‘There’s a huge gap between me and them’
Dana White’s Contender’s Series 50: Grading the winners
Vera KOs Cruz in 4th round at UFC San Diego
Bo Nickal Not Upset About UFC Contract Snub: ‘I’m Here To Be No. 1 Pound-For-Pound’
Inspired by Luke Rockhold, Francis Ngannou vents UFC sponorship frustrations: ‘I lost a deal of over a million dollars’