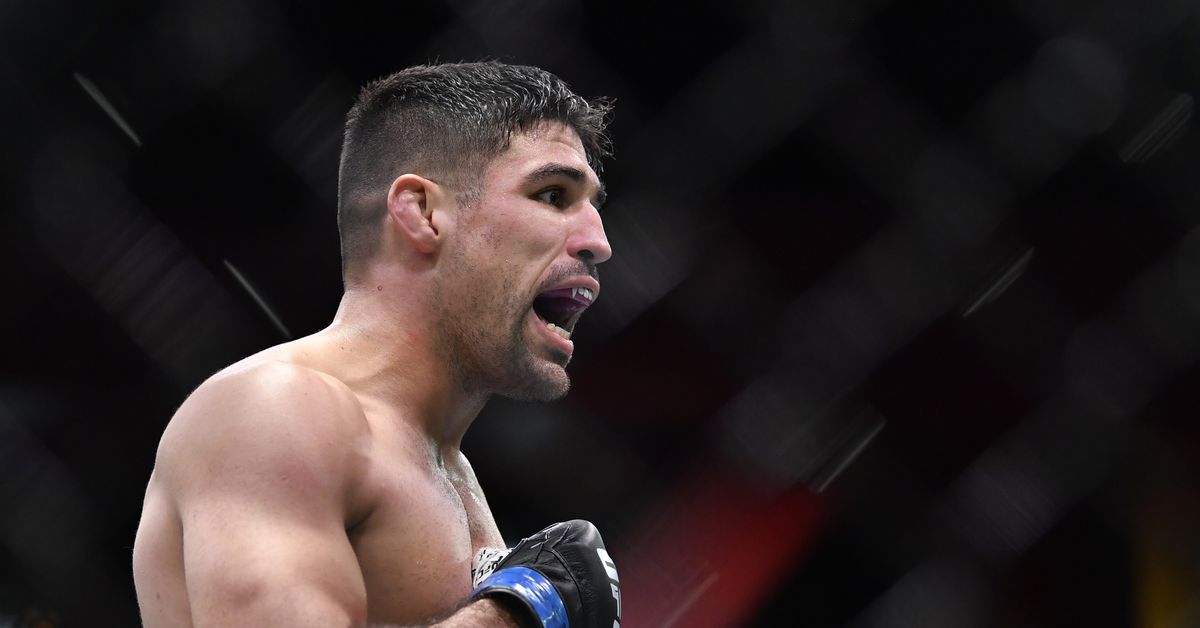 For more than a year now, Vicente Luque has been asking for a fight against Nate Diaz but now he truly believes it’s closer than ever to actually happening.

Known as one of the most excited fighters on the entire UFC roster, while also maintaining a demeanor where he rarely says a bad word about anybody including his opponents, Luque has always admired Diaz, which is why he never classified his request as a call out.

Instead, the veteran welterweight contender would consider it an honor to clash with someone like Diaz and he’s been nothing but respectful while asking for the matchup.

“He’s a great fighter, he’s a legend,” Luque said about Diaz when speaking to MMA Fighting. “Having that on my resume, that’s huge for me. The other thing is he has that status. He is the gangster. He goes in there and he fights and he goes forward and always he will fight till the last second with all the heart he has and I want to go and step in there with a guy like that and show that I can do that and maybe I can do that even better than he does.

“I think it’s about my legacy, about showing what my style is against a tough guy like Nate. Against a guy that has already proved he’s one of the toughest in the sport. That’s what this fight is for me.”

A few weeks ago, Luque’s calls were finally answered when Diaz responded to his message with one of his own that said ‘so let’s fight.’ Now Luque is just waiting on the UFC to say the same thing.

“I’m really interested in this fight,” Luque told MMA Fighting. “I know that Nate is interested as well. So I think it’s the fight to make. We’re waiting. I let my manager Ali [Abdelaziz] [know], he knows that I want that fight. He’s working on it.

“Nate has clearly shown he wants that fight, he wants to make it happen. I think it’s up to the UFC to make it happen, set a date for us and I think it’s a big fight. I’m sure the fans are going to enjoy it. They’re going to want to watch that one. Even though it’s the last month of the year December, we still can catch that Fight of the Year possible contender. I would love to have that fight.”

Currently riding a four-fight win streak including submission victories over former champion Tyron Woodley and Michael Chiesa in consecutive appearances, Luque has put himself into position where a title shot could be looming in the near future.

The only problem is reigning champion Kamaru Usman is already scheduled to defend his title against Colby Covington at UFC 268 and Luque has never been in the business of waiting for anybody or anything for too long.

“It’s the perfect matchup for me right now, considering I don’t have many different names I can face,” Luque said. “Leon Edwards doesn’t want to fight anybody or he might fight [Jorge] Masvidal, we don’t know what’s going to go on with that. I would love to have a rematch against him but it doesn’t seem likely. I’m not going to fight Gilbert Burns, everybody knows that. We’re brothers and that’s not going to happen. Colby [Covington] is lined up with Kamaru [Usman] so Nate is a guy, he has a big name, he has been doing a lot in my division and in the history of the UFC.

Diaz is currently coming off a loss to Leon Edwards in a five-round fight back in July at UFC 263 but he almost snatched a victory from the jaws of defeat after storming back and nearly earning a finish in the final round.

Luque commends Edwards for a job well done for the majority of that fight but he also understands that Diaz wanted something more out of the battle that he didn’t get that night.

“Leon is a really good fighter in the sense of technique and strategy,” Luque explained. “He’s a really good fighter. I fought him back in 2017. He had a really good game plan, he beat me on that fight. It was a close one but he beat me. I thought it was really strategic and he didn’t bring the fight as I think Nate expected. Nate really expected that Leon would come and try to knock him out, try to take him out of there and that’s where Nate shines. Nate shines when guys come to fight, come really to finish a fight or go at their opponent.

“That’s why I think he didn’t look very good during most of the fight. At the end, he started finding his rhythm and we had that last final minute of the fight. It was a crazy minute. I thought he might get that finish. That would be awesome. At the end of the day, he went out there, he looked good. He looked like he was still in shape, he can still go out there and beat some tough guys. For me, Nate is a really dangerous guy that I will never underestimate.”

One concession Diaz did receive for the fight against Edwards was being booked for five rounds despite the matchup taking place on the undercard of a pay-per-view where only non-title fight main events typically get scheduled for 25 minutes.

Luque would hope to receive the same consideration for a fight with Diaz or maybe something even better if the UFC is up for it.

“I want to fight five rounds to see how it is, especially possibly fighting for the title after another fight,” Luque said. “I would love to have a five rounder. I know Nate likes to have five rounds so let’s do that.

“I even threw out there we could do 10 rounds and I’m serious about that. Maybe six, seven, eight rounds, something different if they want to throw it in just to make it special, I would be down for that as well.”

Ideally, Luque would love to compete again before the end of the year and Diaz has said that he wants to fight in December so the timing lines up for both athletes.

While no formal offers have been made at this time, Luque feels like the UFC has to take advantage of this opportunity now that both fighters are committed to this particular matchup.

“It’s something that we both want, me and Nate want,” Luque said. “It’s likely to happen. I mean we’ve got to wait for the UFC. At the end of the day, they’re the ones that are going to make the fight happen. I don’t know.

“I think that it’s kind of like a no brainer for the UFC. Two tough guys that want to face each other and it’s going to be a banger of a fight. The fans will enjoy it. It only makes sense for it to happen so we’ll see.”