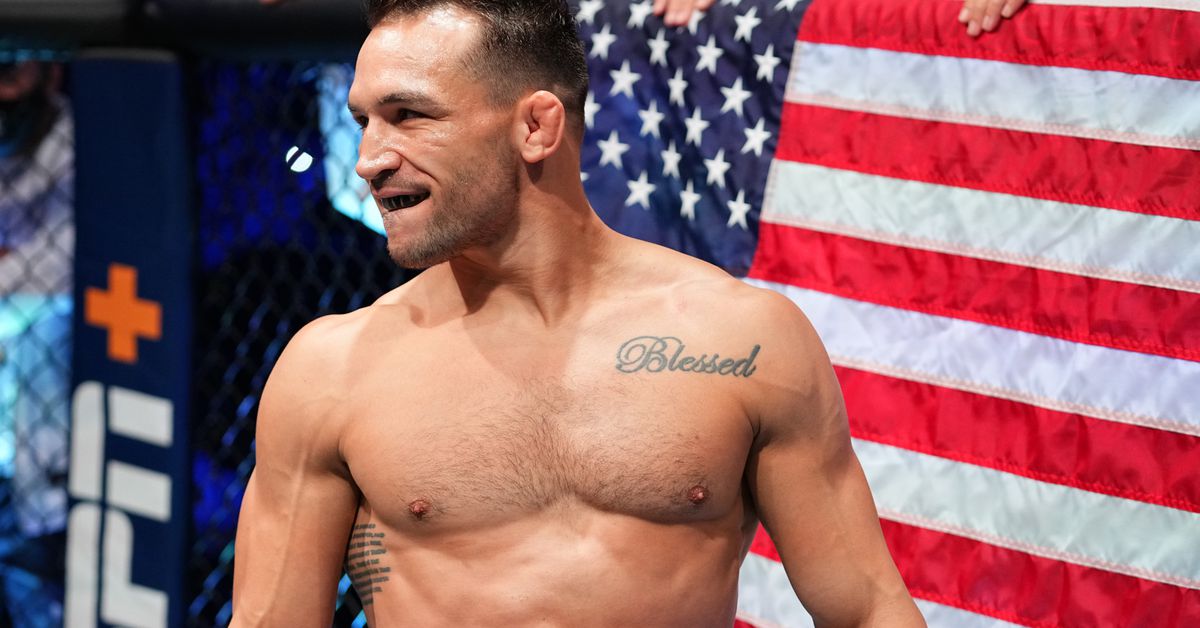 Scheduled for UFC 268 on Nov. 6, Michael Chandler vs. Justin Gaethje ranks highly among the most anticipated bouts of the year. Both Lightweight veterans are coming off losses in title fights and looking to jump right back into the mix. More importantly, each man has a reputation for thunderous knockouts and wild scraps, so pairing the two off seemingly guarantees an excellent battle or at least a quick finish.

… Unless one of these All-American wrestlers decides to shoot! As the bad blood continues to slowly bubble between the two, Gaethje insists that it will be Chandler looking for a way out of the dogfight.

“The dude comes to fight,” Gaethje told The Schmo (via MMAJunkie). “He loves fighting just as much as me. Styles make matchups, and this is a stylistic matchup for the fans. Someone’s going to get knocked out – unless he turns into a b*tch and tries to turn this into a wrestling match the whole time. He’s talking about timid souls taking a step backwards. He’s going to be a timid soul when he starts shooting for legs because he doesn’t like the power. That’s what I think.”

Most likely, the winner of Chandler vs. Gaethje will go on to fight the victor of Charles Oliveira vs. Dustin Poirier, who will duel over the Lightweight crown on Dec. 11 at UFC 269. Of course, there are other top contenders like Islam Makhachev who could potentially throw a wrench into the mix as well.

If nothing else, the Lightweight division is never boring!

Arman Tsarukyan vs. Gregor Gillespie is a ridiculously good Lightweight fight. I’d watch either of those guys fight anyone!

Paddy Pimblett can lose every fight from here on out, and he still lived up to his “cash cow” promises.

James Krause tried to play the hero following today’s fight cancellation madness, but it wasn’t meant to be.

This is wild. Deron Winn vs. Phil Hawes canceled. Chris Curtis steps in very late to face Hawes. Curtis makes weight. Hawes declines the opponent change. And JAMES KRAUSE (@TheJamesKrause) who is there to coach Tim Elliott, offers to step on the scale and take the Curtis fight!

Randy Brown is not impressed with the extra money coming his way after Jared Gooden missed weight.

Dude misses weigh by 4 1/2 lbs lol. ok i get 20 % from purse, but the issue is homie only got 3 fights in the UFC. He’s prob making like 15grand. So i get 20% of That in exchange for a weight advantage smh. Gotta start hitting these dudes for like 50% #unapologeticallyoverweight

Internet investigation has revealed that Brian Ortega and Tracy Cortez are engaged — congrats to them both!

Even The Undertaker is getting involved in Tyson Fury vs. Deontay Wilder 3!

Highlights of one of my favorite fights of all-time appeared on the timeline today, so of course I’m going to include ‘em!

Falling off back mount is rarely ideal, but this is the best way to adjust!

Hooking the arm with your legs to finish the anaconda is such a sweet adjustment.

Midnight Music: Another classic from the ‘80s mix!

If Joshua can’t get a title fight, he’d consider Ngannou
Jamahal Hill Responds To Callout: “Chubby Will Turn You Into A Meme”
Fedor Emelianenko Explained: The Legend Of The Last Emperor | MMA Fighting
All-Star Cast On Hand To Honor Fedor’s Retirement
In Sabah Homasi, Brennan Ward finally has opponent he can amp up for