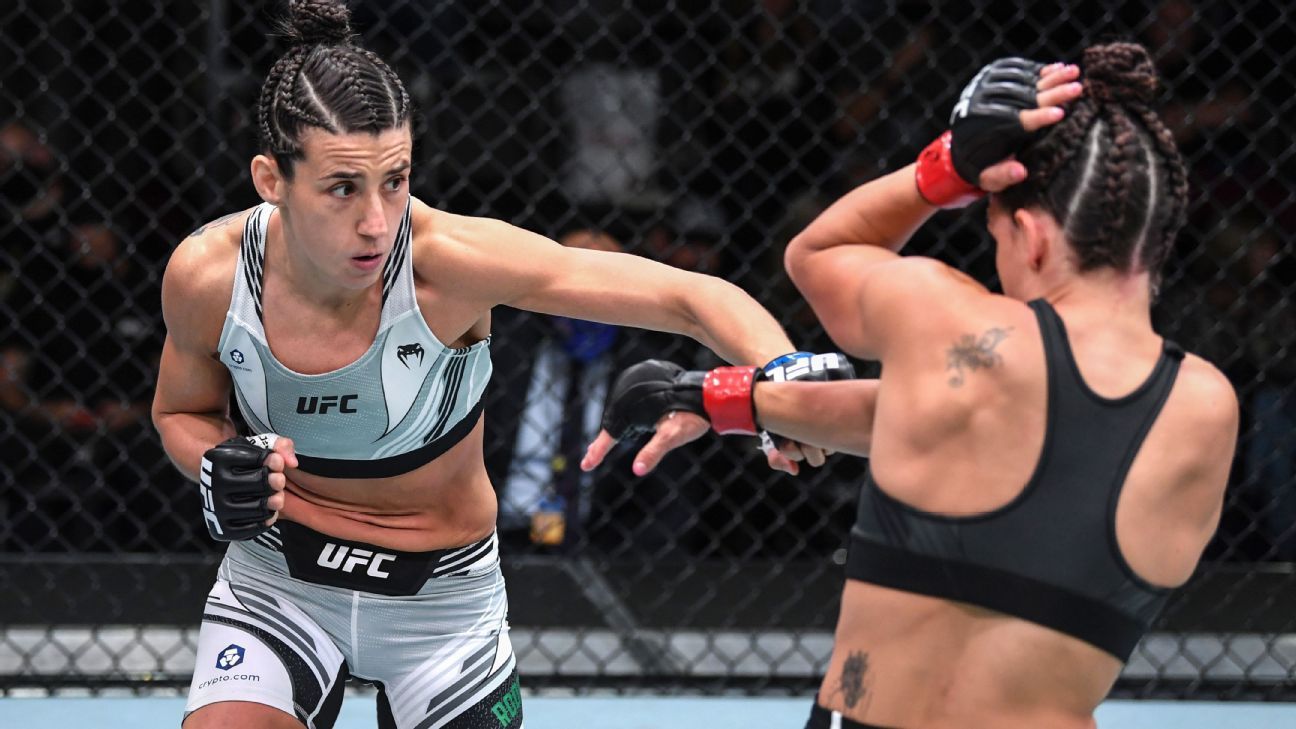 Marina Rodriguez passed another major test and stated her case as a potential future title challenger.

Surviving several terrible positions on the ground, Rodriguez defeated Mackenzie Dern via unanimous decision (49-46, 49-46, 49-46) in the main event of UFC Fight Night in Las Vegas. It was a classic striker vs. grappler battle — Dern is a former Brazilian jiu-jitsu world champion — and in this case, Rodriguez the striker came away with the victory.

Dern had Rodriguez in huge trouble in the second round, working for multiple submissions on the ground. But Rodriguez managed to survive the jiu-jitsu onslaught and win the next three rounds with her striking. For the most part, Rodriguez kept Dern at bay other than that second round, thanks to her superior standup acumen. She kept distance and peppered Dern with combinations with her hands and front kicks to the legs and body.

“I had to pace myself,” Rodriguez said through a translator in her postfight interview. “We had five rounds to work, so we worked a little bit slower than usual. But there was a point there.”

Rodriguez used her Muay Thai skills with great success in every round except for that disastrous second. Dern did get Rodriguez down to the mat near the end of the fourth round. She went for an armbar and an omoplata, but there wasn’t enough time to work and Rodriguez made it to the bell again.

In the fifth round, Rodriguez was the fresher fighter, landing those combinations and finishing with some big right hands, plus some hard kicks and a jumping knee toward the end of the fight.

Coming in, ESPN had Rodriguez ranked No. 4 and Dern ranked No. 6 at strawweight. Rose Namajunas will defend her UFC women’s strawweight title against against Zhang Weili at UFC 268 on Nov. 6 in New York. Former champion Carla Esparza is likely to get the Namajunas vs. Zhang winner, but now Rodriguez has put herself in that title mix.

“I’ve been ready to fight five rounds, to fight for a title since the day I started this thing,” Rodriguez said. “We know there are maybe some girls ahead of me, but if they’re not available … I can be ready for a title fight.”

Rodriguez (15-1-2) has won three in a row. She was coming off a unanimous decision win over Michelle Waterson in May, another Fight Night main event appearance. The Brazil native is 5-1-2 in the UFC, with her only loss coming against Esparza, and a pair of draws coming against Cynthia Calvillo and Randa Markos.

Rodriguez, 34, is not one of the younger contenders at women’s strawweight, but she has only been a pro MMA fighter since 2015. She competed in Muay Thai prior to that.

Dern (11-2), once considered the best pound-for-pound women’s jiu-jitsu competitor in the world, had a four-fight winning streak snapped. She was coming off a first-round submission over Nina Nunes in April. The Arizona native of Brazilian descent fights out of Orange County, California under coach Jason Parillo who has coached the likes of legends BJ Penn, Michael Bisping and Cris Cyborg.