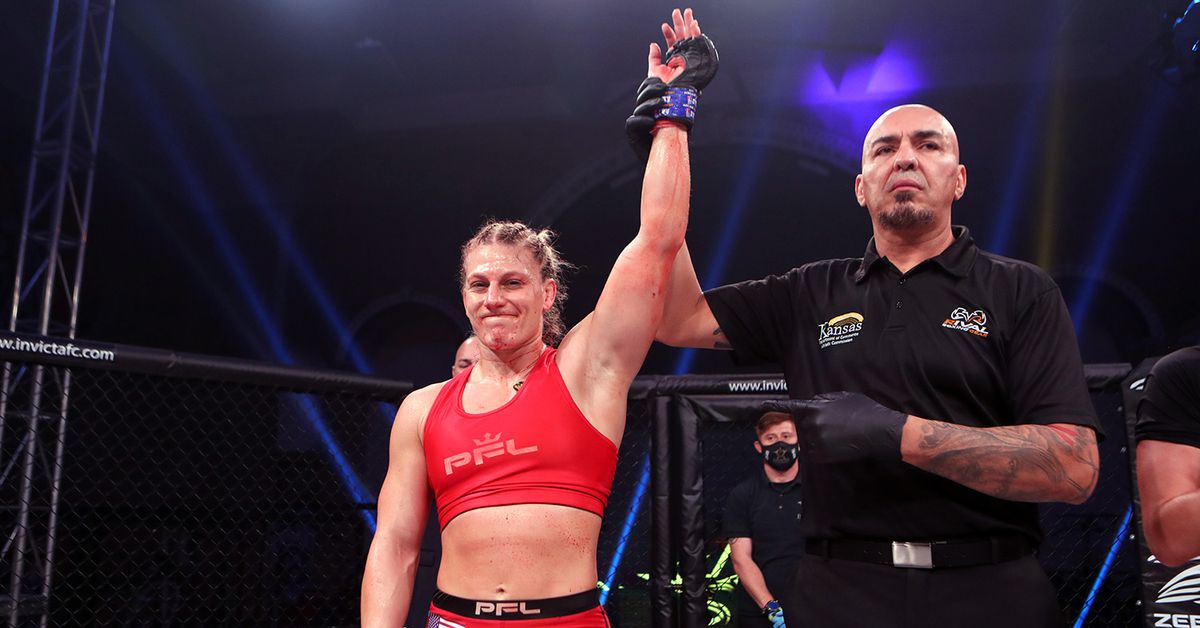 Kayla Harrison has never known a fighting home other than the PFL, and if the promotion has anything to say about it, that won’t change any time soon.

At the 2021 PFL Season 3 finals on Wednesday night, the former two-time Olympic gold medalist faces Taylor Guardado in the main event in the final fight of her current contract. Then she’ll have to make one of the most important decisions of her entire career: As a free agent, she’ll be allowed to sign with any promotion she wants to call home.

PFL CEO Donn Davis isn’t hiding the organization’s intentions – he doesn’t want her going anywhere but back in the PFL cage.

“We discovered Kayla. We’ve helped develop Kayla. We’re a fighter-first league, unlike the other leagues that only care about the league and not the fighters. So I’m confident things will work out, but our focus is watching one of the most exciting stars in MMA do her craft tomorrow night.”

During a Monday appearance on The MMA Hour, Harrison didn’t want to spend much time talking about her looming free agency, especially with a fight on the horizon. Later that same day, UFC President Dana White was asked about potentially pursuing Harrison once she’s available and said, “I would stay [in the PFL] and keep fighting the type of women she’s fighting there before I would come here and fight an Amanda Nunes.”

In response, Davis argues Harrison can continue fighting top-notch competition in the PFL — including a potential showdown with former Bellator champion Julia Budd, who just recently signed with the promotion — and continue to serve as the face of the promotion. Not only that, she has a chance to take home a $1 million grand prize at the end of each season.

“We try to build up our fighters. I love Kayla. I’m not going to bad mouth or talk about any of our fighters to have a negotiating position with them. I love them all and I want them all to be here. We’re going to do everything to keep them here. We like to build up their energy. We like to support their pursuits. So we just have a more positive outlook on how to have a relationship between the fighters and the league.”

Davis believes that’s a key difference that separates the PFL from the UFC, Bellator or any other MMA promotion, especially when regarding the company’s season long format.

“It’s a fighter first company and that’s everything about our culture, everything about our relationships,” Davis said. “But fighters want to bet on themselves. They want to go as far as their talent will take them. In the UFC, there’s politics, there’s social media and there’s B.S. It’s not all about who is the best fighter.

“In the PFL, it’s up to the fighter. Everybody starts the season on an equal foot just like the NBA, just like the NFL. You win four times, you become champ.”

While no decision about Harrison’s future will be made until after Wednesday night, Davis wants her on the roster for 2022 and beyond. With plans to launch the PFL on pay-per-view next year, as well as a new challenger’s series to build talent from the ground floor, he has every confidence that the promotion will continue to rise.

More importantly, the fighters will lead the charge.