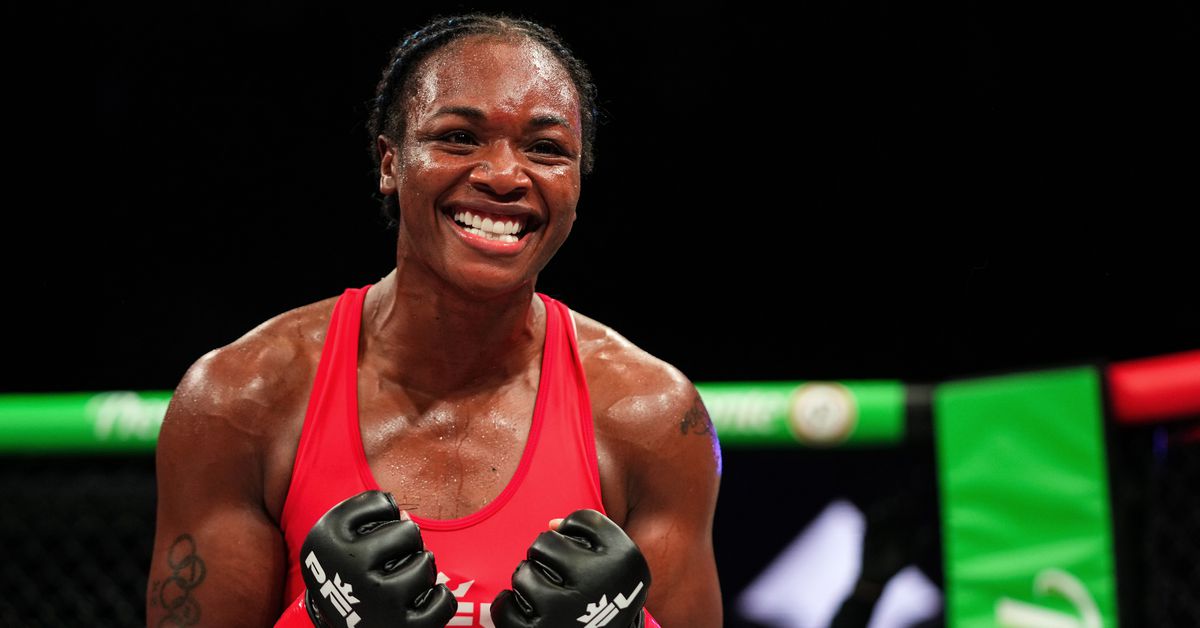 When Holly Holm decided to made the move from boxing to mixed martial arts, she had one very specific goal in mind when she first started her transition.

“I wanted to be an MMA fighter,” Holm explained when speaking to MMA Fighting. “I didn’t come to MMA to box in the cage.”

It was that exact mindset that allowed Holm to eventually rise up the ranks to become a UFC champion and now she’s constantly considered one of the top pound-for-pound women’s fighter in the entire sport. She still maintains a storied boxing career but that’s in her past because these days Holm is best known for her MMA career.

“It’s to the point where people kind of forget that I was a boxer,” Holm said. “That was my goal coming into MMA.”

Armed with that knowledge, Holm is currently helping another supremely talented boxer follow in her footsteps as multi-division champion and two-time Olympic gold medalist Claressa Shields makes the same move from boxing to MMA after inking a deal to join the roster at the PFL.

In fact, Shields sought out Holm because if she was going to seriously pursue a career in MMA, she needed to find another fighter to speak her language.

“She is the blueprint,” Shields said about Holm when speaking to MMA Fighting. “One of the reasons why I actually chose Jackson-Wink to train at was because they had already trained Holly Holm and made her be a great MMA fighter.

“It’s really been a blessing to work with Holly because talking to her, sometimes when you talk to other fighters in the gym, they don’t understand what I’m saying because they come from different backgrounds.”

According to Shields, she was so accustomed to boxing and the training required to prepare for that particular sport that it took her time to even begin using different weapons in MMA, which is where Holm became such a tremendous asset to her.

“Holly comes from a boxing background so when I was talking to her early on, I just forget sometimes that I have legs in there,” Shields explained. “That I can use my legs to get people off me when I’m on the ground. She was like ‘I was the same way when I first started!’ So for her to say ‘sometimes you have to think about this and remember that in MMA, even though we have all these different arts, we have to always use our strong points and always punch, no matter what position you’re in.

There’s a famous saying by legendary Brazilian jiu-jitsu instructor Carlson Gracie Sr. that says “punch a black belt in the face once, he becomes a brown belt. Punch him again, purple belt.”

It’s that philosophy that allowed Shields to understand how to use her boxing skills while competing in MMA and it had nothing to do with standing and trading with opponents on the feet.

“[Holly] was like you can always punch and jog somebody’s brain up to where they can’t be thinking about those moves because jiu-jitsu is very complicated,” Shields said. “It really is. It’s so many different moves and you really have to do that for a really, really long time to get a hang of it but she was like you’ve got to keep those people thinking.

“When I punched Brittney Elkin in the third round, I knew her mind went into survival mode. She forgot all about everything she knew about jiu-jitsu and she just started covering up cause those punches were hard. She probably felt the hardest punches I’d ever hit anybody with in my career cause it was ground and pound.”

Working with Shields since the first day she set foot in the gym, Holm has seen tremendous growth in her understanding of MMA but she’s been even more impressed by other attributes the 26-year-old Michigan native has shown during training sessions.

“She has a work ethic about her and she’ll show up,” Holm said about Shields. “She has the championship mindset. You’ve seen it in her last fight. She was mounted round after round and didn’t let it break her. So she definitely has that going for her.

“At the end of the day, it takes time. It just takes time to catch up when you don’t have a ton of time on the mats. It’s definitely learning a lot of that and she’s definitely putting the time in. Is everything on the ground where it needs to be? No, it’s going to take some work but that’s why I’m glad she is one of those who isn’t afraid to go in and put that work in.”

In her debut fight back in June, Shields spent the better part of two full rounds on her back defending strikes and submission attempts from Elkin, who was quick to put her on the ground in order to negate the obvious advantage a championship boxer would have on the feet.

While it certainly wasn’t the game plan, Holm was actually happy that Shields got put into those positions because she had to fight her way out of it. That’s something that has to be learned on the job and Shields had to decide right away if she was going to sink or if she was going to swim.

“I learned about myself that I really just do not have a panic button. I don’t know why,” Shields said about her first MMA fight. “Certain things happen in my life or in boxing or in the gym and I’ve always just had a way to remain calm. I think that definitely helped me and played in my favor in my pro debut.

With her second fight now just days away, Shields is ready to show off all the things she’s learned in the past four months while also acknowledging that she’s still got a long way to go before she can consider herself on the same level as someone like Holm.

When she first landed in New Mexico to learn MMA for the first time, former UFC heavyweight champion Jon Jones actually advised Shields to train for at least a year or more before booking her debut fight because he knew the difficult road she was about to travel.

If there’s been one criticism regarding Shields transitioning to MMA, it’s been her insistence that she wants to become the first fighter to hold titles in two different sports simultaneously, which would then help her achieve the “GWOAT” — greatest woman of all time — status that she’s been seeking.

The problem is Shields is essentially still learning to crawl in MMA and just about anybody who’s been around the fight game knows it’s going to take her twice as long to walk if she’s splitting her time between two sports.

That’s a risk Shields is willing to take because she’s not done with boxing quite yet.

“I’m able to focus on MMA,” Shields said. “Actually with this fight on Oct. 22 coming up, I have a boxing match in the U.K. on Dec. 11 up on Sky Sports. I’m still considering doing both. I don’t think there’s that many fights left for me in boxing. I know I want to beat up Savannah Marshall next year. I would love to fight against another undisputed champion, whether it be Franchon Crews at 168 [pounds] or it be Jessica McCaskill at 147.

“I’m only 26 right now and I want to continue to do both boxing and MMA but I know whichever year I choose to do the PFL tournament that I will be taking off boxing for that entire time. So if that’s for a year or two years getting prepared, that’s what I’m going to do but I can always take a boxing match in between here and there and just do it because I’m so skilled. These girls can’t compare to me. You give me four weeks to get ready, I’ll go in there and beat anybody in boxing.”

With a win on Wednesday, Shields would move to 2-0 in her MMA career but she’s still undecided on when she’ll enter the PFL tournament with a chance to win the $1 million grand prize.

In theory, Shields should probably take at least another year and a few more fights before competing in the full PFL season but she’s not going to be responsible to make that decision.

“I’m going to let my team decide that. I really don’t know that,” Shields said. “I’ve been sparring with Holly Holm, who is a top-notch MMA fighter. I’ve been sparring with Arlene Blencowe, who is also one of the top five Bellator women and she fought against Cris Cyborg. I’ve been able to get into the cage with those girls and just learn from them, to spar against them. To try and make it be as competitive as possible. It’s been some very, very interesting sparring sessions. I’ve been learning a lot.

Shields is definitely going through a crash course education when it comes to MMA but none of that seems to scare her very much and thankfully she still possesses the ultimate equalizer for anyone foolish enough to stand and trade with her on the feet.

“I don’t think any woman in the world is a better striker than me,” Shields said without hesitation. “I’m a very, very smart boxer. Yeah, I’ve got power and I’ve got speed and stuff like that but I have a very, very high IQ.

“I already knew that I could learn everything and I learn things fast. So the average fighter or boxer or athlete coming into MMA, it may take them years but for me, it’s going to take me less time because I learn it, it’s in my mind, I practice it and then all of a sudden I own it and I’m able to do certain things that other fighters can’t do plus my athleticism. I’ve been telling people that. I’m going to be able to learn fast.”