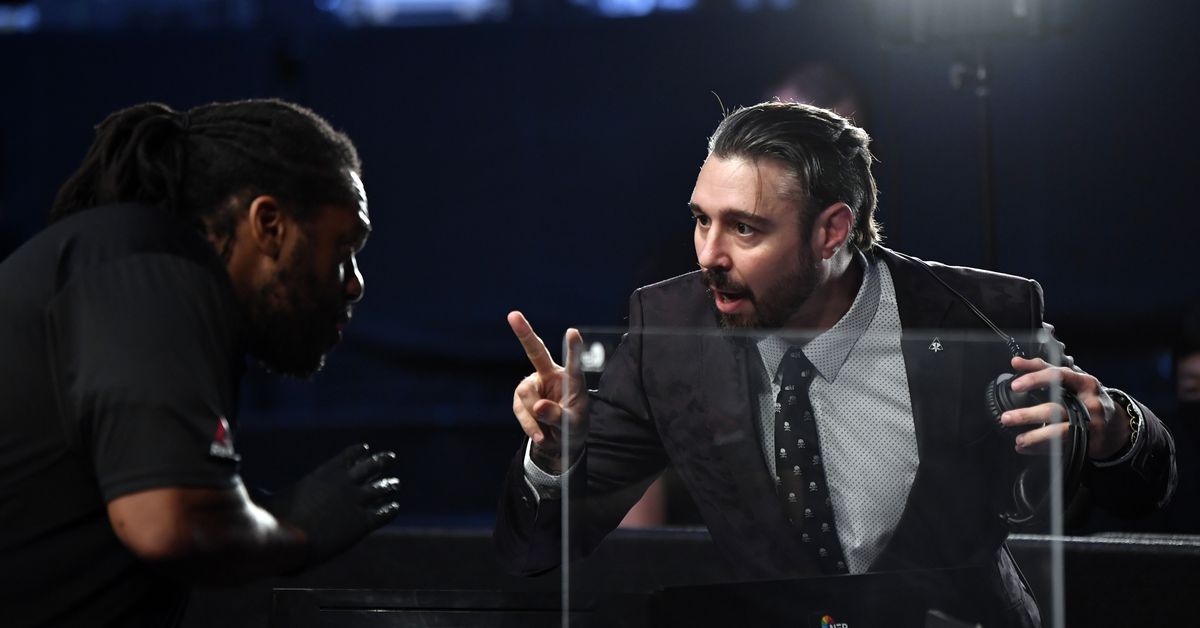 There remains confusion and misunderstanding about the verbal confrontation between Dan Hardy and Herb Dean at UFC Fight Island 3, according to Hardy. But the former UFC commentator still doesn’t regret his actions that day.

“My main focus is the fighters getting protection, and he’s still present at regular events and he’s still making mistakes consistently,” Hardy said Monday on The MMA Hour. “He still waves off the fights at the end of the round. He still doesn’t know exactly what he’s doing. It concerns me. It really does, because at some point, our sport is going to be negatively affected by someone not doing their job, and we’re all going to be impacted by that, and we’re all going to be saddened by it.

“This weekend was a good example of that. We were close to it. Brian Ortega [at UFC 266], same situation. None of these people are going to be there in 15 or 20 years when these guys can’t remember their kids’ names. That’s the thing we have to not forget.”

Dean was not working the event Hardy is referencing, UFC 267 in Abu Dhabi. But like many who watched the event, the one-time UFC welterweight title challenger had a strong reaction to the performance of referee Vyacheslav Kiselev in a welterweight fight between Elizeu Zaleski dos Santos and Benoit Saint-Denis. After Saint-Denis was allowed to take a tremendous amount of damage en route to a decision loss, the promotion took the unusual step of removing him from further fights at the event. UFC President Dana White called the referee’s performance “disgusting” amid immediate outcry from fight fans.

As one of the most experienced referees in MMA, Dean has been at the center of dozens of high-profile MMA fights without issue. But he’s also been at the center of several controversies, particularly in recent years. At UFC Fight Island 3 in July 2020, he drew Hardy’s ire over a pair of stoppages that included a knockout of Jai Herbert in a fight against Francisco Trinaldo.

To this day, Hardy believes White and others misunderstand what really happened after the fight. He doesn’t dispute that he very vocally called for the action to be stopped when Herbert hit the canvas, believing the British fighter was unconscious. What he does dispute are reports that surfaced immediately afterward that he approached Dean cageside after the fight was over.

What really happened, he said, is that Dean approached him at his broadcast table “at a pace” and confronted him.

“As soon as the fight was over, I am now in my spot in the broadcast, I’ve finished commentating the fight, I’ve taken off my headset so I can turn around and face the camera to interview Trinaldo, because this was the social distancing interviews,” Hardy explained. “So I’m still behind my desk. As I’m standing up, I notice that Herb Dean’s walking out of the cage and coming over to me. And Herb doesn’t move particularly quick, and he was moving quick. He was walking to my desk with a pace. So I’m not going to turn my back on him, of course, so I take my headset off, and I mute it, so you can’t hear what’s going on in the broadcast. And we had a back and forth conversation.”

Some of that was caught on hot mics, and Hardy subsequently interviewed Trinaldo. But that wasn’t the end of the fallout from the confrontation. Hardy said when he got backstage, a UFC producer confronted him and “was yelling … because I’d gone over to confront him.”

“I never did — I stayed at my desk,” Hardy said. “And when I spoke to the UFC about it afterward, their advice to me was, ‘You should have turned your back.’ And as a martial artist, I could never do that. I can see this guy coming at me with a pace, I’m going to stand and be ready. He was leaning over my desk. So maybe in hindsight, if I’d complained about that, I might have found myself in a more protected position.”

Hardy has had plenty of time to think about how he might have acted differently in that situation as well as another incident with a UFC staffer that reportedly led to his dismissal from the UFC. He acknowledges he wasn’t 100 percent in the right regarding the way he communicated his concerns about what was going on, and yet he believes he was in the right for speaking up, whether it be for the fighters or himself.

“I was in the wrong to shout at the referee on the broadcast — I’m well aware of that,” he said. “That was my error, and I’ll own that error. But I’ll stand by it, because sometimes, they need someone who will do that. If that was a silent arena on Saturday [at UFC 267], you would have heard [Daniel Cormier] and [Paul] Felder doing the same thing, halfway through the second round of a fight that went the distance, and we had nobody in there to protect that fighter.

“My concern is that the reaction to that was I was the one in the wrong, and I was the one that was shunned, even though the referee was not at all self-reflective with two late stoppages on the same card. I think the more familiar faces, they get a level of respect that is due to them, of course, but we have to make sure these people are protecting the fighters.”