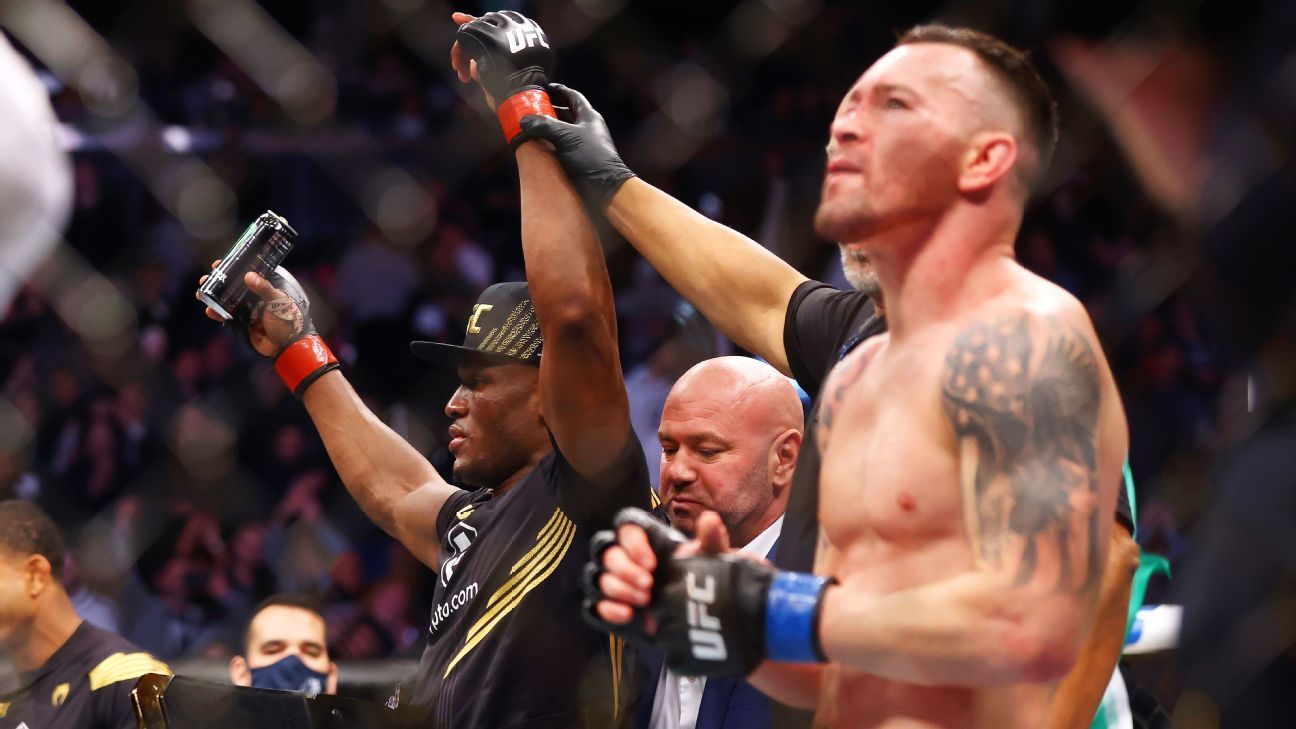 NEW YORK — Kamaru Usman has said repeatedly that he dislikes Colby Covington more than any other opponent he has ever faced. But after their 10th round in the cage together, Usman and Covington could do nothing except embrace.

Usman beat Covington via unanimous decision (48-47, 48-47, 49-46) in the main event of UFC 268 on Saturday night at Madison Square Garden. With a win in their rematch, Usman retained the UFC welterweight title.

“There was a lot of trash talk, a lot of bad blood,” Usman said in his postfight interview. “I’m sure there’s going to still be some after tonight. But this guy is a tough son of a b—-. He’s tough as s—.”

The two fought at UFC 245 in December 2019 with Usman winning via fifth-round TKO in what many consider one of the best title fights in UFC history.

This one didn’t disappoint either. Usman nearly finished Covington with huge left hands in the second round, but Covington rallied late, hurt Usman with a body kick in the fourth round and landed hard combinations in the fifth.

Usman said he tried to be more aggressive and finish Covington but had to be more tactical in his approach.

“He’s tough. He’s super tough,” Usman said. “I wanted to get crazy and get him out of there. But that’s not what the best do.”

ESPN has Usman ranked at the top of its pound-for-pound list of best MMA fighters. At welterweight, Usman is No. 1 and Covington is No. 3.

The sellout crowd of 20,715 was engaged from the beginning of the fight, with audible chants for both men. Usman had a strong first round with his boxing. In the second, Covington clipped Usman with a left hand, then waded in — and paid for it. Usman dropped Covington with a left hook then dropped him again with another left when Covington got up. Usman tried to finish on the ground, but Covington survived until the bell.

Covington was surprisingly fresh in the third, peppering Usman with combinations throughout the round and a late takedown. The fourth might have been Covington’s best round with a left body kick that hurt Usman. The fifth was very close. Covington went for a left head kick that was blocked but still did damage. Usman landed a hard right hand late.

“Usman is just the best ever. He’s the best welterweight of all time,” UFC president Dana White said at the postfight news conference. “He’s on his way to possible [greatest of all time] status.”

Usman (20-1) has 15 straight wins in UFC, the second-longest streak in the promotion behind only Anderson Silva (16), who is considered one of the best of all time. The Nigeria native, who lives in Florida and trains in Colorado, was coming off a second-round knockout win over Jorge Masvidal at UFC 261 in April. Usman, 34, has five title defenses and is chasing the welterweight record of nine set by Georges St-Pierre. In total, Usman has 19 straight wins going back to May 2013, the second-longest unbeaten streak among fighters on the UFC roster behind featherweight champion Alexander Volkanovski (20).

Covington (16-3) has won eight of his past 10 fights, with the only losses during that span coming to Usman. The California native fighting out of Florida hadn’t fought since a fifth-round TKO win over former champ Tyron Woodley in September 2020. Covington, 33, is the former UFC interim welterweight champion.

“The guy is so durable and tough. His fighting style is tough to beat,” White said of Covington. “And his cardio is insane. I don’t think anybody else beats that guy but Usman. If Usman doesn’t exist, he’s the world champion. Unfortunately for him, Usman does.”

Despite some of the crass things Covington said in the lead-up to this fight — including accusations of performance-enhancing drug use and comments about Usman’s father, who served time in jail — Usman said he had no choice but to give his rival props. He said he would leave what was said at the end of the bout between himself and Covington.

“When you share an Octagon with someone this tough, you can’t help it,” Usman said. “That respect is gonna come.”

Those feelings went away quickly for Covington, who added he might have broken his right foot early in the bout on a kick.

“[Usman is] a cheating coward,” Covington said in his postfight press conference. “I have no respect for that guy. He’s obviously a cheater. He’s cheated in multiple fights.”

Covington also called out Masvidal, his former teammate and best friend, proposing that Masvidal pulls out of his scheduled fight at UFC 269 on Dec. 11 and fights Covington instead.

“If he doesn’t come out and fight me,” Covington said of Masvidal, “he lost all his street cred and he’s a b—-.”