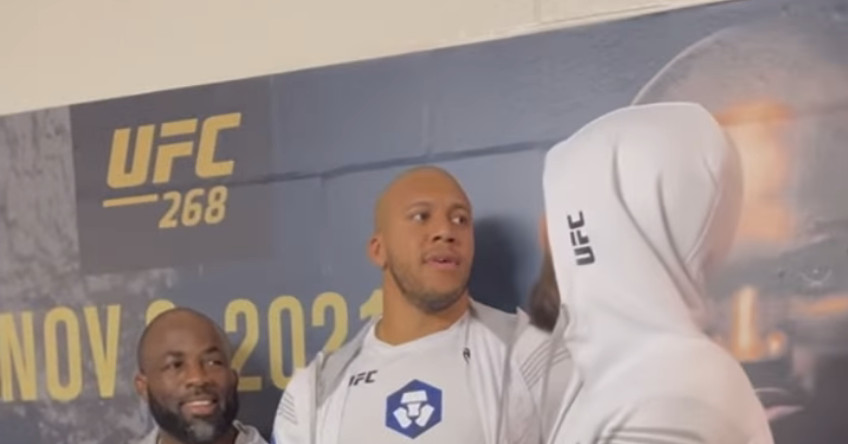 Fernand Lopez looked at the UFC staffer’s phone and noticed it was shaking. Francis Ngannou had just walked by backstage at UFC 268 and appeared to ignore them.

Lopez realized the employee was laughing.

“Yep — I got it all,” replied the employee. Thirty seconds later, Lopez, his charge Ciryl Gane, and Ngannou were all viral.

When Ngannou didn’t acknowledge Lopez, his former coach, and Gane, his brief teammate, it wasn’t a surprise to the former. For the latter, it was kind of a lost bet.

Some time before that moment, Lopez said Wednesday on The MMA Hour, Gane had presented such a scenario for guidance. Should they say hi to Ngannou? Should they ignore him? What was the protocol with an upcoming title unifier between three people who once had shared the mats and were now aligned against each other?

Lopez said they should say hi.

Lopez and Gane had their reasons for reacting the way they did, but they were both genuine. They had just finished a press conference, Lopez said, and were in that particular backstage corridor of Madison Square Garden to watch Alex Pereira make his octagon debut on a nearby TV monitor. Lopez was talking to Nassourdine Imamov, another one of his students who’d earlier that night wowed the crowd with a second-round TKO of Edmen Shahbazyan, when he noticed his student’s eyes focused elsewhere.

“So I brought my eyes this way, and I saw Francis coming,” Lopez said.

In the video, you can see Lopez smile and chuckle. After all, he’d predicted this.

“I was like ‘What do you think? You’re fighting the guy? You think he’s going to kiss you?’”

Not only that, but for Lopez, there was something dishonest about pretending that everything was copacetic. He’d given several interviews on his falling out with Ngannou, and Ngannou had responded in kind. To act as though that hadn’t happened would have been dishonest.

“That’s stupid for me to say hi to someone who’s trying to look at the ceiling,” Lopez said. “I’m not the problem, because I don’t expect anything from him. Let’s be honest and be fair in life. There’s people in life who don’t talk to their parents; they stop talking to their parents. This is their right, their right to be bad and say, ‘I don’t want to talk to my mom anymore.’

“I’m not his mom. I’m not his dad. If he wants to stop having any relationship with me, that’s fair, that’s normal. I don’t have anything to do with that.”

For Gane, Lopez said the interim champ naturally had a different perspective. Ngannou was his opponent, but he was also a longtime training partner of Imavov at the MMA Factory in Paris, where Ngannou was elevated from poverty to MMA stardom. Imavov, Lopez said, had put in countless hours with “The Predator” and taken many of the punches so many heavyweights fear — as a middleweight.

It took just a couple seconds to further set the stage for the title fight that headlines UFC 270 on Jan. 22 in Anaheim, Calif. For Lopez, the fight is unavoidably personal given his history with both fighters. It might have just become that for Gane, too, though the French heavyweight isn’t known to simmer on any of the usual drama that accompanies the fight game.

He was just surprised in that moment, and maybe a little disappointed. And even on a cell phone camera, the staffer knew he’d caught something real.

“If you have a film director, you cannot do better than that,” Lopez said. “So yeah, good job for him.”