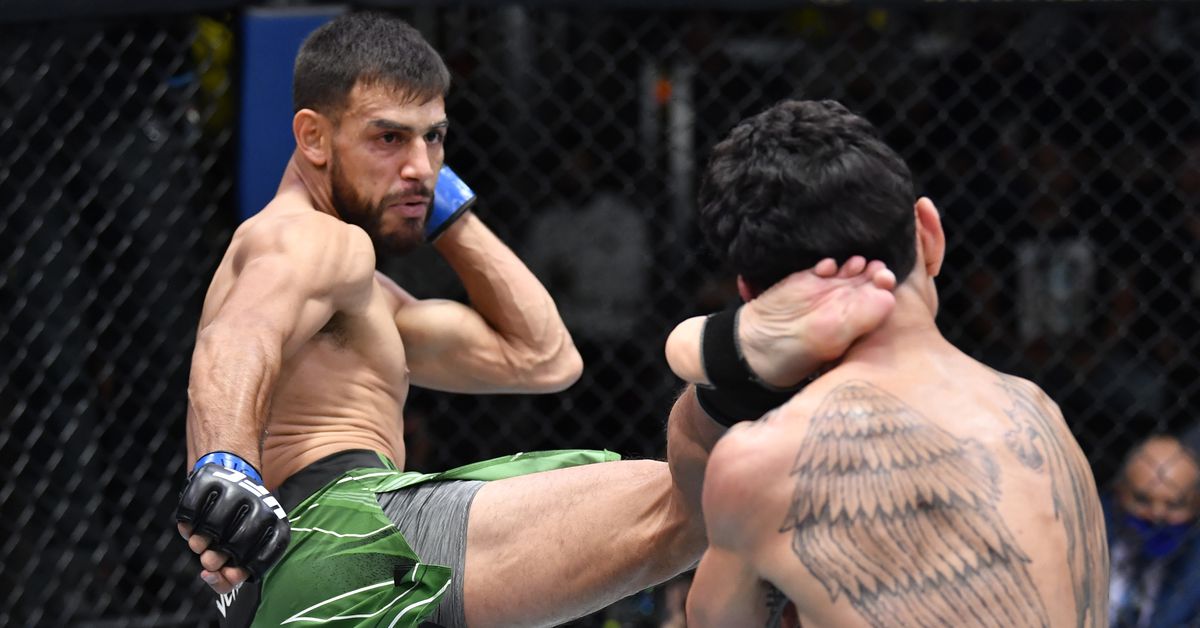 Despite losing to Max Holloway at UFC Vegas 42, Yair Rodriguez had a lot of success in the fight with leg kicks. There was a point halfway through round two where it looked like he might be able to cut down Holloway with relentless calf kicks.

In the end Max survived to earn a decision win (check out the highlights here), and afterward we learned why Rodriguez may have let up a little on those kicks later into the fight: footage from the cage showed “El Pantera” hobbling around on a foot that had blown up like a balloon.

That screenshot was taken in the minutes following the fight. It only got worse from there. Here’s a shot from the ambulance shared by Yair’s wrestling coach Izzy Martinez:

As far as balloon feet goes, it’s a pretty bad one. And once again, let’s turn to our boy and ringside physician Dr. David Abbasi to explain exactly what causes a foot to blow up like that.

“The way that the foot gets its blood flow is we have the arteries that deliver the blood down to the cells,” Abassi said in a YouTube video. “At the end of that artery is what’s called a capillary where the oxygen actually goes through and distributes to the cells. And then it comes back to the heart to get re-oxygenated through the veins. So those capillaries are very small, very thin structures that, with repetitive trauma, those can actually burst.”

“And obviously, Yair Rodriguez was doing repetitive kicks so that would be a reason to rupture or damage some of those capillaries. When the capillaries are damaged basically now you have a leaky faucet so the artery is no longer feeding to this nice capillary, the blood continues to disperse out.”

Broken or damaged bones also contribute to the swelling as well.

“You can have fractures of these bones, or you can have contusions of these bones,” Abbasi continued. “A contusion is something short of a fracture, basically severe swelling or bruising of a bone. And fractures and bruises can also cause swelling. So the bone will actually bleed and leak out into that surrounding soft tissue. That along with the capillaries can cause a collection of blood. And again, because you don’t have a lot of soft tissue on top of the foot it can become very, very noticeable.”

It certainly was, and this is a reminder that it’s not just about damage inflicted by your opponent. Fighters are pulverizing their own bones as well when they’re on the attack. In this case, Rodriguez’s foot broke before Holloway’s calf crumbled. Yet he continued to fight through the whole five rounds. Simply amazing grit and heart on display.

“Everybody thank you for being here for me and for my family,” Rodriguez said in an Instagram Live video broadcast from his hospital bed (via MMA Fighting). “I’m kind of f—king f—ked up right now, I don’t even know what I’m saying. I just want to say, it was an amazing fight. Just keep moving forward guys. Thank you.”