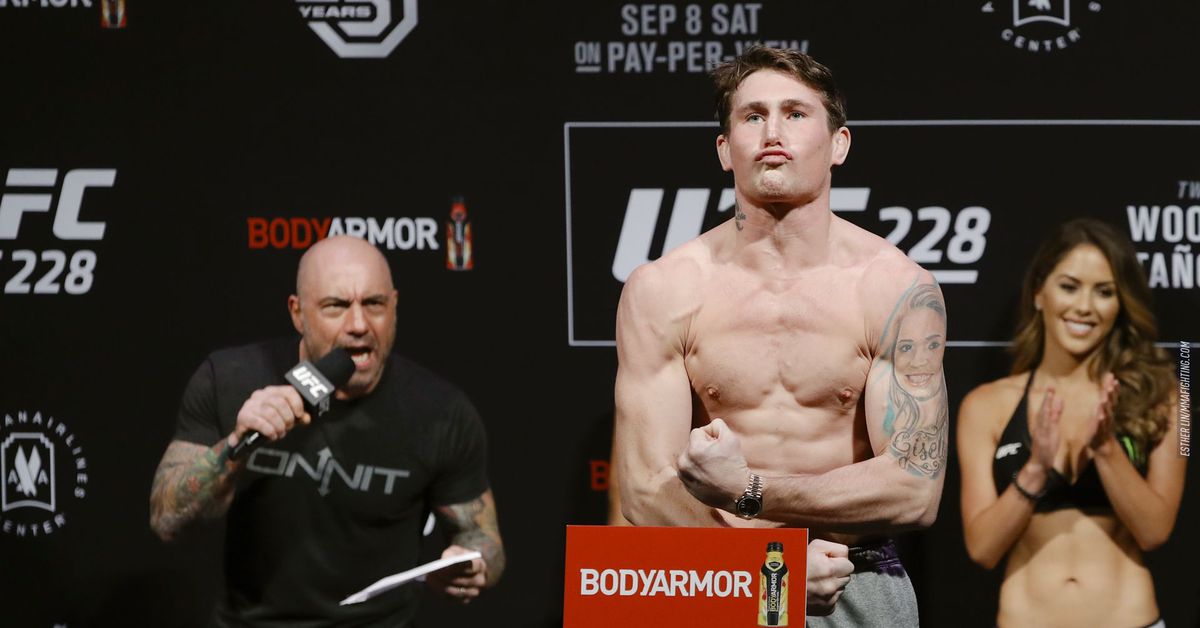 Darren Till will not be deterred.

Earlier this year, Till suffered yet another defeat inside the octagon when he was submitted by Derek Brunson in the main event of UFC Vegas 36. It was Till’s fourth loss in his last five fights and it raised questions about what exactly Till’s future will look like. Some suggested Till make the move back down to welterweight where he was able to earn a title shot back in 2018, while others have suggested that Till has simply reached the limit of what he can accomplish in the sport. But despite the many setbacks recently, Till himself has no such doubts about himself or his future.

“I’m good. Listen, losses are part of life and you have to take them losses,” Till told Michael Bisping on Bisping’s Believe You Me podcast. “That was a tough loss to take. No disrespect to Derek, he was the better man on the night, but it was a tough loss. I know I can win that fight easily on me best day and that’s just it. I know it sounds so cliché but what doesn’t kill you makes you stronger and all these things, they’re all just allowing for better things for me. I enjoy the setbacks and this is another setback, but I don’t ever want to have another setback in me MMA career again…

“I know my future looks very, very bright… Literally, (against Robert Whittaker) I lost the fight on one takedown, and in my opinion right now, Whittaker is probably the best middleweight, one of the best. I know where I’m at and people who know, know where I’m at. All the haters, the haters will soon turn into fans. It’s just the way that this game goes.”

In Till’s defense, his losses have come against some of the top fighters in the sport. Before his Brunson loss, Till came up short in a competitive fight against former champion Robert Whittaker, and before that he defeated 10th-ranked Kelvin Gastelum in Till’s middleweight debut. Given that, and considering that Till remains one of the most popular fighters in the UFC, the Liverpudlian revealed that despite his bad run recently, the UFC is still looking to book him against some of the fighters in the middleweight division.

“The UFC, they said to me, ‘Darren, we’re with you, we know what your potential is, we really love you, you’re always there for us, you’ll fight anyone anytime. You’re a man of the company,’ and I said of course,” Till said. “But they’re like, ‘Who do you want to fight?’ and I said Jared Cannonier is a good one. ‘Oh really? Jared already?’ Of course.

“There were a few options they threw out to me. One fight I really liked was Sean Strickland. They offered him as well, and I actually said to Sean – because I’ve seen him a few times at the UFC – I said, ‘Sean, if you want to get it on at some point, let’s do it because I think you’re a good fighter, I think it would be a good fight.’ So listen, I’m still fighting the top and that’s how it is.”

While the Cannonier fight won’t happen next – Cannonier is set to face Derek Brunson at UFC 270 in what is almost assuredly a title eliminator – a fight with Strickland could indeed be next. Strickland was scheduled to face former middleweight champion Luke Rockhold at UFC 268 earlier this month but Rockhold was forced to withdraw from the bout and a replacement could not be found in time. That leaves Strickland without a dance partner and since the two sit at numbers 7 and 8 in the UFC rankings, that may well be the fight to make. The only snag is timing, because with the UFC rumored to be returning to London in March, that is when Till is targeting his return.

“Hopefully a good solid card there, main event,” Till said. “I think that’s gonna be a good card. That’s what it’s looking like, but we’ll see.”

The UFC last went to the United Kingdom in 2019 for UFC London, that was headlined by a welterweight match between Till and Jorge Masvidal, which Masvidal won by second-round KO.

Training. Halle Berry says learning MMA for her new film ‘Bruised’ was ‘the hardest thing I’ve ever done in my professional career’.

UFC Vegas 43 Fighters You Should Know.

Dan Hooker hints that he may be returning to 145.

That is a lot of doughnuts.

Chiesa looks real weird without the beard. That TKZ shirt is fire though.

Thanks for reading, enjoy the fights, and see y’all next week.

Francis Ngannou Reveals When Relationship With The UFC Became Strained
Wonderboy still has it, but should he jump right back into the title picture?
Maycee Barber Details Struggles With Stalker, Reveals He’s Been Jailed
ONE on Prime Video 5 results: Anatoly Malykhin crushes Reinier de Ridder in first to become two-division champion
Jorge Masvidal Reacts To Teammate Kayla Harrison’s Shocking Loss