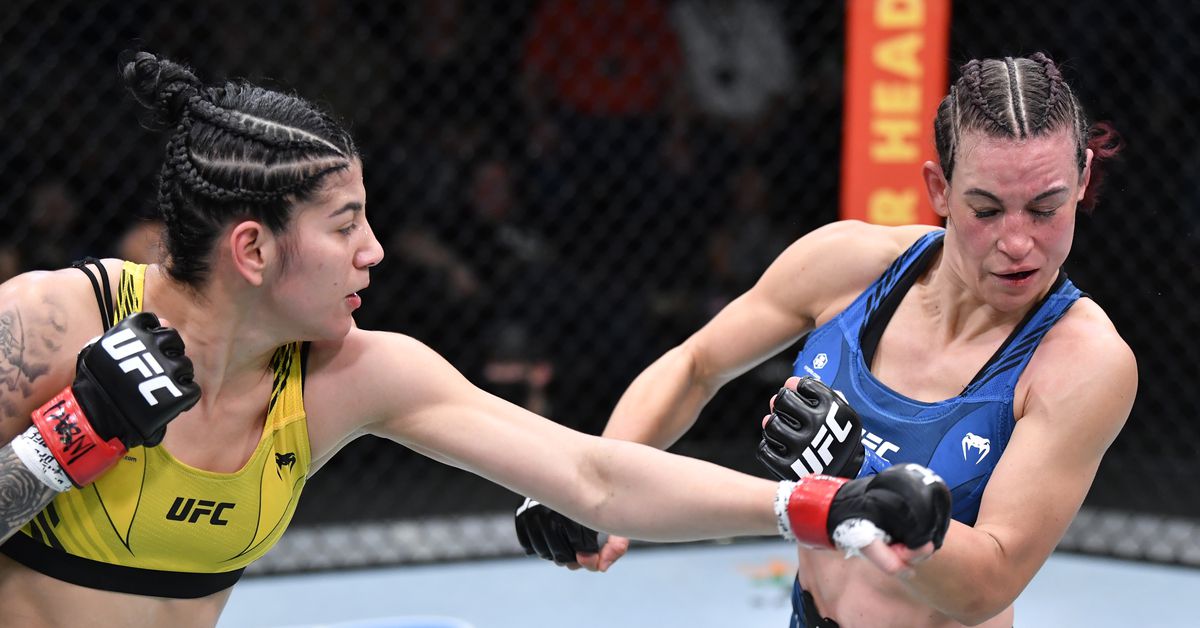 Ketlen Vieira may not have set the world on fire with her decision win over Miesha Tate at UFC Vegas 43, but the Brazilian talent still did all she needed to do to rebound from a tough start to 2021.

And according to Vieira, her loss to Yana Kunitskaya from back in February was partly to blame for a performance on Saturday that Vieira admitted wasn’t her most exciting.

“I was extremely cautious,” Vieira acknowledged Saturday through a translator at UFC Vegas 43’s post-fight press conference. “I’m still very bitter about my last fight. I really believe I won. The judges didn’t. So I came here [extremely] cautious, I realize that, but I’m still very happy with my performance. The emotions have nothing to do with fighting Miesha Tate, I just was hesitant because I didn’t want to lose again. I was very cautious not to make a mistake and the fight like I did last time. I was very bitter about my last fight.

Vieira, 30, suffered a controversial defeat at the hands of Kunitskaya at UFC Vegas 19. Fourteen of the 18 media scores on MMADecisions.com scored the bout for Vieira, however all three judges disagreed and instead awarded Kunitskaya unanimous 29-28 scores.

The sting of that February defeat was still in the back of Vieira’s mind as she went to battle against Tate, however this time around the close decision swung the other way as Vieira peppered Tate with power punches throughout the five-round bout and left Tate sporting a veritable crimson mask.

Even still, Saturday’s main event marked the first time in Vieira’s five-year UFC career that she went the distance against an opponent without scoring a single takedown. And when asked what surprised her most about Tate, Vieira was effusive in her praise for the former champion’s grappling acumen.

“Definitely her wrestling,” Vieira said. “Her wrestling and wrestling defense. After the first round, when I tried my takedown, I realized the wrestling was just not something I’ve [experienced before], that I had to watch out for. It’s definitely world-class wrestling. So the rest of the fight I was tentative not to be taken down anymore or take a shot. But she’s a well-rounded athlete, she’s a former world champion. If anything really did surprise me, it was her wrestling.”

Following a win over the highest-profile opponent of her career, Vieira’s name will likely shoot back into contention for the UFC women’s bantamweight belt.

The common train of thought heading into UFC Vegas 43 was that a win for Tate could propel her into a title shot against the winner of UFC 269’s matchup between reigning two-division champion Amanda Nunes and Julianna Pena. Now Vieira believes she deserves to be in that discussion.

“This victory puts me right where I want to be, back at the top, top 5. There will be a championship fight coming up soon, so I’m right where I wanted to be again. I’m back active, ready to go, and I’m looking forward to working my way back to the belt.”

As for the toughness she showed by eating many of Tate’s biggest shots and still marching forward, Vieira simply laughed and credited her upbringing in Manaus, Brazil.

“Guys, I come from Amazonas, where the toughest women in Brazil are, so I can take kicks to the face, whatever it is,” Vieira said with a smile. “As long as I’m standing conscious, I’m coming forward. You have to put me out.”

Derrick Lewis: ‘My Back is Against Wall. I Don’t Want to Lose 3 Fights In A Row’ | UFC Vegas 65
This is not the last we have seen of Israel Adesanya 👊
UFC 281 Embedded: Vlog Series – Episode 6
Charles Johnson on Zhalgas Zhumagulov win at UFC Fight Night 215: ‘I felt like I won every round’
Judge Grants Velasquez Permission To Wrassle